To Run Fast, You've Got To First Run Slow

The racing season looks to be making its comeback for the year with lots of races to choose from for everyone. For me, the Brooks half in two weeks time will be my second race for the year. Initially I had plans to 'attack' this race and make up for last year's horrible run bogged by a mid race injury flare up but now I'm using this race as a gauge to set up the next step in my marathon preparations.

My recent knee injury that had me seeing some down time for the month of January kinda scuttled whatever training plans I was cooking up. In hindsight, the injury was a good thing cos for one, I was forced to rest up completely and also had me take a step back to look at my training programme. The training plan I had cooked up was truly for a man much younger than myself and sticking to that would have been a nice setup for even more injuries.

The realization that I needed to tweak my plans to suit my age and capabilities coupled by the timely arrival of the 'Hansons Marathon Method' book came to the forefront of my mind. The book provided some very insightful reading, especially for someone who thought speed and pace was everything.

'To run fast, you've got to first run slow'

Those words in general was what stood out for me from the book. I have totally tweaked my training methods and will implement them properly right after the Brooks half which I'm going to use to gauge my current fitness level and work from there.

I'm nowhere near my best yet. The past month and a half has seen me being very cautious with my training. Things have been kept easy, the miles have been reduced and a lot of attention has been placed on the knee to look for signs of a recurrence. And my current weekly mileage averaging less than 30k a week is nowhere near to running a fruitful half marathon in two weeks time.

I'll be treating the Brooks half as sort of an LSD training session for me, which mind you, will be the first time this year that I've run anything close to that mileage. I've been keeping the mileage really very low for the moment, not wanting to take chances with the knee. The furthest I've run in the past month since my injury is 13k.

If things go well (fingers crossed), my training proper is going to start right after that. The key race that I'm targeting to see my hard labour pay off will be the Standard Chartered KL Marathon at the end of June. Goals and targets are already set, albeit a conservative one and all my training will be geared towards achieving it.

The current weekly Gold Coast training sessions organized by Jamie is a nice addition to my training plans. Though Jamie has some pretty 'torturous' after run additional workout sessions, I've been enjoying the group runs considerably. It's always so much less mentally challenging running with a bunch of like minded people than running alone.

With the right training and commitment, I believe I'll be able to meet the goals I've set out for myself this year. But if I don't, hey, no big deal, I'll just have to try harder. With that said and done, anyone planning to run with a slow poke for the Brooks half is always welcome to run alongside me ... LOL! See you all at Brooks!

The long Chinese new year holidays, while totally welcomed does bring some pretty difficult decisions for the wife and me to make. While I'm totally fine with running the entire week away, the wife says we can't be selfish and need to take the kids out somewhere.

Both of us don't fancy driving out of town and the only other option would be the malls. That's not something the wife had in mind. We decided to take them out somewhere outdoors. Unfortunately for us city dwellers, most of the good outdoor spots were a long drive away.

The first suggestion was to take them to FRIM, but I kinda vetoed that idea cos I didn't think the kids would hack it or even like it so we decided somewhere nearer. Putrajaya came to mind. Just a short drive away and there's some cool outdoor places to visit like the wetlands and the botanical park.

We started the journey there a little late but the weather was kind and stayed cloudy throughout. We headed to the wetlands park first (first time for all of us) and the place was basically devoid of people. Just a small handful of cars were seen at the car park with a smattering of people cycling and hanging around.

I thought it was a real pity cos the place was simply awesome. A nice canopy of trees, a well built road and pathway, which by the way is an excellent place to run with some pretty decent inclines and declines. There was even an off road (well, sort of) section consisting of a 1km stretch of loose gravel to run on.

The entire wetlands is believed to be the largest constructed freshwater wetlands in the tropics. For a city boy like me, it was something pretty exciting getting to get up close with the wetlands.

We walked around the place, catching sights of ducks and flamingos, checking out the flora and fauna and just plain having fun. At least, it looked that way for the wife and me cos the kids were already in this 'what? I thought we were going to the mall' mode and were already huffing and puffing from all the walking. I was more like cursing myself for not having my running shoes on cos I just wanted to run around the place. The wife who wisely had her GObionic on was teasing me about lending me her shoes to run in.

We gave the Nature Interpretation Centre a miss cos I wasn't about to experience the outdoors by going indoors besides I was eager to head up the 80m high (I think) observation tower before we headed out of there. This is where I encountered my first meeting with a cotton tree. I've never seen a cotton tree before and soon enough was frolicking around the cotton on the grass ... urrmm, I did say I am a city boy, right? We hardly get to see such things!

The boys were too afraid to head up right to the top of the tower even though there was a nice wide and safe stairway to the top. They stayed at the second level while the wife and me headed to the top. Good thing we didn't go to FRIM, what with some of the climbs there. The view at the top is pretty awesome, spanning out as far as the eye can see of the Putrajaya surroundings.

We left the place after about two hours spent there and headed to the botanical park located 10 minutes away. The botanical park was another pretty awesome place to be and was also another first time visit for us. The area covers over 92 hectares of ground and is home to some 700 species of local plants as well as from the African and Asia-Pacific regions.

I'm not going to bore you with the details about the park but to me this was way better than hanging out at some man-made mall. The place, just like the wetlands was pretty barren of visitors. Just a handful of people could be seen. I guess the malls were more attractive than being out in nature. This was like a natural mall to me. The air was crisp, well as crisp as one could get so near to the city. The chirping sounds of birds were so calming and the light breeze made it feel like we were out in some secluded habitat.

We only covered a small fraction of the place and had to leave after about an hour plus cos it was threatening to rain and the boys were totally bored and tired already. The wife and me plan to visit here again and cover the entire 92 hectares, this time I'll be in running shoes cos the place looked good enough to run in though I'm not sure they allow people to run here.

What really struck me as we drove towards home was the fact that there was hardly many people taking advantage of places like these. The two parks are beautiful and well maintained. Tucked nicely within the confines of this noisy and polluted city, it's a perfect place for some healthy outdoor recreation. A good place for a walk (or run) with nature, a nice picnic or even a stroll with a loved one, there's even boating facilities too!

Sadly, the boys were not too excited and I guess most kids from this generation would prefer the calling of a mall to the outdoors. Maybe it's all those iPads, tablets and stuff that are more attractive to these generation of children and I'm afraid one day the future generation will forget what the outdoors really feels like. That will be a sad day indeed.

Wishing all my running buddies who celebrate the festival, a prosperous Chinese New Year. To the rest who don't, let's enjoy the holidays and happy running :D 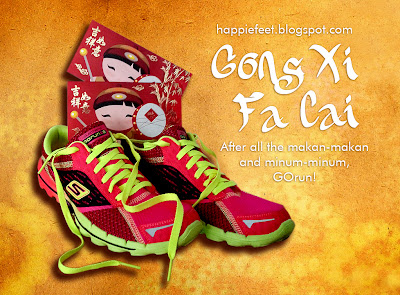