Running Can Be Expensive ...

You know, running can be quite and expensive hobby! I'm practically going broke from buying all kinds of running gear. When wifey and me go shopping, we simply cannot resist visiting sports shops like Adidas, Nike, Brooks, etc and we just cannot leave the darn place with either one of us buying at least one running outfit or something that has to do with running.

You don't even want to know how many running tops wifey has. I think she has every range of sport brand right down from Reebok, Asics, Nike to Adidas! I do have my fair share of stuff too. It's like an addiction. We always say to ourselves before we enter any sports outlet that we'll only browse but somehow, the moment we step in, something will always call out to us and we end up forking out some good money for a new running gear.

Just today, I walked into the Adidas outlet at Empire Shopping Gallery and ended up RM180.00 poorer from buying this gorgeous running outfit. I simply love it and can't wait to try it out this Sunday for one of our long run sessions. Like I said, running can be an expensive hobby! 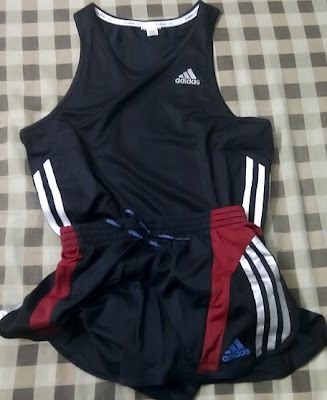 The Christmas season is really not good for me. I've been eating and eating and have been missing a few training sessions this entire week. Once the holidays are over, I'm going to be hitting the roads with renewed gusto.

After all, how many people can boast about running on the very same track that those elite F1 drivers race on :D Wifey has got herself registered for the 11K event and she's as eager as I am to run the race. She just happens to love running at nights.

I'm sure I'll be able to get both of us registered for a lot more races before the Energizer Night Race. We're both planning to take part in as many races as we possibly can next year and I plan to do a 42K race by year end (if I'm fit and brave enough, that is). It's something I really want to accomplish, hitting the finish line of an exhilarating 42K race.

I'm also looking forward to next year when the Brooks Ghost 4 hits the shores of this country. I simply adore the Ghost 3, which is my current running shoe (along with an Adidas). I'll bet the Ghost 4 is going to be an even better joy to run in :D But it's going to be along wait cos I heard from the Brooks people here that it'll only be coming in around June ... siggghhh ...
Posted by Nick Phillips at 3:51:00 PM No comments:

Wifey and me took part in the Asia Masters 2010 Road run this morning and I must say that while the crowd turnout was pretty lacklustre, we both enjoyed the run and even managed to get a finishers medal to boot :D

For wifey it was her first medal since she started running 8 months ago and I am so darned happy and proud of her. Eight months ago she would have balked at the idea of running and here she is now doing a 10K run with ease :D

For those not in the know, just like me, the Asia Master Athletics event is to keep the master athletics, from 24 Asian countries which is affiliated with Asian Master Athletics (AMA), fit and healthy and a reunion of old friends. This year the event was held at Bukit Jalil which started from the 6th of December 2010 until today.

In conjunction with the event, a race was held at Dataran Merdeka which comprised of 7km and 10km races. Both wifey and me took part in the 10K event and I must say the route was pretty scenic as well as challenging with some long steep uphill stretches littered along the way.

Good thing we were both familiar with the route as we took a drive a few days earlier to check out the route, which was a good thing mind you cos we knew how to pace ourselves throughout the run.

The run for me started out with a medium speed dash the moment the starters gun went off cos I knew there would be an incline about a kilometer or so away. I wanted to be ready to attack the incline as my mantra is, the faster you get the hills out of the way, the better the race will be :D Besides, I like attacking hills and resting on the downward stretches. That way, I can run at a faster pace on the flats.

Overall, it was a good race for me. While I may not be as fast as I was in my youth, I still broke my own personal best time crossing the finish line at 57' 14", taking off a full 2' 45" from my last 10K run which was the Nike City 10K run way back in October.

The only sad part about the race was the very few participants that took part. Wifey and me have been to quite a few races this year and they all had loads more participants that it was awkward seeing the very sparse crowd at this event.

I blame it on the fact that there was a lack of coverage for this event. Wifey only found out about it at the very last minute and being running fanatics, we just had to take part. Anyways, this was our last race for this year and we're already looking forward to a few races next year :D

Oh and I must say that I totally detested this FTAAA official who was blaring away on the microphone thinking that everyone there were total idiots. I don't even want to bother talking about her! She made my blood boil.

I finally managed to find myself a race to run in, well actually it was wifey who found the race :D We're both taking part in the Asian Master 10K this Sunday and we're really looking forward to it. We haven't ran any races since the Mizuno Wave run and that was eons ago.

I know there's the Malakoff run coming up soon but we're not too keen on that race. So finding the Asian Masters race was a blessing :D This will be our last race for the year and next year we intend to take part in as many races as possible.

We've both been training pretty hard all 7 months now and are fired up for next seasons races. I've got a few that I'm already looking forward to and hopefully I'll be fit enough to take part in all my planned races.

So, are you going for the Asian Masters run this Sunday?
Posted by Nick Phillips at 9:54:00 PM No comments: