Hydration On The Go

I popped over to the Running Lab today to see Frank to get myself a fuel belt. I normally don't carry water on me when I run and most times, though I know hydration is important, my runs turn out fine. Besides, during races, there are hydration stations along the way (well, most races anyway). But there are days, especially on longer training runs, when the weather is hot and the air is drier than the Sahara and halfway through the run, when the throat feels like sandpaper and craves for hydration is when I long to have water with me.

I'm not the kind to hide bottles of water along my preplanned route or to even hold a bottle in my hand while running. The routes I run also don't pass any convenience stores or sundry shops where I can stop for some fluids so most times I just struggle along in thirst.

A couple of months ago, I bought a Camelbak Fairfax and though I've tried using it on three long run occasions, I found it to be a little distracting and bothersome. While I enjoyed the benefits of having ice cooled (along with the ice cubes) water/Gatorade at my disposal, I was really distracted by the water sloshing sound and the shifting (no matter how tight I pulled the bungee) of the Camelbak. The unit has been lying in my wardrobe collecting dust since then. I don't know, maybe the Camelbak is just not for me.

So it was back to running without the benefits of available fluids. I do most of my runs in the late evening when I get home from work and it's a touch and go thing, especially with the weather. Evening runs can be pretty darn hot, humid and dry, especially if you live in my area where the traffic is heavy in the evenings with people heading home from work. The body will start craving for hydration pretty fast and the throat can dry up in a jiffy unless of course, it rained earlier, then the weather would be just about beautiful to run, with or without fluids.

Running without fluids tend to affect my performance and I finally decided to cave in and go look for something that I could bring fluids along in my longer runs on a hot evening that wouldn't be too much of a distraction and settled for the Fuel Belt Helium 4. After checking with Frank who told me he had stock, I went over today and got it from him. 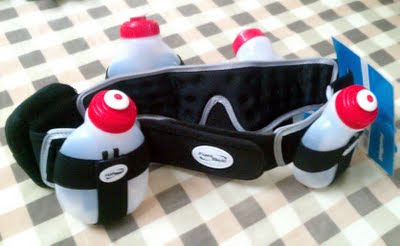 I like running with the least amount of stuff attached to my body and having this four bottles attached around my waist was giving me the hibby jibbies. I was pretty darn skeptical but couldn't wait to give it a try. So when evening came, I filled two bottles with Gatorade and the other two with plain H20 and headed out the door. It was pretty odd having four bottles hanging around me as I ran and I felt so darn self conscious. The wife said I looked like a suicide bomber ... hahaha!

Well, the verdict is, while it was a tad heavy, especially when full, it did serve its purpose of providing fuel on the run, though I'll only be using it for my really longer runs on a particularly hot day. I still like the feeling of running light. I find the fuel belt to be a little distracting and though the website said it would fit really snug, it still moved around as I ran, as Frank said it would. But at least now I'll have an option besides the Camelbak on a really hot long run session. Besides, the wife said she'll smack me on the head if I just keep it in the wardrobe since the thing is not really cheap ... LOL!

Anyways, what do you guys think? Is having hydration at your disposal albeit it being a hindrance a good thing or not? What do you do to solve your thirst on a particularly long and hot run?