I've never run sockless before. In all those years I've been running, I've always had to to wear socks. There wasn't any particular reason to it, it was just that I had to wear socks.

I wasn't too keen on the idea of running sockless but I did mention to the people at Skechers Malaysia that I'd try out their shoe with a sockless run. I wanted to try it out during the Brooks half but chickened out for fear of blistering.

So, I took the shoe out for two runs without wearing socks and my reaction went from awesome to ouch! The first run was a short 8K. It felt a little awkward at first since I've never run sockless before (really, I've NEVER run sockless before) but by the time I ended the run I was convinced that I've been missing out in life, sockless running wise that is. 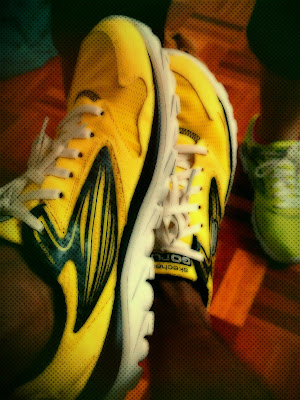 The shoe ran sockless pretty well. My feet hardly had any hotspots and it made the shoe feel even lighter than running with my socks on where I've always had that restrictive feeling from the socks enveloping my feet as I ran.

I tend to sweat a lot and I mean a lot and all my running attire are so darned efficient at wicking away sweat from my body and letting it trickle all the way down to my feet that my socks always end up getting so wet and heavy during long runs that it can sometimes be very distracting.

I thought my days of having to buy socks was over, at least until I ran the Standard Chartered KL Marathon Clinic this morning. It was a slightly longer run, around 14K and I came away from that run with blisters on my second last left toe and the sides of my arch! This is basically the first time I've had a blister develop in my feet in god knows how many years.

Started off the run pretty well, the shoe held out fine, no signs of hotspot and the feet were kept pretty cool due to the airy upper mesh. Then on the 9K, the first signs of blistering materialized and I knew I was in trouble. Kept on running and true enough, the feet was rubbing aggressively against the inside left arch area and the blister got from bad to worse.

I persisted until the end of the designated run distance which was close to 14K and was limping back to the car after the clinic session. The moment I took off the shoe, I saw the raw, painful red mark of a huge blister (see red circled area in picture below. Don't mind my dog, she's a cam whore ... LOL!). It hurt like a bitch to walk since it was 'strategically' located right at the lower bottom of my arch.

I'm not sure why the blister developed only on the left foot, maybe the shoe was not laced tightly enough or the feet were just too sweaty and was slipping quite a bit but I think I'm going to be running with socks from now on. I really dislike blisters (who does) and don't want to risk getting more though I did enjoy my brief flirtation with sockless running.

I'm not saying the shoe can't be run sockless, everyone's feet is different and maybe mine just isn't cut out for sockless running. I just might give the sockless running thing another go though, this time I'll slather on loads of body glide all over my feet and tighten the laces and see if that'll help. I liked the feel of sockless running so I suppose giving it one last try wouldn't hurt, or would it?

I guess the shoe would be okay to run sockless for shorter distances of 8K and below but I'd advise great caution if you're planning a long one!