I can't believe it has already been close to one and half months since I've been running with the Skechers GOrun and I've already chalked up more than 200 plus kilometers in the shoe. I know it's not really a considerable distance compared to some of the other hardcore runners out there but considering the kind of hours I'm keeping with my work, I'm pretty happy that I can even get in that much mileage.

Work has been pretty much hampering my running schedule and I do try my best to squeeze in whatever running time I can which literally translates to night runs cos by the time I'm home, there just isn't any daylight left to run. But I really don't have much complains about my late hours seeing as how the current batch of clientele I'm handling are sports and running related.

The past two weeks has seen me running around (pun intended) sorting out refurbishment arrangements for Wilson's (the tennis brand) store displays and also only last week saw me finishing up all the printing and supply of the Energizer Night Race bibs and runners guide pamphlets for the race next Saturday. These are the kind of clients that I enjoy working for :D

Anyways, after more than 200KM of running with the GOrun's, I must say that I'm positively, truly, absolutely liking the shoe. My running form has improved tremendously since I've put on the shoe 45 days ago. Please bear in mind this is no suck up to Skechers Malaysia posting but my own experience and take on the shoe.

Everyone of us is different when it comes to running shoes. Some can use a particular shoe with hardly any issues and some just can't. Some will swear by a certain shoe brand and some will curse. Some will say a shoe doesn't really affect the way you run and some will disagree. But whatever you opinions are, running shoes are very personal, in my opinion anyway.

I was totally skeptical about Skechers as a brand, especially in terms of running but am glad that I let the wife convince me to try GOrun. I haven't looked back since. I'm not going to go into details about the specifications of the shoe, you can always read my post about it here and here or even Jamie's initial take on the shoe but what I'm going to talk about today is how the shoe has performed and the benefits I've reaped from it.

Like I said earlier, I've so far covered 200 plus kilometers in it. Most of them have been for training runs of various distances and speeds with one half marathon race thrown in and I have yet to find a single major fault with the shoe. Granted, there are one or two things that I would like improved with the shoe which I'm hoping to see in the coming updated version of the GOrun but otherwise it has been an excellent shoe, at least for me.

My runs these days have been virtually pain free, with a post run recovery rate that is excellent to say the least. The legs recovery almost instantly and I'm ready to run again within the hour. All the injuries that I had, especially that nagging and oftentimes painful thigh pain that has been plaguing me for my runs has completely gone. The aches that develop in my ankles midway through a long run are now a thing of the past.

I'm running better, my gait and posture have improved, granted I still drag my feet when I'm exhausted but otherwise my runs are more efficient with hardly any wasted energy. I don't have to put out as much effort as I have in my runs as before and feel much more refreshed after my runs than ever before.

At first I thought it was just a psychological thing, but over time, I discovered it has to do with the shoe. If you've run in the shoe, you'll know that it's virtually impossible to heel strike. You're constantly mid-footing and in turn, you're running with much less effort and less energy wastage, as far as I'm concerned anyway.

I've alternated the shoe with my other training shoes to compare the difference, namely the Green Silence, Pure Connects and the Launch and they all made a considerable difference to my runs. The verdict, Green Silence - still one of my favourites but was a little stiffer to run in. The Connects - a pretty narrow shoe that had my feet squashed but still a fast shoe to run in. The Launch - damn, that shoe just turned out to be impossible to run in after prolonged exposure to running with the GOrun.

One thing in common with all those shoes are that my recovery post run was so much slower. The calves hurt way longer but the Launch was the most surprising of the lot. They're actually light weight trainers but when I ran in them, they felt like a brick! I guess the extreme lightness of the GOrun had something to do with it. I'm so used to the weightless, almost barefoot feel of the shoe, that anything with a lot more cushioning and heavier feels harder to run in.

But as light and soft as the shoe may be, it's actually also pretty durable. I've trashed the shoe in all my runs, I've been very rough with it and it has come through just fine. The outsole is so durable that it's hardly scuffed or worn out, even after 200 plus mileage to it. The GOimpulse sensors are still in pretty darned good condition as the picture below can attest to. 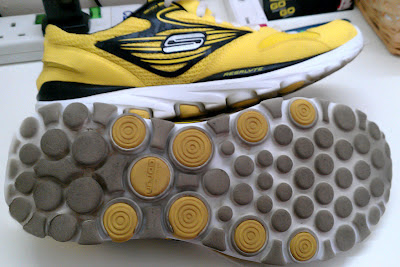 The sensors look as new as the day I first ran in them which speaks volumes for the outsole. They really are so much softer than my other shoes that at times, you can actually feel the pebbles and stones while running. Unfortunately, that's also a point that peeves me about the shoe. Those round pods tend to attract small stones which get stuck in between them and they sometimes have me stopping to dislodge a larger pebble or two! I understand from Skechers that the coming upgraded model has addressed that issue.

With that said and done, I can safely say that this is my shoe of choice for the upcoming SCKLM where I'll be running to complete my first ever full marathon. I know the shoe is definitely good for a half marathon and judging by the way it's been working out for me, I'm taking a chance that it's just as good for a full marathon too. Like I keep saying, Meb can't be wrong, can he?

But once again, a word of advice, which I'm sure Jamie would agree, is to go easy on the shoe if you're planning to get one. Strengthen those legs, go slow with some easy runs for a few weeks before really taking full advantage of the shoe. Like I said in one of my earlier posts, the shoe isn't for everyone. Some of you may just like it and some of you may just hate it. As for me, I'm a convert and a firm believer that Skechers is heading in the right direction, running wise, that is.

The only problems I have these days is giving my other six pairs of running shoes some fair running time seeing as how I'm always picking the GOrun for my training sessions!