A Ride In The Rain

I had the opportunity a few months back to run with the Skechers GOrun in the rain and the shoe impressed me with it's rain wear durability and performance. I came away happy knowing that the shoe wouldn't pose any problems in the rain.

I've had the second iteration of the shoe, the GOrun Ride for quite a while now and have put in some decent mileage on it amounting close to 100km with it so far. I've used it in all kinds of surface conditions such as roads, gravel, race tracks, concrete and grass. I've used it for all kinds of training programmes such as intervals, tempo, speed runs, LSD's, hill, etc. I've even used it for an 11.8km race (actual distance was really 12.4km) and it's come away as a very impressive shoe as a 'minimalist' trainer for me.

One thing I've never had the opportunity to do was test the shoe in rain. Well, that opportunity presented itself this morning. I went for my usual Saturday morning run with my best buddy, Sean and it was drizzling very lightly when I arrived at his house.

We decided to push on and go for the run optimistic that the rain wouldn't get heavier. Hardly a kilometer into the rain, the skies opened up and the rains came down pretty heavily. We debated on going back but thought since we were already awake and out running, we would just push on, as long as there was no lightning. Now, that's a big no-no in running for me.

Since the rain was pretty heavy, I took it as the perfect opportunity to put the GOrun Ride through a very wet weather test. I intentionally ran in puddles, on slippery surfaces and even on some mud spots just to see how the shoe would hold out. 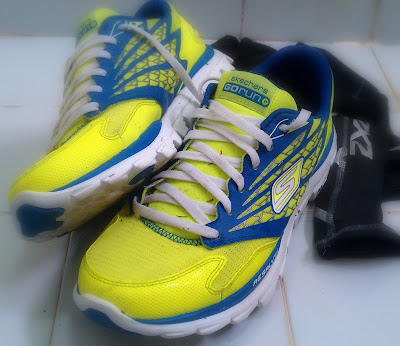 I was actually waiting for the shoe to get totally soaked, soggy and heavy and start affecting the run but to my surprise, that didn't materialize. Granted, the shoe got a little heavier than normal but otherwise I hardly noticed it at my feet. What I noticed more was my soggy socks!

The grip was phenomenal, without any slippage even on extremely wet road and concrete surfaces. Even running in ankle deep puddles of water hardly affected the performance of my run. We ran slightly over 8km in pouring rain and stopped only cos my running buddy felt a tug in his ankle and we decided not to aggravate it.

In that short 8km, I hardly felt any discomfort with the shoe and am confident that it would have performed just as well if we had ran our actual planned distance. I'm glad I got the opportunity to try out the shoe in really wet conditions and would have to say that the shoe handles really well in the rain.

The water dispersal was pretty impressive and it hardly retained any water in the shoe. In fact, after the run, my socks were much more heavier than the shoes! The rain was pretty heavy that it washed away all the dirt as I ran, as you can see by the very clean looking shoe in the picture above. It shows you how heavy the rain was :D

With that said and done, after close to 100km with the shoe, I'm actually liking it a lot as my training shoe, of course I totally love the color scheme of my current pair too :D For those who want a nice, lightweight and flexible shoe like the GOrun but didn't like the GOrun cos of the 'hump' in the arch would love this shoe. It's almost as minimalistic and as light as the GOrun but with slightly more cushioning.

I think it's already available at all the Skechers outlets here, so do give it try if you're in the market for a new shoe. I highly recommend it.