Whatever 'bomohs' (shamans) the organizers engaged for Putrajaya Night Marathon 2012 to keep the rains away definitely earned their keep last night!There was nary a cloud nor breeze in the air after the earlier dark skies with thunder and lightning just an hour before race start. And this after continued evenings and nights of nonstop rains.

Everyone was expecting a wet race but that never came to pass and we all had to run with the 'lovely' heat and humidity of a night run. A windless and moonlit night didn't help matters either.

The thought of not being at the start line crossed my mind quite a lot as I was heading home from work earlier in the morning before the race. I was totally fatigued, hungry and most of all sleepy. Not the most ideal of conditions to be attempting a marathon later at night, especially for a marathon noob like me. The wife was also pretty stern with wanting to evaluate my condition after I wake up from whatever sleep I could muster before even letting me attempt the marathon.

Though hardly enough, I managed to muster close to 3 solid hours of sleep. After guzzling down a bowl of instant noodles (I know, not the best of marathon food either) but at that time I wasn't hungry and forced myself to eat something. Feeling fine, the wife agreed that I would be able to start on the condition I don't push myself too much and to stop completely if I wasn't up to it. She didn't have to worry though cos it wasn't likely that I could push myself much even if I wanted to. 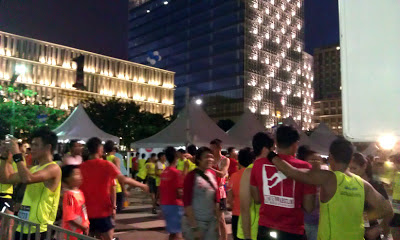 So off we went to Putrajaya and arrived two hours before the race start to get the best parking spot. Lingered around catching up with friends I only meet at race events. Met a few new friends too like Jason (Tan), the oldies (and I don't mean in age) like Neoh, Wilfred, Gus and the highly suspicious non-human, Rayzeef ... LOL!

Bumped in the Skechers team of Ivan and Adeline (who was running the 10K event), chatted for a bit and moved on in search of food cos I started feeling hungry. Managed to find some skewered fish ball like stuff and wolfed the entire three sticks down. Hopefully that would be enough (highly unlikely) to tide me through the distance.

Did a couple of warm up loops, wished the wife all the best for her 21K before heading to the pen to await the start of my second marathon attempt. Being a marathon noob, I felt a little overwhelmed being among the many seasoned marathoners. Thankfully Neoh, a seasoned marathoner himself was there to keep me company. The race started and we took off together keeping a constant pace of 7 minutes. Managed to catch Lina and her hubby along the way walking to the start line for their event start.

Kept pace with Neoh till about the 10K mark and decided to step it up a little since I was feeling pretty good given the circumstances. By this point the route already had the half marathon elites lapping me left, right and centre. Since I left the company of Neoh whom I had a nice time chatting with all the way up to then, I knew it was going to be a little boring and a lot more demanding, especially on a route littered with rolling hills. True enough, I came to the first set of rolling inclines, cursed, kept to the same pace and just trudged up the inclines.

By this time I started reeling in quite a bit of the earlier marathoners who started off on a faster pace. I was actually surprised that I still could run without too much issues. I had on the Skechers GObionic, which was a little tough on the feet but wasn't a big issue though I'll be switching back to the GOrun Ride for distances longer than 21K. The legs and lungs were fine and the most surprising of all was the heart rate which was hovering along the 145bpm. Nice, I was expecting it to be hitting the roof!

Those of you who have run this PNM marathon route would know just how challenging and demanding it is with the rolling terrain and the killer incline stretch from KM33 to the finish. Every time I ran up an incline and thought that was it, another was waiting just around the corner. It just didn't let up. I kept my head and grit my teeth and just faced them head on. It wasn't easy. The sleep deprivation started cropping up just around the 21KM mark and I was seriously battling from wanting to just stop and curl up along some quiet corner of the road and just sleep!

By the 27KM mark, I was feeling the fatigue. Slowed the pace a little and kept moving. I was bracing for the the 30KM to see which would come first, the wall or the cramps. Surprisingly neither appeared which was a good sign though I was struggling from fatigue more. The mind was completely numb by this point that if you asked me my name, I wouldn't be able to answer you. A lot of run/walking happened from this point onward, especially from the 33KM killer stretch! I even had time to exchange a text or two with the wife ... hahaha!

There was just nothing left in me to tackle the hills and it was the longest 6KM stretch to the finish in my entire life! A big thanks goes out to Jason Tan for his much appreciated support and cheer group at KM36 and for the ice cold coke you provided! It was the most refreshing drink I had the entire distance and the support you and your friends dished out helped me find whatever little reserves left in me to push on to the end.

I was seriously out of it by then and I had to make a conscious effort to keep going. Looked at the Garmin around the 39KM and saw that I could better my SCKLM time and decided to just go for it for the last 3KM. Picked up my pace and crossed the finish line with a time of 5:12:25! I was ecstatic considering the condition I was in. I gratefully accepted my much deserved medal, picked up my goodie bag and went off in search of the wife.

We didn't hang around long, walked to the car, bought some much deserved dinner on the way home and slept like a baby till noon today! The race organzation was spot on. I have not a single bad thing to say, well maybe some skimpily clad cheerleaders along the lonely and boring full marathon route would have helped ... hahaha! Otherwise the water stations were exactly where they were supposed to be which helped with my gel taking sessions. The transition from getting your medal to collecting the goodie bag was so seamless and hassle-free. A big congrats and thank you, Mr. Organizers for a race well run.

No more marathons for me until next year SCKLM. I've learned a lot more this time around and now know that with the right amount of training, I'm confident of breaking into the sub 5 hour race bracket. I intend to sit out a lot of races next year and spend the time putting in more training and effort in my quest to run a better marathon. The term, quality more than quantity is going to be my mantra for next year.

With that said, good job to each and everyone of you for actually being out there running, walking or crawling instead of just sitting on the couch or partying the night away. You all did awesome!