I have this saying, you need to try something at least once in your lifetime which was why I signed up for the Powerman Asian Duathlon Championships 2012. I was on the verge of signing up for the sprint event even though I would have probably had to put training wheels on my bike when my buddy Sean came to my rescue.

He suggested I take part in the relay event and managed to find a rider for me while I do both the run legs. I heaved a huge sigh of relief at the prospects of not making a fool of myself trying to cycle and falling into some 'longkang' somewhere and relished the idea of doing both the run legs.

Things were put into motion, I signed up for it and though I only met my team-mate half an hour before race start I was looking forward to the event. The wife decided to tag along and lend her support to me, which I truly appreciated cos she actually wanted to run the CICM half marathon instead. We got to the race location early, like we always do for most races to get the best parking spots. 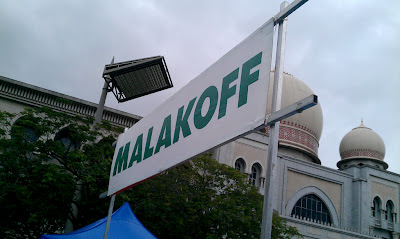 The place was already crawling with participants pushing and setting up their bikes into the transition area. To be honest, it was a little overwhelming. I felt completely out of place. I'd normally see loads of faces I'd recognize during a typical running event but it was different here, everyone looked foreign to me. The faces were unfamiliar and they all looked like professionals, which some of them actually were. The atmosphere was totally different as well.

I was overjoyed and glad when I saw Ray, finally a friendly face. Chatted with him for a bit before heading off to the transition area to get acquainted with my team-mate. After settling in and exchanging details about how long we would take to complete our respective legs, I headed for the loo which was when I saw Jamie, another familiar face heading to the transition area.

By the time I got back, the individual category participants were lined up and ready for their start of the run leg. Watched them flag off and got into place for the relay flag off. The weather was excellent at that time of the day and once we were flagged off, all the prior reservations evaporated. Time to dig in and concentrate on the run.

Game plan called for a tempo paced run for the first leg and managed to achieve it with a slight glitch that threw off my concentration when I discovered it was a 5k loop route. Damn it, Nick! You really need to read your instructions properly!

Aside from that, the first run leg was pretty good. The route was fairly easy with only a small 200m or so incline just before the finish. The water stations were more than adequate. I told my team-mate earlier that I'd be back in an hour and I came in exactly in one hour on the dot. Now came the hard part. The waiting game. I had approximately two hours to wait for my team-mate to get back.

Caught up with Jamie for a bit, then headed off in search of the wife who was busy snapping pictures of everyone. I couldn't sit idly for two hours so decided to walk around the place. Met with more familiar faces like Jason, Nithi and his crew and some new ones like Yvonne and this guy I didn't get his name who was also doing the relay which I was chatting with for a bit before heading to find the wife again. She was having a blast taking pictures of all those hunky looking elites and showing them off to me ... LOL! And here I thought I was hunky!

Besides that there really was not much else to do except wait. I was getting restless and the waiting was drastically cooling me down and putting me into a very relaxed state, which was not at all good. The muscles started feeling tight. Kept moving as much as I could but it wasn't helping much. Nothing I could do about it though.

The weather was also a concern, with signs of the sun peeking out from the clouds so when Jamie felt a drop of rain, we both had our hopes up instantly. It started to drizzle just as my team-mate zipped in on the two hour mark catching me by surprise. I was not prepared. Scrambled to exchange timing tags, grabbed my cap and bolted out of the transition area. True enough, the body was too well relaxed to actually get into proper running form. The legs and muscles were tight and it was a struggle.

The drizzle got heavier which had me inwardly smiling. Now that was more like it, God really is a runner after all :D But it was not to be cos after a kilometer plus, the rain stopped and the heat that was coming off the road was horrible. The sun decided to join in and make the place even more humid and hot! My pace was instantly affected and dropped a couple of notches.

I had to stop at most of the water stations and pour cold water all over my head to keep cool. I was heating up too much and I knew from that point on the race was going to get difficult. I just grit my teeth and concentrated on just finishing the darn leg. By the time I got to the second loop of leg two, I was crawling along just waiting for the finish to show up.

Seeing the finish after struggling along in the rising heat was a joy to behold! I took my medal (all 3 of them), got my timing chip unhooked from my ankle, gladly accepted the ice cool towel and water and headed off to find my team-mate, who strangely was nowhere to be seen. Unofficially, I think we came in around 4:11 - 4:15 but will have to wait for the official results to be certain.

Took my stuff from the transition area and joined the wife, grabbed some of the free food entitled to the participants and waited for Sean and Kelvin to cross the finish. Said my goodbye's once they were in and finally headed home for a much needed sleep.

Did I enjoy the event? Yes, I did. It was an experience to remember. Would I take part again next year? With the right rider and only doing one run leg with someone else doing the second leg, yes, I would definitely take part again. Would I ever do a full? Not in my lifetime and especially not with my child like cycling skills.

But one thing I have to say is that these guys truly deserve to be called POWERMAN cos damn, for the hell they went through with doing the run, cycle, run legs on their own, nothing else better describes them. It's a herculean feat and one I don't think I could match even on my 'bestest' of days!