This morning's Newton 25K Challenge marks the last and final race of the year for me. Running wise, it has been a pretty good year which I hope to bring along into the year 2013 as well.

The Newton 25K Challenge is strangely a race that happened twice in the same year. Earlier in the year, January 1st to be specific, I ran this race for the first time and for reasons only the organizers can comprehend, I'm running it for the second time this year.

The build up to this race actually had me pretty worried about running it and could have possibly been my first DNS of the year. Three weeks prior to this run, I sustained an injury to my ankle. Being a stubborn headed person, instead of resting I kept on running, even doing a trail run at that and kinda made it worse.

Two weeks prior to the race saw me forcing myself to rest and only managing a measly 25K for the entire two weeks training session was not a good indication of doing well in the race and the fact that the ankle was healing pretty slowly was also worrisome. Thoughts of not starting were being considered but thank god the forced rest helped with the healing.

I was glad that I wouldn't have to pull myself out of the race but coupled with the Christmas merry making and the enforced rest, my stamina took a dip in form. I would just have to rely on my determination and resolve to better my previous timing during the first edition of this race as my motivation. It wasn't going to be easy, mind you.

I consider the Newton route as one of the most, if not toughest, race routes in the entire Klang Valley. With countless steep rolling hills greeting you one after another and with 'Ammah Hill', that bitch of an incline thrown in, it would take a lot of 'pain' to get through the route. The only ace I had was that I've run this route before and knew what to expect but it didn't make it any easier.

I had already planned to go easy this time around, taking the ankle into consideration but wanted to also make sure I could better my previous timing. After all, I wanted to end the race year on a good note. The race started on time. I started from way behind and it took me close to 3 minutes to cross the small start arch.

Once through the arch, I took on an easy 6:40 pace, not like the previous edition where I was caught up with the other enthusiastic runners and went out way too fast only to see me suffer towards the later stages of the run. Besides it wasn't as flat a start as it looked cos there was a long incline immediately after the police complex. And true enough, there were already quite a number of runners who started off way too enthusiastically walking up this stretch.

There were three slight changes, for the better if you ask me, to the route keeping it more confined, especially with the doing away of the previously boring Persiaran Lestari Perdana stretch but another steep incline was put in to replace that stretch. I guess you can't win them all.

I wasn't having too much problems with the race until the 16K when the ankle started acting up. Slowed down the pace a little to alleviate the slight pain. At that point, I was worried that it was going to ruin my run completely. It started to hurt a lot more especially when I was running downhill and couldn't speed up as much as I wanted to. I had to actually run much slower on the downward stretches while everyone else was burning rubber downhill ... siggghhh ...

Thank god though, that once I got back to the flatter terrain and even the inclines, the pain was a lot more muted. I decided that I would speed up during these stretches as much as I could without totally damaging the ankle. The only good thing was after the 20K mark, it was mostly flats and I could get up to speed. Ran back the last 4k with a much faster pace and squeezed in across the finish with a time of 2:36 taking off close to 14 minutes of the previous edition of this run though it was an under-distanced race. 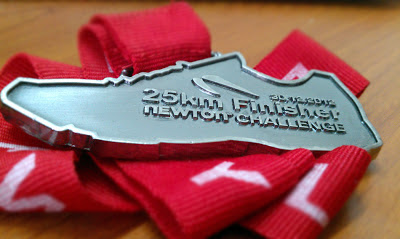 I don't have much to bitch about the race though I would have preferred if they did provide Isotonic drinks at the water stations or at least every alternate station instead of the measly one station around the 17K (I think). Water alone wasn't cutting it for me. I guess Isotonic sponsorship was a problem. Overall it was a decently organized race and I had fun, well as much fun as one can have trying to negotiate one incline after another ... LOL!

A big congrats goes out to the wife for attempting and finishing her longest distanced race to date. Well done, honey :D You've come a long way since you started running and I'm looking forward to seeing you do a lot more!

Met a lot of friendly faces before, during and after the run, which is always a good thing. I decided at the last minute to switch my race shoe from the Skechers GOrun 2 to the more tried and trusted GObionic which performed exceptionally well as always :D The GOrun 2 will have to wait till next week for me to race test it at the MPIB run, my first race of the new year.

And that concludes my races for this year. I'd like to take this opportunity to wish each and everyone of you out there a blessed New Year and may we all keep on running happily and injury free!