Back in the older days of running, a runner mostly relied on water or some sports drinks as their primary carbohydrate supplement for their half marathon or marathons. These days, with a better understanding of sports nutrition especially in relation to how glycogen is used during a marathon, we now have a plethora of products from which to choose from, designed to speed glycogen to our working muscles.

Among the many types of products available out there, I for one rely on consuming my fair share of energy gels at specific intervals during a long distanced race. It works for me and does give me that little extra push I need at the right time, well most of the time anyway.

I belong to the older batch of runners who ran races with just water and whatever sports drinks were offered at the water stations. Back then, gels were something you used for your hair and not to consume. It's only very recently, close to three years ago, when I picked up the running bug again that I started using gels in my longer runs and races. Ever since then, I don't leave home without them on race days.

I currently and as far back as I can remember, take the GU brand of energy gels. I've never really tried anything else, well save for the Power Bar brand which I found to be a little too sweet for my liking. The GU brand has worked for me since day one and I didn't see any reason to try out the rest of the brands out there. Who knows though, I could have been missing out on the benefits of some of the other brands but I was content to live with my good old GU energy gel.

I've experimented with seven of the flavours and so far found my favourite ones in the Lemon Sublime, a non caffeinated flavor and the Tri-berry, a caffeinated flavor for days when I need that extra push. The only peeve (which I could live with) was that the GU brand was a little too thick and I had to really time it well to coincide with water stations during a race or risk have a very sticky and dry mouth. 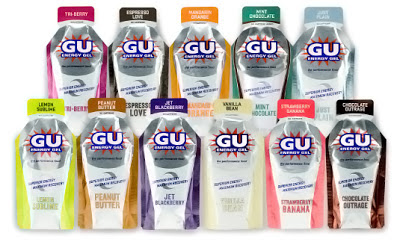 But during the Standard Chartered KL Marathon, somewhere around the 30km mark, they were handing out an energy gel called Maxi Fuel, which of course I didn't know back then cos I was in too much pain from dealing with cramping to even remember what my name was let alone an energy gel.

What I remembered out this particular gel was that it was nice and watery making it easy to consume. I didn't even need a drink to wash it completely down my throat. The taste was not too bad either, with a lemony tinge to it. Though I really couldn't gauge how beneficial it was to me cos with the excruciating pain I was in, even if God himself came down and offered me some miracle gel concoction, it still wouldn't have benefited me in any way.

But I made a mental note to find out what brand it was they were handing out and to get more of it to try out since I liked the more liquid feel it had. After some inquiries on Facebook, Eugene informed me it was called Maxi Fuel and they were selling it at Athletes Circle. Unfortunately I procrastinated for months on end in getting myself some. I was also a little worried about breaking the balance I had with the GU's. Yes, I'm superstitious that way. I find it hard to change my habits and afraid that incorporating something new to my regular stuff would somehow ruin my running mojo ... hahaha! 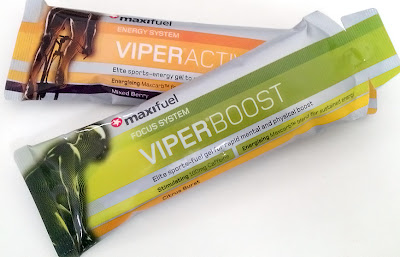 But the perfect opportunity came with the recently concluded Putrajaya 12 hour walk. I reckoned since it's a walk, trying out a different gel or routine wouldn't count to messing with my running mojo and purchased 4 sachets of Maxi Fuel, 2 caffeinated and 2 non-caffeinated flavors. They weren't cheap (at least for me), mind you. They cost RM9.50 a pack and I take an average of 5, maybe 6 GU's for a full marathon distance. Good thing it was on promotion and I got a nice 10% discount.

Come race day, I was all eager to try them out since they did make an impression on me during the StandChart Marathon even with the pain I was in. Since it was a walk and I wouldn't need them so early in the game, I decided to keep them in my pouch till somewhere around 2 plus hours into the walk when I ripped a sachet open and poured one into my mouth.

Expecting to experience what I savored during the StandChart marathon, I was mildly surprised and disappointed that it somehow tasted different, not at all to what I experienced. Okay, maybe it was a different flavor. I'll wait till the next two plus hours and take the Citrus Burst flavor instead. That was the flavor they were handing out during the marathon so it can't be all that different.

No such luck, it was just as bad tasting as the previous one (no offense intended to Maxi Fuel themselves). Even though it was way more liquid like than the GU's, I was having trouble trying to take it all in. Maybe this being a walk event I wasn't as tired as I was during the marathon and was more aware of things unlike the marathon where if you had offered me horse pee, I would have said it tasted great ... LOL!

But that said and done, I'm still going to give this a second chance cos I like how liquid it is and still have two more sachets which I will take during the Newton 25K Challenge at the end of the month. On the positive side, it didn't give me any stomach upset and maybe the taste just needs to be acquired.

So, what's your favorite gel or are you one of those who just run on water?