To cut a long story (and I can be really  long winded) short, the Skechers brand of running shoes have found a very close place in my heart. Aside from the occasional runs in my two other favourite shoes, the Brooks Green Silence and Pure Connect (which are now just collecting dust actually), I don't own any other running shoe brand aside from the entire Skechers GOseries.

The GOrun, though being a slightly weird little shoe holds an extra special place in my heart cos I ran my inaugural marathon in that shoe. Great to run in but painful to walk in with the 'bump' in the arch. While the shoe was simply great, the 'bump' was so pronounced that a lot of runners had issues with it and that kept the GOrun from being a great shoe.

As usual, the color range of the Skechers shoe ranges are pretty striking, sort of like a trademark for them. I've always been a sucker for glaringly bright shoes and am drooling over the wife's color scheme of the shoe which simply exudes character unlike the really quiet and shy  looking black one that I have! (Hint, hint Skechers ... LOL!) Anyways, the review you read below also has contributions from the wife on her take of the shoe as well.

The GOrun 2 is touted to be designed for speed, promoting a midfoot strike. Constructed of a nearly lightweight synthetic and an almost seamless mesh fabric upper, the shoe weighs in at 6.6 oz for the men's size 9 which makes it radically lightweight for a shoe in its category. If you loved the upper of the original shoe, well this is even better.

The toe box, constructed of a 4-way breathable stretchy mesh fabric gives it a very roomy feel. The roomier forefoot and extra space it provides helps to reduce friction with a better toe off allowing for a better spread of your toes, at least that's what Skechers say cos for the life of me, I don't really know if my toes do actually splay out all that much.


One thing I noticed (the wife too) is that it fits a little narrower than the original. Though the fit didn't affect me at all, it did play a part with the wife. Her shoe got just a tad too tight around the edges after feet expansion during longer running and I'm thinking a 9.5 for her would solve that (I wonder if Skechers carry half sizes over here). The soft and smooth lining provides for sockless running and even removing the insole, you're still good to go running sockless though I'm taking the wife's word for that since I don't run sockless.

Skechers have retained their proprietary lightweight injection molded Resalyte™ Midsole with memory retention to help absorb impact. With the same 4mm heel drop as its predecessor, the GOrun 2 gives you as close to a natural barefoot experience as one can actually experience with a shoe though I'm not too sure about that yet cos with the old GOrun, I could actually feel the road. With the GOrun 2, it seems to be a little muted. Maybe I'm so used to the Bionic's zero drop that I'm comparing it against that shoe which is largely unfair.

One thing that I'm loving about the shoe is the non-existent (it's still there but you don't feel it) 'bump' you felt pushing against your arch in the original. This makes the shoe so much more bearable to stand and walk in. I remember using the original for the SCKLM marathon. While I was on the run there was no issues, but when the cramps hit and I had to walk from time to time, let me tell you it wasn't a pleasant experience. For those put off by that in the original shoe is going to love GOrun 2 with the totally negligible arch.

The outsole still retains the independent circular GOimpulse sensors. These sensor offer flexibility and feedback for a more responsive running experience. This time around the sensors are much more widely dispersed and solved the annoying issue of having pebbles and small stones getting stuck between your soles while running. Throughout my runs with this shoe, not a single pebble or stone was stuck between them unlike the original where you would find me digging out stones from them after every run and sometimes even having to stop mid run to dig them out! The GOimpulse pillars have shrunken in size and are a lot more with 13 lugs compared to the original's 9.

The heel counter seems a little higher than the original and holds your heel in place nicely without the worry of your heel slipping out mid run. The wife has more mileage with the shoe than I have but the first time I slipped my feet in them and took them out for a short run, I set a personal best in them for a 5k run. 'Designed for speed', hell yes! And I was nursing an inflamed ankle at that, though I did get an earful from the wife for being an idiot and running with a busted ankle! She loves the shoe but says it would work better for her if she could size it up by half a size and I just might hit the stores to see if they carry a 9.5 and get one for her.

My impression of the shoe is that it would definitely appeal to the masses who liked the original GOrun but was turned away because of the 'bump' in the arch. A much better shoe than the GOrun Ride (and that shoe is no slouch either) and looks capable of running a marathon in though you'd have to wait till next year for me to test that theory out. I'm totally sold with the GOrun 2 and will be giving it a race test during the coming Newton 25k challenge at the end of this month. I'm guessing the shoe is going to come through it just fine, well as long as my ankle holds out that is.

Would I recommend this shoe for everyone? Yes, most definitely I would. A good, lightweight, serious minimalist shoe that works great as a transitional shoe to foster as close to a barefoot running experience as one can possibly get short of running with a zero drop shoe or actually going barefoot. 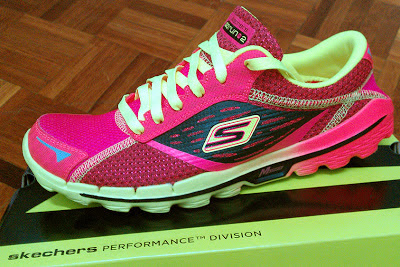 The shoes are already available in the stores (a pre-launch), the women's version anyway. I'm not sure when the men's will be out but I do hope they bring in the more striking color themes. I've got my eye on these two awesome and loud looking colors!