About a week or so ago, the wife out of the blue said to me,

First of all, I'm not a trail running kinda person and definitely am not into hiking as well. Give me a nice (flat if possible) road anytime and I'll be happy to clock some miles on them. Secondly, I have no inkling in hell as to where Broga hill is located. So I gave her this not very interested look and told her I'll think about it. Besides I don't own a single pair of trail shoes.

But as fate would have it, Skechers Malaysia decided to launch their GO series range of trail shoes, the Skechers GOtrail Minimal. Dropped a note to Adeline to inquire when exactly the shoes would hit the stores and she said there would be launched the very next day and told me to come by to pick up a pair if I'm interested in trying them out. 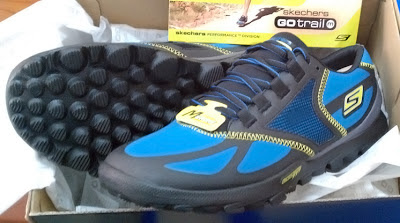 How could I say no :D Went over the next day, picked up a pair both for me and the wife and guess we were going trail running after all since I was eager to try the shoes out. Now, let me get one thing clear, I have absolutely no experience in trail running and neither know head or tail about trail shoes. This review will be based purely on my first ever totally layman's view of a trail shoe.

Maybe I'm just ignorant but my impression of trails shoes are that they're heavy, thick and hard. So when I first picked up the Skechers GOtrail, I was impressed by its weight. But then, this is from the GO series range of shoes, so the lightness was to be expected.

Weighing in at 8.4 oz for the men's size 9 and with a 4mm drop, the Skechers GOtrail is categorized as a minimalist trail shoe. It's still as flexible as the rest of the shoes from the GOseries range, easily passing the 'bend the shoe in half flexibility' test which was a little surprising seeing as how the outsole, called Resagrip, a similar outsole to the Resalyte sole for the GOrun series of shoe but much more durable, looks pretty tough and rigid. 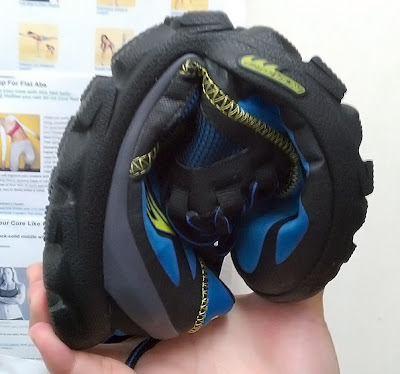 According to Skechers Performance, there is a thin rock diffusion plate embedded in the outsole to disperse the pressure provide lightweight protection for your feet from the uneven and rugged trail terrains. I guess it offers protection from rocks or sharp objects but for the life of me, I seriously couldn't feel any 'plate' in the outsole so matter how I twisted, prodded and pulled the shoe. They did say thin, Nick!

But I guess whatever thin diffusion plate they had in there served its purpose well cos I hardly felt any prodding or pokes under my feet throughout the run and climb. In fact, it rained the night before and the route was pretty slick but I was totally IMPRESSED with the grip the Resagrip outsole provided me and the wife all the way to the summit of Broga. There was hardly any slippage no matter how slick and slippery the route was which gave me a lot more confidence to go up and down much faster without the worry of slipping and falling off the hill!

The outsole is fitted with the same GOimpulse sensors found in all the GOseries range of shoes though it doesn't have any specific pods at strategic points like the rest but like I said above, the traction and grip is still simply phenomenal!

The upper fabric is made of synthetic and uses the Skechers GOdri hydrophobic mesh technology to keep your feet well shielded from the harsh elements of trail running. I was a little worried that it was going to be a little hot during the run, since this is basically the same material found on the wife's GOrun all weather shoe and that shoe got a little hot during runs so I was pleasantly surprised that it was the exact opposite. I didn't even feel or notice any heat build up during the hike up Broga hill. It did a good job of keeping the feet dry, at least on the insides anyway.

The upper is also a little stretchy and provides a very supportive sock like fit eliminating the need for socks. But I wasn't about to test that theory out and I'm prone to blisters when running sockless so I had on a very thin pair of Adidas Climacool sock to mimic running sockless :D But I doubt I would have developed blisters though cos the insides were totally seamless and really felt like a sock. For those who like running trails sockless, this would be ideal for you.

The heel sports a supportive brace acting as a heel stabilizer yet is flexible enough for the foot to move as naturally as possible. Even though it feels a little stiff when you touch it but once it's on your feet and your're running, you don't feel them at all. The Skechers GOtrail is a shoe designed to promote midfoot strike and you'd be hard pressed to actually heel strike in them, unless of course you really do enjoy pain.

The lacing is something Skechers calls the Quick Lacing System though in my humble opinion, it wasn't as quick as I thought it would be though it's a non issue. The laces were not the rounded kind like the GObionic and not flat like the GOrun series, they were somewhere in between. They stayed put nicely through the run and I didn't even double knot them so that's a pretty good plus point. 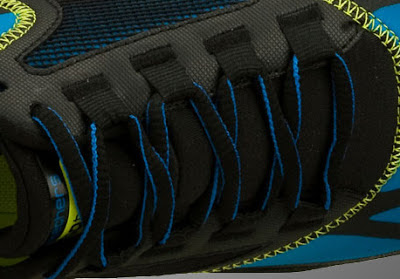 Is this a good trail shoe? As a layman who's never done any trails or hiking, I would say, yes. I came away impressed though I don't have a bench mark to compare this shoe with. From the moment I put it on, it felt comfortable and took away my totally skewered impression that all trails shoes were bulky, thick and stiff! The Skechers GOtrail was as light on my feet as the GObionic or even the GOrun Ride and yet, it was tough and durable enough to protect my feet from the harsh (at least I though it was) elements of Broga hill. I would definitely recommend this shoe as THE trail shoe that you must buy if you're into trail running and that sort of thing.

Speaking of Broga hill, I must say that my first foray into trail and hiking has left me wanting to experience more. I never thought it could be such fun and having fun is really the most important aspect in whatever we do, right?

After downloading the directions to Broga in my cell the night before, we woke up bright and early and took the nearly one hour drive to the hill. The drive was uneventful, with the GPS doing its job well and except for one small missed turn on my part, we arrived there while it was still dark, which was what we planned for.

The place was already full with cars parked at the entrance of the estate called 'Ladang Broga' which was the start of the trek up. We started our journey slowly as we were unfamiliar with  the route and it was slippery as well. It was a needless worry cos the GOtrail more than lived up to its job of keeping our feet firmly planted to the muddy ground. 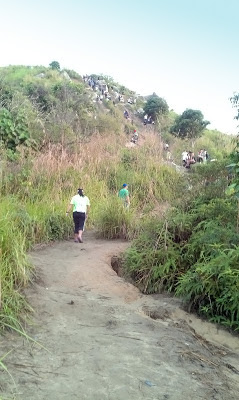 Let me tell you something. If you thought having to trek up 1.7km is a piece of cake, then you're absolutely wrong! The initial climb was decent enough. I was enthusiastic and excited, bounding up with the fire of a young man. Though it was steep and tough, I was feeling fine when we reach the halfway point. Then I saw the rest of the route and that was when I asked myself just what the heck was I doing here? 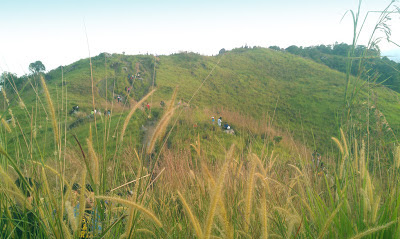 The sun was already peeking out and there were loads of people there heading up and down, taking pictures and whatnot's but the route ahead would see me hugging on to trees, grabbing boulders and trying to find footholds just to traverse its steep incline to the top. I'm afraid of heights so it was going to be tough, especially when you look down and see a huge, long drop below you!

The wife was much braver than me and started tackling the inclines with gusto which had me no choice but to tag along to the top. But after seeing her tackle the huge boulders like Spider Woman, my confidence improved and I happily climbed, hugged, clung to every rock and tree and after about an hour or so, we finally reached the summit which was only 400 meters high but damn, it sure felt like 4,000 meters!

It was a good workout for a totally different set of muscles. The climb up was tough on the calves and the trek down was tougher on the knees which was made worse with me taking a brisk run back down when the terrain permitted, that is.

It took us exactly two hours to cover a total of 3.5km and while it might not seem like much, it was actually tough going. Overall, I enjoyed it thoroughly and am now looking forward to going for some 'real' trail runs. After all, I've already got the perfect shoes for it :D 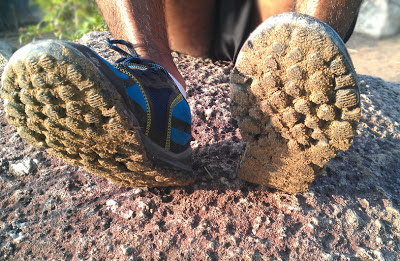 While I'm glad to know there are places like Broga hill to cater for some great outdoor activities, I wish people would take their trash along with them after they leave. The place was littered with empty drink bottles and discarded Styrofoam packing, especially at the halfway point and the summit. Even the rocks and boulders were not spared with graffiti adorning its surface ... siggghhh ... 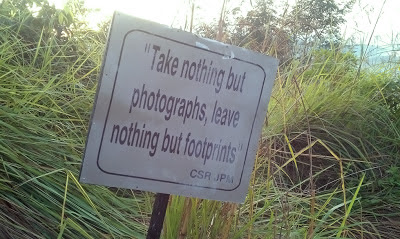 And then there are those who go up and once they're there, they light up their cigarettes and pollute the beautiful fresh air. Seriously people, we're out there for some fresh air and not inhale your second hand cancer causing smoke! Other than that, I enjoyed myself thoroughly and even made a friend with this dog I dubbed 'Broggy' who scaled all the way up to the summit with everyone else. I hope he got home safely though.