Road running and trail running are two entirely different disciplines altogether. Today marked the day I ran my first ever trail run race, the Deuter Trail Fun Run 2013 and though the event stated it was basically a fun run, there was nothing fun about it when you had to traverse one steep zigzag like incline after another along a narrow trail route. But I did enjoy the immense experience I managed to accumulate out of that short, tough 6.2km under-distanced route.

I almost had to give this event a miss initially since it fell on the 5th of May, the GE-13 date but the organizers decided to postpone the event to a week later which was good cos I was kinda looking forward to running this. I've been running a couple of trail sessions with the GCAM group led by Yvonne and have been taking a little bit more interest in trail running so when the chance to sign up for a trail race came along, I didn't hesitate. This would be a good chance to see if those training sessions bore fruit. 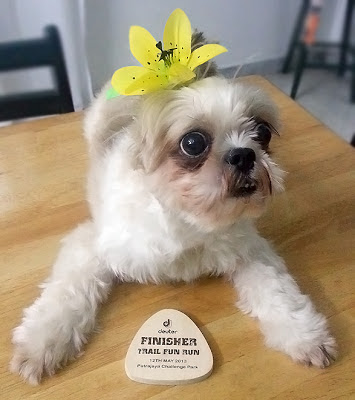 Both Choon Yuen and Yvonne also signed up for the run and we met up bright and early around 7am at the Putrajaya Challenge Park, the location of the event. After passing them their race kits, I was moaning about having to wake up so early just to run a 7km race, you know la, the usual must have complaints before a race ... LOL!

The place was already packed with runners. This was my first trail race and even though it was still a run event, the atmosphere somehow felt different to me. I felt intimidated by all the other runners. They all looked like (and they actually were) professional trail runners which had me questioning my decision to participate.

We had about an hour to spare before race start so we wandered around for a bit. The three of us initially planned to start the run together but that plan was scuttled when they decided to stagger the start into two waves, the men's would be flagged off first, followed by the women's and junior categories.

Come to think of it, it was a blessing of sorts cos Yvonne would have just left both Choon Yuen and me to eat trail dust if we had all started together ... hahaha! At least this way, we could try to keep in front of her and pretend we were faster, at least until she zoomed past us.

We were ushered into the start pen about 20 minutes prior to race start and given a girly, Hawaiian like flower for our wrist as a marker of some sorts that we had to wear throughout the run. There went whatever 'machoness' I tried to portray ... LOL!

At sharp 8am, the gun went off and we were off and running. The start was a short downhill stretch and then it was basically an incline all the way. The first 1.5km or so was on the roads before we hit the actual trails. I was too cooled down by then and had some difficulty adjusting to the initial start. The uphill stretch didn't help either. The only positive point was we were running on the roads and I took every bit of opportunity to get some good splits cos I knew the trails proper would see much slower split times.

Choon Yuen was doing pretty well and was leading me on during the first half of the trail section. The trails were pretty narrow and most times we had to run along single file, making increases in speed a little too difficult. But there were opportunities to overtake and I took them as much as I could. The rest of the times saw me constantly repeating the words, 'coming through, thank you' over and over again.

The trails were really undulating with steep up and down stretches that had me really being cautious with my footing, after all I am in the midst of marathon training and wasn't looking to twist or injure my feet unnecessarily. Trail running really isn't easy, especially when it's a race. I was gasping for breath and eventually just resorted to walking up the really steep sections and running on the flats and downhills.

We came to the one and only water station right where they said it would be, at the 3.5km mark and grabbed a bottle and took it  along with me. Not that I had a choice cos they were only giving out bottles which was a waste really cos lots of people just took a sip or two and threw the balance away. Isotonics would have been good too but sadly there was none.

Around the 4km mark, I was shoved aside by two of the junior runners going at blistering speeds. I was a little annoyed by the shove and push they gave me as they came through. I know you guys are fighting for the podium but a little warning about coming through would have sufficed cos I would definitely have moved out of your way if I knew you were coming through.

The rest of the run was pretty much standard with the route mostly flattening out and going downhill till the finish. Just as I reach the end of the trail section around the 6k mark and saw the final downhill stretch to the finish I was ecstatic but my elation turned to horror when the marshals diverted me to the final 'obstacle' course of six (I think) man-made almost vertical humps that we had to traverse before the home stretch.

The loud 'OH MY GOD!' shout had the three marshals there bursting out in laughter, probably sadistically happy that I was going to have to suffer a little while longer before finishing. I was glad to see the last hump and sprinted all the way back to the finish which was about 200 meters or so away. Crossed the finish in a time of 45 minutes for my first ever trail race.

Picked up my medal and waited at the finish to get shots of Choon Yuen and Yvonne crossing the finish. Though I managed to get shots of Yvonne, strangely enough the shot of Choon Yuen crossing the finish somehow disappeared from my phone. The second time something like this happened with the first being the missing image of me and Kathrine Switzer that the wife took during the MWM. Sorry CY, I know you posed a great finish shot.

A little while later, Yvonne came cruising in to a 3rd place podium finish. We all headed back to the car park area to freshen up, changed and then headed back to the start for Yvonne to collect her prize and also the lucky draw thingy before finally heading home for the day.

Overall I was pretty satisfied with the entire run. Though a short trail event, I gained a lot out of it. The experienced gained will be of good use for any future trail runs I decide to participate in. A lot more 'learning' is needed but at least now I know what it feels like to run at race pace (for me anyway) during a trail event and I guess things can only improve from this point on.

The event proper was pretty decently organized though a little more sponsored drinks, like Milo or 100 plus after the race end would have been nice. I'm not being ungrateful, the water was alright but something really cool and chilly would have been awesome. Other than, it was nicely organized for a small trail event though the 'obstacle' course was a little suspect to me. I hope they have another edition next year cos I'll be the first to sign up :D

Before I end, I must squeeze in a word or two about the Skechers GOtrail shoe that I used for the race. I've used the GOtrail quite a lot already for all those FRIM sessions but this was the first time I actually used it for a race. I must say the shoe performed really well at the increased speeds with grip that was simply phenomenal even on the sometimes loose surface of sand and stones. Never for once was I worried that I would lose my footing even on the downhill sections.

It dug in really well for the climbs and though I sometimes felt the rocks and stones under my feet, the protection it offered was adequate. The only thing the shoe couldn't help was the jarring impact of my foot landing. By lacing the shoe tighter this time round, I managed to keep the sand and stones out of my shoe. We all know how annoying that one tiny pebble inside the shoe can be. Right now, aside from waiting for the Skechers GOrun Speed, I can hardly wait till the Skechers GObionic Trail hits our shores so I can do more trail running.

But for now it's back to my marathon training plans again.