I've been waiting for the Skechers GOrun Speed to come to our shores for quite a while now. I've been trial testing various other Skechers shoes but have always somehow been intrigued by the GOrun Speed since I first laid eyes on an image of it. Of course the fact that Meb, one of my favourite marathoners endorses and runs in the shoe is a big plus point. 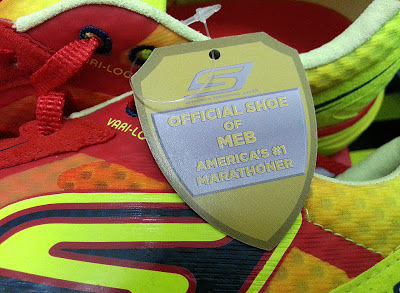 So, you can imagine my utter delight when Skechers Malaysia told me the shoe was ready for pick up. I immediately made plans to head over and collect the shoes. Jamie had the same thoughts too cos he was there and already trying out shoe sizes when I arrived. The first thing that caught my eye was the bright bold colors of the shoe. The words,'speed, fast, light' were instantly shouting out to me.

Officially named the Skechers GOrun Speed but is also referred to as the GOmeb or the GOrace is the official shoe for Meb Keflezighi, a 2004 Olympic Silver medalist and 4th placed finisher in the 2012 London Olympics. Meb himself worked closely with the Skechers design team to make a shoe that fit his exact preferences to run a marathon in. In fact, the Skechers GOrun Speed (which I shall call the GRS from now) is the exact same shoe that Meb ran in during the London Olympics.

Of course, I couldn't wait to run in them and though it was my rest day and I came home really late from work of an extremely busy work day, I took them out for a short late night test run immediately. I honestly didn't know what to expect from the shoe. I knew from some online research that the shoe was more of a traditional racing flat and that it was touted to be built firmer than the usual Skechers offerings.

I must say I came away very impressed with the shoe after that first run. If you've run in a GOrun before then let me say that this shoe is an entirely different build and class from the GOrun or even the GOrun 2 (GR2). True to what I've read, the GRS has a firmer and stiffer sole. The first run in them saw me doing a blistering (by my lowly standards anyway) pace that left my lungs way behind!

With its low and narrow profile, the shoe fits snugly to the foot. At first I thought the narrower fit was going to be a problem but after two runs in them so far (a 4k and a 20k), I like how it latches on to the feet nicely with hardly any slippage though those with wider feet might find it a little too snug. I did have to size it up by half a size from my normal size 8 though.

The upper consists of a nearly weightless synthetic fabric mesh which is different compared to the GR2's and it a lot more breathable. The holes in the mesh fabric seems a lot bigger than the GR2. It's easily the most breathable shoe of the entire Skechers GOseries of shoes. No hotspots or blistering were evident during my 20k run with them.

The interior is lined with a microfiber lining to give it a comfortable fit and feel though I can't verify that cos I don't run sockless. The laces are of the flat ribbon like kind. Maybe it was the way I tied the laces but they did come undone twice during my run. Looks like I'm going to have to double knot them from now on. The insole is glued on and non-removable which will probably solve the issue of it slipping that was evident in some of the GR2's that I've read in some reviews.

What I really like about the upper is the firm and snug heel area. It has just the right amount of hold that you won't find your heel trying to sneak its way out of the shoe. In fact, with the narrow cut and snug sock like fit of the shoe along with the heel, I hardly felt the shoe on my feet during my run except at times when I slowed down in them. I'll get to that in the next paragraph.

The midsole of the GRS is where this shoe differs from the rest of the GOrun family. The GRS features a carbon fibre stability plate in the midfoot area that promotes a more supportive feel. That's where the huge difference lies. The GRS has a midsole that is a lot firmer and stiffer (yet responsive) than the GOrun 2. The firmness of the sole while great when you're running at an increased pace is not so good when you're running slower. It can be kinda uncomfortable and that's when you'll start 'feeling' the shoe. The shoe is built for racing anyway so I guess it's designed to run fast in.

The firmness of the shoe does have its benefits. I thought my feet felt a lot less tired especialy in the arch area as the miles kept going up. I'll see if that observation continues in the next couple of long runs I do in the coming weeks. I also thought the heel of the GOrun Speed felt a lot firmer than the other range of GOseries. Another  difference of the GRS is the lack of the midfoot bump that was very pronounced in the original and still plays a small part in the GR2.

The slight rocker feel of the shoe still exists seeing as how the midfoot is 1.5mm thicker than the heel, with the dimensions ranging from 14mm in the forefoot, 19.5mm in the midfoot and 18mm for the heel, giving it a 4mm heel to toe offset. The rocker feel is really negligible and imperceptible to the eye though. The shoe feels more flat than anything else. The shoe weighs in at 7.5 oz. based on the men's size 9. For a narrow shoe, the toe box was surprisingly wide enough for me. But those with wider feet might find it a tad too uncomfortable.

The outsole maintains the traditional pattern of rubber lugs or to be technically correct, the GOimpulse sensors found on all the GOrun series. The circular pods this time around are spaced out much further apart keeping pebbles and debris from getting stuck between them which is something I really appreciate. Finding a small pebble stuck between the lugs while running can be pretty annoying. I can't vouch for the durability of the propriety Resalyte™ outsole with its memory retention compound yet until I put in a lot more mileage but based on the previous models, I'd say they're good for at least a minimum of 400-500k based on my usage. If you only use it specifically for races, it might last even longer but don't hold me to that.

In terms of shoe performance and in the short time I've spent running in them I'd say they do what a race shoe would do. I was pleasantly surprised with the lack of leg fatigue after increasing the pace way above my planned marathon pace during the second half of the GCAM training session on Saturday which I hope wasn't just a flash in the pan thing. What really struck me about the shoe was that I hardly took notice of it and that to me is the sign of a good race shoe, except of course when the laces came undone.

Like I said earlier, the shoe is simply fast and clearly built for speed. This isn't an everyday shoe you would use for training though and it also isn't really a shoe everyone could just easily jump into and be right at home with. I'd recommend using them more for races, even then, try them out before taking my word for it. I'm not so sure how they'll hold out for a long drawn out marathon cos I don't think I could sustain a pace that requires the speed these shoes work best at but for shorter, fast races, these would be the ideal to get some PB's in.

That said and done though, I'm loving the shoe and it would make an excellent choice of shoe if you're looking for a traditional styled racing flat with a firm yet extremely responsive ride. The only predicament I have now is having to choose the GOrun Speed over the GObionic as my SCKLM marathon race shoe. I initially planed to go with the GObionic but now I'm not so sure. I'll give it until the next 30k LSD in June before I make a firm decision on my race shoe for the SCKLM.