The Salomon Jamboree Trail Run was initially a race I wasn't supposed to sign up for. But the wife, knowing my desire of wanting to dwell into the world of ultra and trail running decided to so graciously give up her NTV7 race which she signed up for and let me take part in this. I have only one word to say to her, 'honey you're the bestest!' Ok, maybe that was a little more than one word la.

Anyways, I was looking forward to the race. The gang from the GCAM training group was also taking part and at least I'd have familiar faces running alongside. After picking CY and Kew, we met up with the rest of the gang and convoyed our way towards Kuala Selangor, the race location.

The race was initially supposed to be at a different race location and was later moved to Kuala Selangor Munical Council premises for some reason or rather with the distance being increased from 7km to 12km. I was glad that they increased the distance of the race.

A couple days or so before the event though, Yvonne gave me and Choon Yuen a heads up that the route was more road than trail with a 30:70 ratio or something along those lines. This might not mean much to some but it had me deliberating on my shoe choice, trail or road shoe? With only 4 plus kilometers on the trails and the rest being on the roads, I decided to bring along both trail and road shoe and make a decision at the location itself.

In the end, seeing as how I can run faster on the roads than I can in trails, the Skechers GObionic was my choice of rubbers. With the trails coming at the beginning of the race, I strategized that I would run the trails slower as a warm up and once we hit the roads, I'd put the pedal to the metal. At least that was the plan.

At the blare of the horn, Piew and me took off at an easy stride while Khay Ann decided to hit his turbo boost button and disappeared instantly. He's just fast! Khay Ann was fourth by the way. The first three kilometers or so was basically road with a little dirt trail and my pace was a little too fast. Both Piew and me decided to slow down a little to conserve some energy for the trail part of the race and also brace for that dreaded stair section we knew was out to get us.

The run was mostly incident free and once we hit the trails, which wasn't really a trail mind you, more like off-road, I slowed down a little more (since I was in road shoes) and mostly kept to the grassy sections as much as I could. Thankfully, the terrain was pretty flat and even, so it didn't really pose too much of a problem and I experimented with a slight increase in pace and found it bearable.

Then we came to a fork in the road and just like everyone else, we followed the person in front of us, happily running along. A kilometer or so down the road, I saw the front runners heading back. I found it odd that we would have to do a u-turn and head back as the route was really small and there would be too many people running too and fro at the same time.

While I was initially a little annoyed at the thought that I'd have to trek back another two kilometers to head back to the proper route, I was more sympathetic towards the front runners who were fighting for the podium. They'd have to work extra hard to keep their placing cos some of the back runners would now be in front of them. I think some potential podiumers lost some placings cos of this boo boo.

After composing myself and focusing back on my race, I slowly picked up the pace again and headed off in the proper direction. I lost Piew around the 6-7k mark and was basically on my own. Once we left the off-road sections, I took it slow for the next 200 meter to negotiate that blasted 80 meters or so of stairs and once at the top, I stepped up the pace all the way back to the finish.

I had already made a conscious decision not to officially cross the finish line as a sign of respect to the runners behind me cos I'm very sure I gained a lot of position upfront after doubling back earlier. It wouldn't be fair to the rest. I walked around the finish chute and picked up my free cap for the first 200 runners (which by the way was left over stock from the 2010 event). Ok, I shouldn't have accepted the free cap but heck, I did after all run and suffer the same as everyone else too.

After grabbing a chilled bottle of water, I headed to pick up my free breakfast, goody bag and medal and waited for the rest who started to slowly turn up one by one. Once everyone was done, we headed back to the car to get changed and cleaned up and that was when I found out that they ran out of goody bags and breakfast for the runners! Judging by the comments on Facebook, some were even missing out on the medals, though I'm not too sure of this.

While I don't run for goody bags and medals, I thought it was unfair on the part of the organizers to be so ill prepared as to not have enough of the items they promised the runners would get and they did say everyone would get a medal, goody bag and breakfast. I felt sorry for the late comers cos they all drove miles and miles for this event only to leave with a bitter taste in their mouths.

I was lucky, I came in early and had everything so no complains from me aside for the lack of marshals or signage which led everyone astray at the 4km mark. Thinking back though, at least it did make the race longer :D I'd gladly welcome an over-distanced race to an under-distanced one any day! At the end of the day, I did have a good race and came in with a time of 1:04 covering a total of 12km. I'm happy with that.

I'm not going to comment much about the race organizers (even though they did delete my entire comment from their FB the day before) cos overall I thought they didn't do too bad. Water stations were where they stated it would be, traffic was well managed and the spray of water just before the finish by the fire department was simply awesome, they could do with improvements in other areas. I'll take this as a lesson to find out more about who the race organizers are next time before blindly jumping into signing up for races. The medal though was simply beautiful in quality. I have to say it was one of the better looking medals I received in a while. 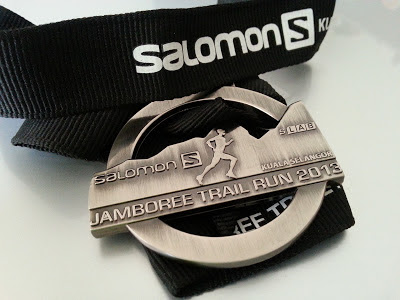 That said, the GCAM group provided the laughter with their crazy antics as always with special mention going out to Foo, our very own resident GCAM stand up comic providing the bulk of the entertainment! The month of August is going to be a barren month, race wise and hopefully I can find at least one race of 21km distance or more. For now though, the training continues.