The Reebok ONE Challenge : Simulation Run

About a month or so back, Anand or better known to his fans as the Orange man invited me to join him for the Reebok ONE Challenge simulation run. To be honest, my initial thoughts were to decline cos I'm not really a fan of urban challenges. Give me a good old running only event and I'd be more than happy to take part.

But the Orange man being a good friend and seeing as how this would also be only his third longest distance run, I agreed to join him as his pacer and keep him motivated throughout the run. We all know how mentally challenging it can sometimes be to run alone. Of course, if he had known that I was fired by the wife as her pacer just before the Tanggathon run, he would have rescinded the invite ... LOL! 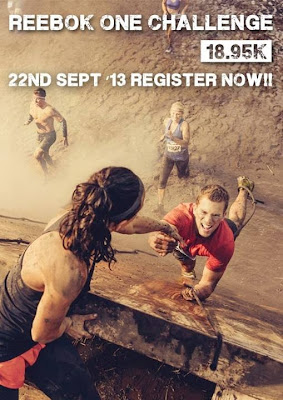 The Reebok ONE Challenge, which will be held in Putrajaya on the 22nd of September 2013 is an urban challenge event that comprises a total of 18.95km of running with 9 challenging obstacles thrown in along the run route. I'm not going to spoil the suspense and fun by revealing all the challenges but there will be the haversack challenge, negotiating 'the anthills', tackling the trails, some climbing and five more tough challenges waiting to test your resolve.

You've got three attempts to complete each challenge failing which, the 'drill sergeants' on hand will inflict punishment in the form of burpees before moving on to the next challenge. Of course, if you even fail to complete the punishment, then you've got to hand in your bib and hang your head down in shame ... just kidding.

The entire event would have you running for an initial 9km or so before hitting the challenges which is about 5km and finally heading back to the finish taking up the last 4km or so. The actual and accurate breakdown of the distances will be confirmed by the organizers later.

So there I was bright and early this morning in Putrajaya to meet up with the Orange man for the simulation. I was a little surprised to see the amount of people there at that early in the morning just to support two runners. There was even a camera vehicle and I started feeling totally self conscious. Is my hair just right? Is my belly too pillowy? Is my butt too flat? ... hahaha!

We started the simulation sharp 6.30am which was the actual flag off time come race day. The Orange man was the star of the show with a head mounted camera to document the entire simulation. The camera/water vehicle would be following us from behind and we had a lead car, a motorbike and two police outriders to clear the way for us.

It made me feel like an elite runner. I mean, how many people can boast of having an entire support crew, camera car and police escorts just to run a simulation? Imagine having cars stopped just so you can run past. Completely awesome! But the good folks of Putrajaya deserve a big thank you for waiting patiently for two turtles to pass them at every junction.

The run took us the opposite direction from the usual Palace of Justice flag offs. Instead of heading towards PICC, we headed towards the mosque, somewhat the reverse of the Men's Health 2011 route. The first half of the run was pretty much standard. We both kept to an easy pace. The Orange man also kept reminding me I was going too fast at times (that's exactly why the wife fired me as her pacer ... LOL!). The route was basically flat with some inclines that are pretty manageable.

Taman Cabaran marks the start of the challenges. While it didn't look as daunting as I imagined it to be but trust me, on race day when you run at race pace for close to 9km and then come up face to face with the obstacles thrown at you, it will definitely be a hell of a lot more challenging. The challenges are spread apart just nicely giving enough room and time for each runner to try to accomplish it before heading for the next one.

The final 4km plus was a little tough cos the challenges do take the wind out of you. The final part of the race takes you all the way back to PICC, then across the Seri Gemilang Bridge and straight back to the Palace of Justice. Most runners would be familiar with this route seeing as how it's used for most of the events there.

The Orange man, I have to say did extremely well. He kept on running, no matter how tired and exhausted he was, especially towards the end of the race. He gamely took on all the challenges and kept on moving till the very end. The determination and resolve that he has can easily put a lot of younger people to shame, myself included (though I'm not that young, la). A big congrats to him for completing the entire simulation even though he was in excruciating pain towards the end. You the man, Anand!

After running this simulation, would I want to take part in an urban challenge event? Yes, I most definitely would. The challenges, while difficult can be fun and makes a change from the usual monotony of road races. If you haven't signed up yet, please visit Hooha Asia, cos the closing date is fast approaching, which is the end of this month. It's a value for money race. The medal looks good, the finisher tee (yes, there is a finisher tee) looks nice and there'll be a scrumptious, delicious and yummy buffet spread at the finish waiting for you. The event is organized by Twenty First Century Sports and we all know they organize some pretty good races.

A big thank you goes to the Orange man, Twenty First Century Sports and Reebok Malaysia for the simulation invite. I had a blast. My running tee and shoe, the Reebok ONE Cushion were so kindly provided by Reebok Malaysia.

The Reebok ONE Cushion that I had on is designed as an everyday trainer which features a three-foam midsole with an ultra soft layer for shock attenuation, a lightweight layer for foot guidance, and a responsive layer to help with forward propulsion. The shoe is a neutral runner with a flat lateral arch area that is geared to promote maximum ground contact. 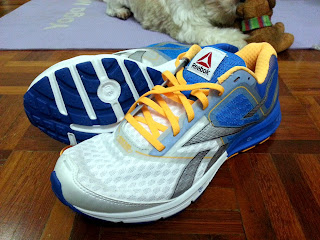 While a pretty decent shoe for most runners but for one who is so used to minimalist or zero drop shoes, I found the shoe to be a little on the thick side for me. The breathability was also an issue and tended to heat up quite a bit, probably due to the added amount of padding around the shoe. I got my shoe half a size bigger than my usual sizing which was a good thing because with foot expansion, even the half size up was a tight squeeze.

With a heel height of 33.1 mm and a forefoot height of 21.1 mm, giving it a 12 mm drop and weighing in at 9.9 oz, the shoe works well for someone who is used to the more traditional type of running shoes and wants something cushiony. As for me, I really like to feel the ground when I run which is why I simply cannot run in anything aside from minimalist or zero drop shoes. The shoes comes in pretty awesome color schemes though which you can see for yourself in the Reebok product page.