With a week to go before my main race of the year, the SCKLM, taking part in an urban adventure challenge was a slightly risky call. Which was why I'm still wondering why I even signed up for the Reebok One Challenge in Putrajaya to begin with. Thankfully I came away unscathed from it, albeit a little exhausted.

The Reebok One Challenge is an urban adventure event which would see participants having to negotiate 9 obstacles in the course of the 18.95 km run. While it might look easy on paper, it was far from it. The obstacles consisted of having to lug a 15kg sandbag, dangling across monkey bars, jumping over barricades, trudging up anthills, slogging up a steep incline, trekking through a trail, running through tyres, climbing a wall and a surprise challenge just before the finish line.

The wife who wasn't running the event decided to come along and support me for the run. Since it was Putrajaya and parking would be more than adequate, we decided to sleep in a little and arrived at the race location about 30 minutes before race start. Aside from the wife, this race was a little lonely with none of the usual GCAM guys and gals, save for Yan Leng, present. No company to chit chat along the way.

Was a little embarrassed before and during the race with people coming up to me and saying, 'hey, aren't you the guy from the simulation video'. Now I know how celebrities must feel. Hey, let me have my perasan moment, ok ... hahaha! The race started out on time and my plan was to take a nice easy run for the first 10k before hitting the challenges. The run simulation I did a month back was a big advantage cos I knew what to expect for the run stage, route wise and I decided that I could risk switching the easy into a speed session so much so that I PB'ed my 10k just before hitting the first challenge.

The run proper was pretty standard until I came to the first challenge, the sandbag. I was greeted by a smiling Zane, who was the drill sergeant for this obstacle who gleefully gave me a sack to lug for 80 meters. This was where the fitness buffs (whom the wife had a field day ogling) would be in their element, running with the sack while I was huffing and puffing and walking as fast I could to the end of the line.

Next up was the monkey bars, just a short run away. I had already planned to take the penalty and do the burpees for this challenge. As I came into the monkey bar area, the Orange man saw me and a hint of evil flickered in his eye. According to the rules, I had to at least attempt the challenge before doing the penalty so I hopped up and with sweaty hands, slipped off. There, that was my attempt, now let me do the darn burpees and be on my way. The Orange man, with glee in his eyes made sure I did my burpees properly even torturing me with an additional one!

Next up after a 300m short run was the barricade, three of them, which I decided to just climb over like a sissy little man instead of jumping over them ... hahaha ... Hey, I have knee issues, ok? Then a 400m run, and up the anthills it was. This was no fun cos immediately after that was the steepest incline that could give Ammah hill a run for her money. I walked up, no sense torturing myself since it was only about 200-300m. Then came the short trail section which I loved though Kew has issues about a trail being an obstacle. It was brutal la, Kew. There were tigers, snakes and whatnots hiding in that 200m trail, you know ... hahaha!

After exiting the trails, the tyre challenge was waiting. Again, I decided to just walk through them for fear of tripping over one and falling flat to the ground. Then came a 400m run to the walls. This was another one of my pre-planned not to do obstacle. Look at the walls, can you blame me? I ran up to the female drill sergeant, and asked if I could just take the penalty. She was a strict one though and responded with a loud resounding,'No! Get up those walls first'. With a reply of 'Ma'am, yes, ma'am' I headed up the wall and failed, naturally and did my burpee penalty.

Finally the challenges were over save for the surprise one at the end. Now I can get back to proper running. But running after this point wasn't easy. I was already exhausted from the challenges and getting into stride again was an effort. I just couldn't get up to the pace of the earlier 10k and decided to keep it easy till the finish which was after all just a mere 4k away. The sun was also peeking out already and made matters a little hot. Thank god for the sponging stations. Yes, we had sponging stations.

The secret obstacle, which was two trucks (the Ford Ranger kind) parked back to back about 200m away from the finish and even though I knew about it before hand still made me mutter, 'What? Got some more, ah?'. But my spirits lifed when I saw the wife there and immediately perked up with confidence. Come on, you gotta look good for the wife, right, especially when she had a camera in her hand ... LOL!

With whatever strength I had remaining, I climbed over the trucks and made the final dash for the finish, gratefully excepted my medal and made my way to find the wife. I crossed the line in a time of 1:46 and was happy with it considering the tough challenge sections. A yummy and sumptuous buffet line was waiting for the runners, something that added a nice touch to the event.

Overall, for a first time event, this was very well organized. Water stations were aplenty, maybe a tad too many, the medical personnel were more than adequate. The volunteers and marshals were very efficient and friendly, always with a smile urging everyone on. The drill sergeants, while having evil, sadistic streaks in them were absolutely encouraging. A big congrats goes out to Reebok Malaysia and Twenty First Century Sports for providing an excellent platform for runners to have a good time. You're going to have a tough time next year topping this :D

Now, with this all over, it's time to taper and get mentally prepared for the SCKLM next week. 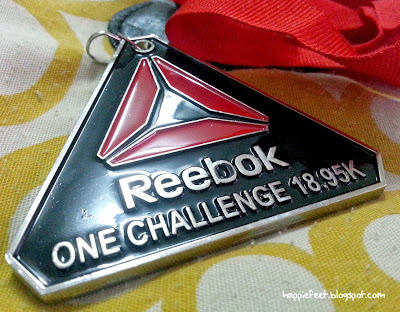