It was perfect weather this morning with the stage being set up for a nice, wet, muddy and dirty Salomon X-trail race in the trails of MAEPS (Malaysia Agro Exposition Park Serdang). And it would have been a nice run too if not for the totally under-distanced race.

The skies opened up around 4.30am with strong winds and heavy raindrops pelting our roof. The wife and me were contemplating whether to go or not but we both agreed that it was still two hours to race start and it would stop by then. I instantly checked the weather updates from the rest of the gang who were reporting the same rains in their area. We're much better than AccuWeather, mind you ... LOL!

This run was a stress free run for me. I didn't have the usual competitive must-run-fast-like-a-jungle-man thoughts this time around. I was just coming back from illness and wasn't at my best yet. My plan was to just take it as a training run. I was more excited for the wife, who was running her first trail race. 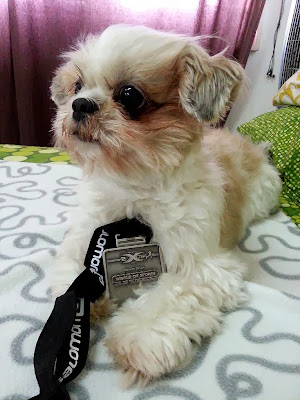 We reached the race location slightly over 6am and saw Jamie walking to the start location. The rains had already stopped by then with a very light diminishing drizzle. Got race prepped and headed to the start area to meet up with Jamie and the rest of the gang. The crowd were slowly filtering in one by one but I think a lot didn't turn up or headed over the many numerous other races in town. It was said that entry was capped at 2,500 slots that were all taken up but judging from what I saw, it didn't reach anywhere near that amount. I could be wrong though.

The men were to be flagged off first. Jamie and me made our way to the back of the start area with the rest of the GC guys abandoning us and heading straight to the front. Obviously their strategy was based on a speed run. I wasn't sure what Jamie's plan was but mine was to go easy. I had on my Skechers GObionic Trail, giving it its first taste of an actual trail race.

The horn blared indicating flag off and off we went, at a snails pace for the first kilometer anyway. The route was a little narrow and since we were way behind, there was a horde of runners to start overtaking. No rush, since it was a 10k trail (or so I thought at that time), conserve the energy and pace for the later stages.

The road stage was short and we hit the trails and the first incline which was pretty steep. Kept to smaller and constant strides and managed to easily tackle that first incline. It was long, steep but doable. The Skechers GObionic Trail worked really well, gripping the terrain with hardly any slippage safe for a loose rock or two. It gave added confidence for me to bolt down the downhill stretches. 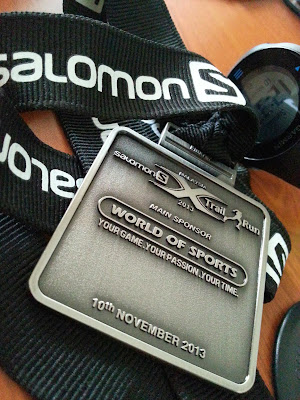 The pace increased on the flat sections and by the time I hit the second incline, the recent bout of illness was beginning to hamper my performance. Stopped at the second water station, took two cups of water, decided to run/walk that section of the incline. Jamie pulled off ahead, still running strong. I knew I wouldn't be able to keep pace with him anymore and decided to just keep him in my sights as an indicator for me to keep going.

By this time, the first male runner was looping back to the finish with breakneck speed down the slopes ahead. That section of the race was tough for me. I couldn't walk too much cos then I would lose sight of Jamie but the inclines were also pretty steep. Heard my name being called out and saw that it was Eugene. Chatted for a bit and got down to the business at hand which was trudging up the blasted hill.

Caught up with Andrew at the top summit and both of us ran down the rest of the way. At the junction of the incline, the women who were flagged off 15 minutes later were already making their way up and my strategy changed to 'make sure no woman overtakes you' mode ... hahaha! By then it was around the 5k or 6k mark and I was getting into a more comfortable pace to face the rest of the 4k left. 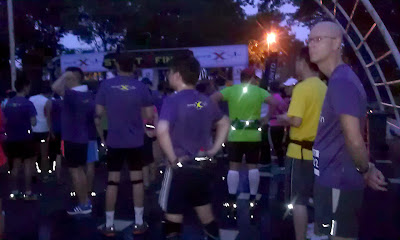 Boy, was I in for a surprise. By then we hit the road and I was a little puzzled cos from a route recce report I read a week or so back, by the time you hit the final tarmac section, it was close to the finish line. I upped the pace and tried to reel in Jamie who was a distance away but still in sight. Sorry Jamie, I used you as bait in the second half of the race today ... LOL!

Then when I heard music blaring and a volunteer told me the finish was just down the road, I thought my Garmin was going bonkers cos it was only showing 7km and the Start/Finish gantry was already in sight. What happened to the 3k? I crossed the line and clocked in at 45 minutes, not great but decent enough for me considering the illness.

Picked up my medal and true enough, after checking with the guys, we all showed similar distances and it was only then I found out that they changed the route at the last minute cos of the rain. I guess I never heard the announcement prior to race start. The reason was for safety cos the route was slippery or something along those lines but personally I would have preferred if they stuck to the actual route, slippery or not cos it would have given me more opportunity to blood the GObionic Trail but I guess safety above all else.

Picked up my goody bag and medal and caught up with the rest of the gang while waiting for the wife. The gang went off in search of breakfast somewhere while I waited for the wife who came in shortly. For her first trail race, I must say she did extremely well considering the terrain she had to go through. Good on you, babe! 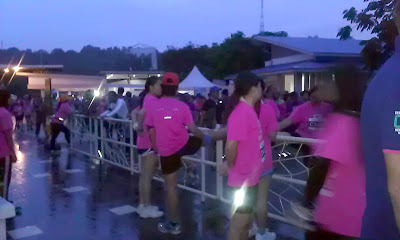 Overall, I'm a little disappointed for the under-distanced race though I know it was done for safety concerns. It was such a beautiful morning to be outdoors and 7k simply doesn't do justice to the weather. Looks like I"ll have to squeeze in another run this evening just to get in the mileage I missed cos of my illness this week.

The Skechers GObionic though, worked way better than its owner simply proving itself in wet trail racing conditions. The grip was exceptional on the slopes and downward stretches. Like I mentioned earlier, hardly any slippage. No pebbles or debris got lodged under the soles and running through mud didn't hinder it in anyway. I'd give it six thumbs up if I had six thumbs to give.