... the first star I see tonight. I wish I may, I wish I might have the wish I wish tonight.

The Starlight Ultra in Penang is just over a month away and I'm having some reservations about it. In all honesty I have no idea why I signed up for it in the first place. Back then it seem like a sensible thing to do, as if signing for an ultra is actually sensible. On hindsight, maybe I was a little too anxious to step foot into the world of ultra running. I deserve a hard wallop on the head!

I'm still taking baby steps in the world of ultra running. Granted I've run a few and survived to tell the tale but let's face it, there's still a long way to go with a lot of room for improvement. I'm a person who firmly believes in the adage of not doing something just because everyone else is doing it. If I do something, I'd put my heart and soul into it and make sure I'm well prepared and ready to do it, sometimes to the point of being a little overly obsessive. I don't do things halfheartedly and certainly not because it's a fun thing to do. At the end of the day, I like seeing the improvements in myself that come out of all this. 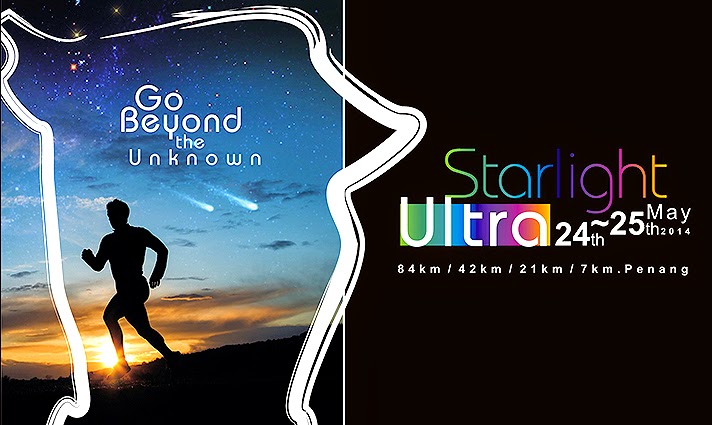 But training for an ultra and a marathon in July (my main time goal race for the year) can be quite a difficult thing to do. Both disciplines advocate different training approaches and that made figuring which one to put my training effort into a little bit of a predicament. Both events are spaced quite near to each other and I'd have to set my training for either one and not for both cos then I would just screw up in both events.

Since the marathon is something I'm still trying to excel at and it's going to cost a lot more to run it, I've angled my training priority towards the 42k. But that doesn't mean I've completely ditched any training for the Starlight Ultra. I've prepared myself with as much training as I think will help me cope and make it through the grueling 84km around the island of Penang with some equally insane people throughout the night.

A couple of runs in the blazing sun for heat familiarization which include six hour runs on my own which was totally mental has been done. Loads of long distance weekend runs have been checked in with the GC training group who are also signed up for Starlight Ultra. Whether I've done enough to see me through the madness, we'll just have to wait and see come morning or afternoon of the 25th May.

The Starlight Ultra clinic that was held yesterday turned out to be a very insightful session. I completely forgot about it until either Julia or Kew (I can't remember who) brought it up. I initially didn't want to attend but was glad I did cos I learned a lot from the experiences shared by the more experienced ultra runners at the clinic. A CP by CP run through of the route was also really helpful in giving some idea of what to expect along the way.

The apprehensions I have aside, I'm looking forward to it cos races for me have been few and far between this year. A lot more time has been put into training for more specific goals. After all, it's not always you get to run around the Pearl of the Orient albeit in the middle of the night. At least I won't be alone in this insanity, I'll have the company of the crazy and jovial GC group with me, though trying to keep up with a few of them might take some doing. No names need to be mentioned cos you know who you are :D