The original Skechers GObionic and me has gone through a love affair of more than a thousand kilometers seeing me through two marathons, achieving a personal best in one of them and countless hours of caressing my feet as we hit the asphalt together. My love for it grew steadily with every step I took in them. 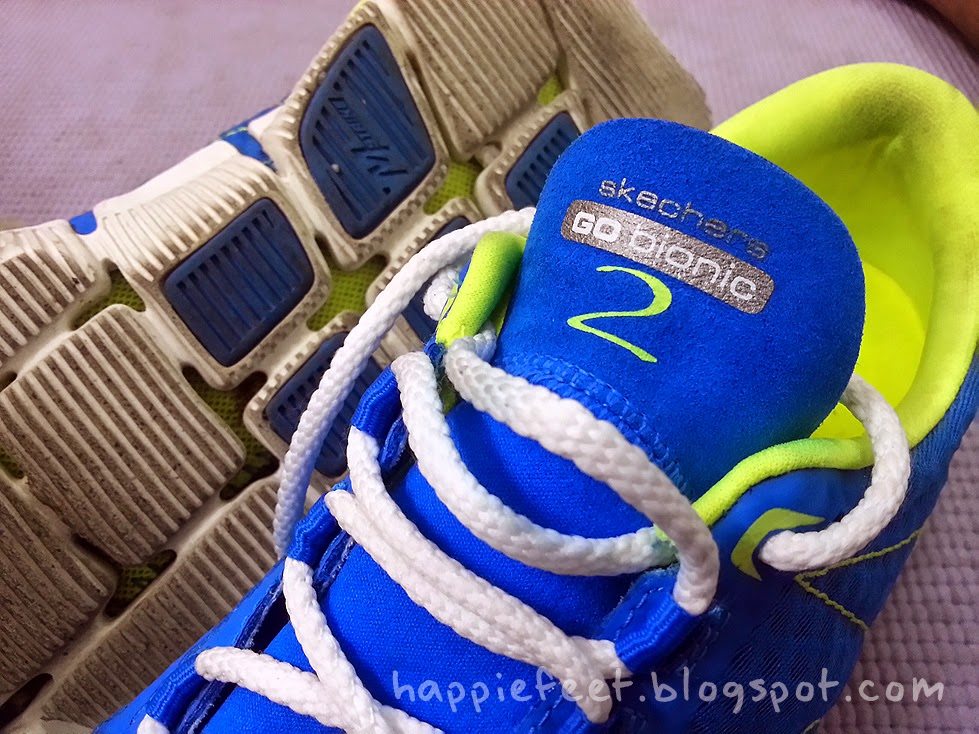 So it was no surprise that I would be looking to carry on that love affair with the Skechers GObionic 2 (GB2). And it was a long time in coming seeing as how the original iteration of the GB was released here way back in September or October of 2012. Since then though, the Bionic series has seen the likes of the GObionic Ride and the GObionic Trail being released, both exceptional shoes in their own right.

Knowing that the GB2 was being developed and seeing pictures of the shoe online only whetted my appetite waiting for it. Finally, after a long wait, I got my hands on the latest iteration of shoe and my love for the shoe was rekindled. Visually, the shoe took my breath away. The blue/yellow colorway that I had for review was simply right up my alley.

The GB2 has seen some pretty positive changes since its inception. The original was a great shoe. This one is even better. The biggest change the GB2 has seen is in the form of a fresh new upper. The GB2 still carries over the same incredibly flexible zero drop outsole as its predecessor though a thin layer of cushion just below the insole has been added to the footbed. 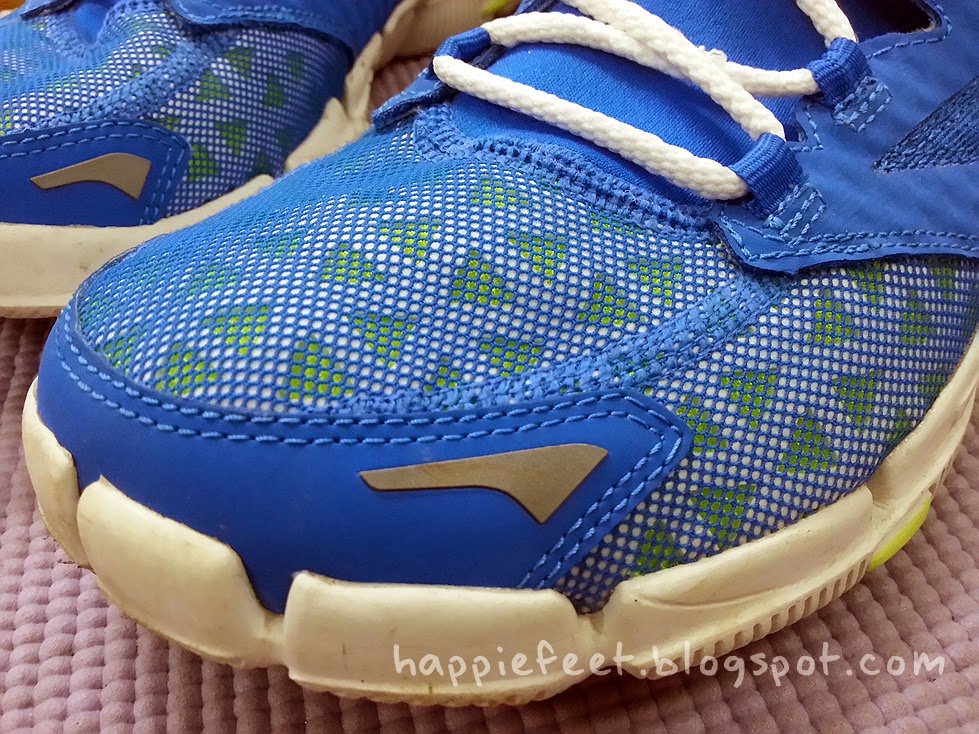 The thin insole found in the original GB has been upgraded with a thicker 4mm drop insole giving it a slightly cushy feel compared to the thinner insole of the original GB. The thicker insole gives the shoe a two in one combo where you can run it in zero drop mode or in a 4mm setup, which is just dandy for those longer runs that need a little more cushioning.

Carrying over the same specs from the original, the outsole is engineered around 18 bio-responsive zones that are fully articulated to move with your foot for that more natural feel. The proprietary Resalyte™ outsole offers a firm ride yet is cushioned enough to absorb impact.

The stiffer plugs found under the shoe remains in the same position though I would have like to see a little more around the forefoot section of the outsole where I find the most wear and tear. The Resalyte™ compound seems to not have changed much and is easily worn, even after a few runs in them. Maybe it's just the way I run. Oh and the flex grooves still has the annoying trait of picking up pebbles or small debris in them. 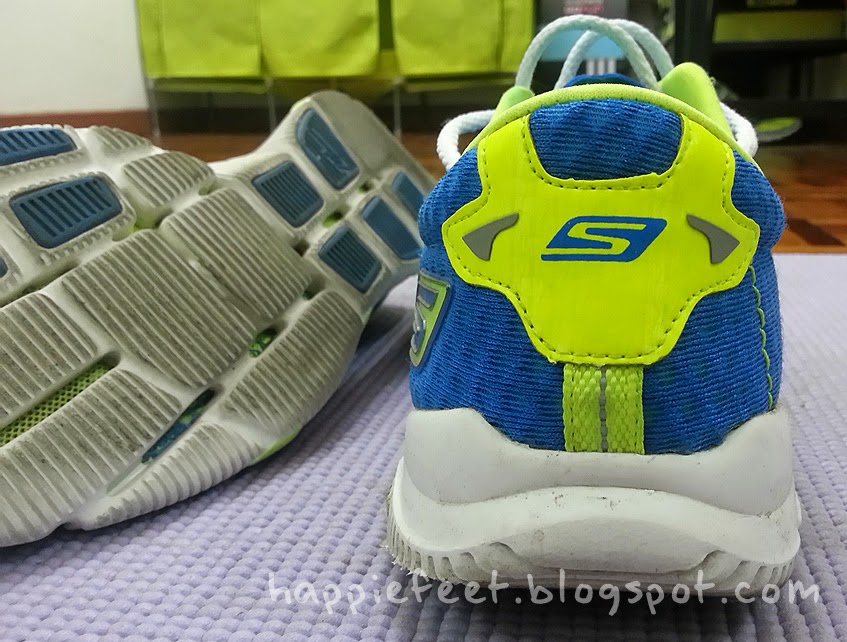 The upper of the GObionic 2 has seen the biggest change. The flexible and breathable power-prene ultra lightweight and synthetic upper that is found on the Skechers GOrun 3 is now also found in the GB2 as well. You get the same stretchable mesh in the front that gives your toes enough room to flex and spread out though the midfoot area seems to have a little less overlays and a much lighter mesh than the GR3. The upper offers a much more plushier feel than the original and fits your foot snugly, a little too snugly in my case that I had to size up from my usual 8's to a size 9. 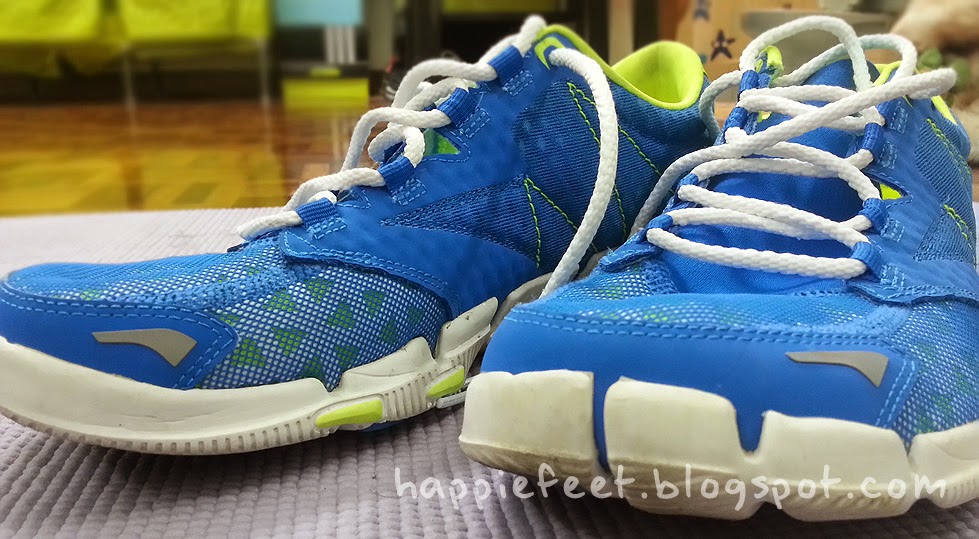 One of the more profound changes I noticed in the GB2 is that the forefoot area seems much more roomier than its predecessor. I put that down to the stretchy new upper fabric. The same lacing system and tongue from the original has been maintained and I had to be a little careful with lacing them as lacing them too tight added some pressure around the top of my foot. Loosening them slightly alleviated the problem. 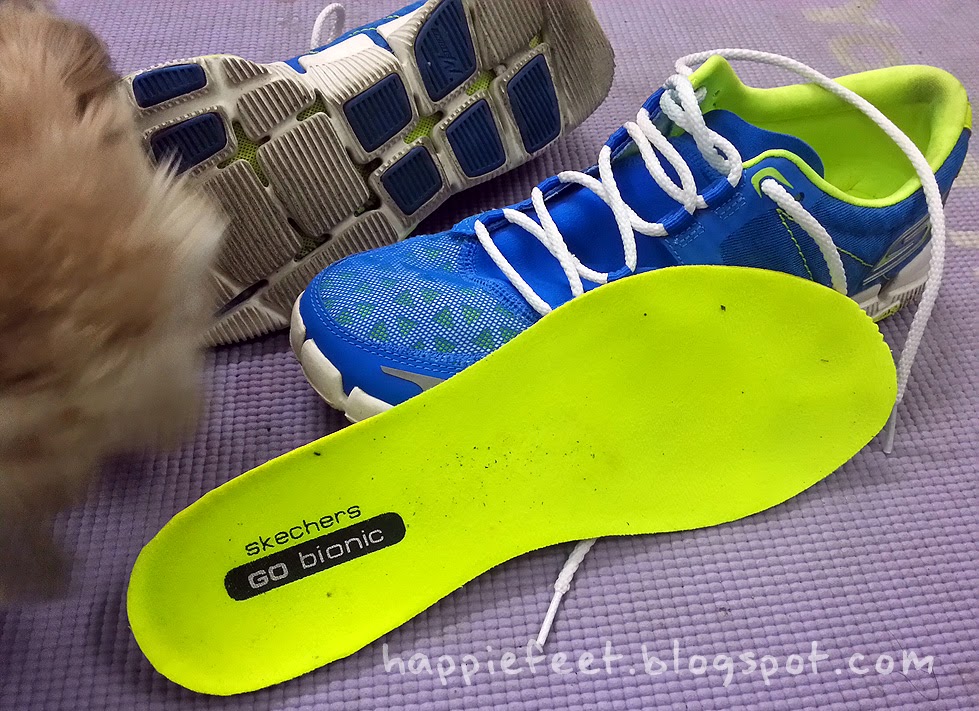 The midfoot area seems to be nice and snug and a layer of brushed fabric adorned to the top of the footbed making running sockless a breeze. That was what the specs said anyway, cos I don't run sockless and can't really verify this. You don't have to worry about smelly feet when running sockless cos the Agion scent protection is there mask your smelly feet.

Weighing in at a tad heavier than the original, the Skechers GObionic 2 weighs a mere 6.5 oz. based on the men's size 9. How they managed to keep the weight the same is beyond me seeing as how the upper looks to add a little more weight to the shoe. In line with all the GOseries, the GB2 is engineered to promote a midfoot strike and with its Custom-Fit insoles enabling you to run in either zero drop or 4mm mode, you kinda get two shoes for the price of one, well kinda anyway :D 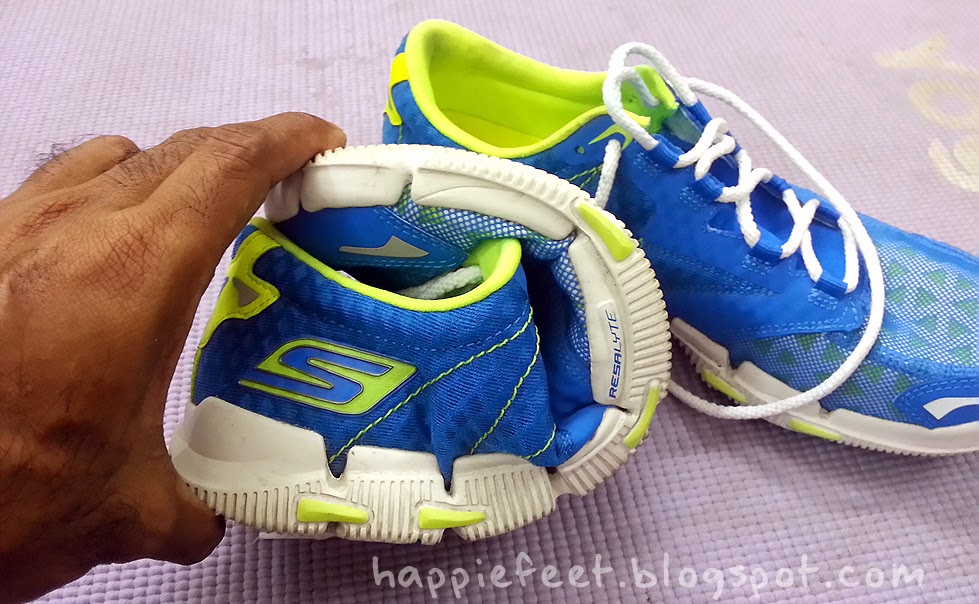 So how does it fare performance wise? It was everything it claimed to be. I've done quite a bit of mileage in them already since I've got the shoe. Morning sessions, wet sessions, evening sessions and even hot blazing noon day sessions and they all came through just fine. Can't say the same about my feet though. I've run the GB2 in both setups, the zero drop as well as 4mm and both came out just peachy. The flexibility is simply phenomenal.

The GB2 was extremely breathable and no hotspots were apparent. The longest I've run in the shoe was a 28km session in the blazing afternoon heat of Putrajaya and the GB2 performed just fine. No heating issues were apparent even with the temps blazing. While my feet are accustomed to running in zero drop mode, I prefer running them in the 4mm setup. They're much more forgiving for the longer runs. The option to size up was also a good call.

The only two peeves I have about the shoe is the fact that the color seems to run and I've had all my socks stained a blue/yellow hue after every run. I've checked with Jamie, a fellow Skechers shoe reviewer and he didn't encounter such issues so I guess it just boils down to my pair. It's probably cos I sweat a lot and my shoes are normally soaked after a run which contributes to the staining. No big deal but it doesn't do my sock any good. 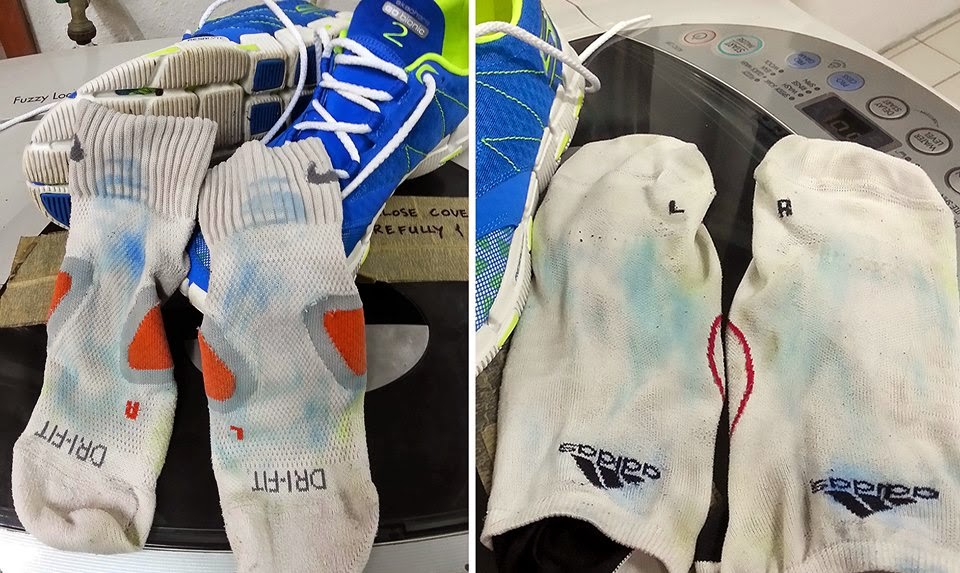 The other peeve is having to pick out small debris and pebbles from between the flex grooves after every run or when you get a huge stone lodge between them and you have to stop to dig it out, ruining your rhythm. It could be a problem during races which has me a little worried cos they just might be the shoe I take along to the Gold Coast Airport Marathon next month. Aside from that, they're simply an excellent shoe and I'm thoroughly enjoying running in them. 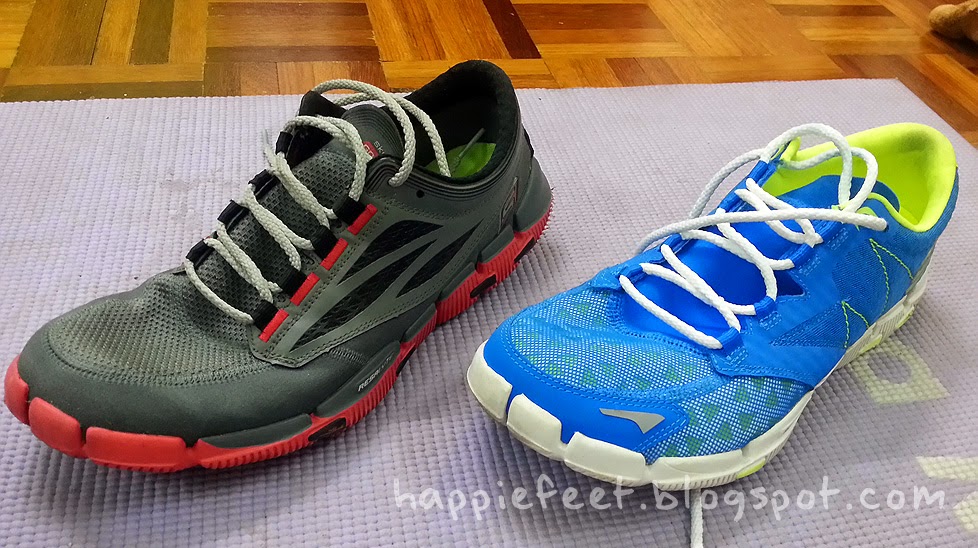 Update: I ran the Gold Coast Airport Marathon in them and I must say they totally outdid my expectations in them.