It was a cold, wet and muddy affair at the Boh Highlands Run 2014 this morning but it was not without fun. The rains that came pouring down just before the race start and remained until the event was over didn't damper the spirits of those present. In fact, everyone reveled in the rains, mud and cool, crispy fresh highlands air.

The wife and me started our journey to Cameron Highlands for the inaugural Boh Highlands Run 2014 at the ungodly hour of 6 am. We took a nice slow and easy drive up to Cameron's with the intention of avoiding the infamous Brinchang 'pasar malam' gridlock that had me fuming with rage a few years back. Back then it was our first visit to Cameron Highlands, also for a run event and we were stuck in the crawl for close to two hours.

We weren't going to have any of that this time round. The drive up was uneventful and pretty much easy. With a stop at one of the highway rest stops earlier for breakfast, we reached Copthorne hotel, our 'home' for the weekend around 11.30am. The traffic was already getting a little congested and we decided to park the car in the hotel car park and explore the place on foot since it was still way too early for checking in.

We weren't short of places to visit seeing as how just a few metres down the road were shops and stalls selling all the usual Cameron Highlands knick knacks and food. We took our time checking out everything, bought a couple of stuff and before we knew it, it was time to check in. Checking in was a breeze since our reservations were made out in advance. 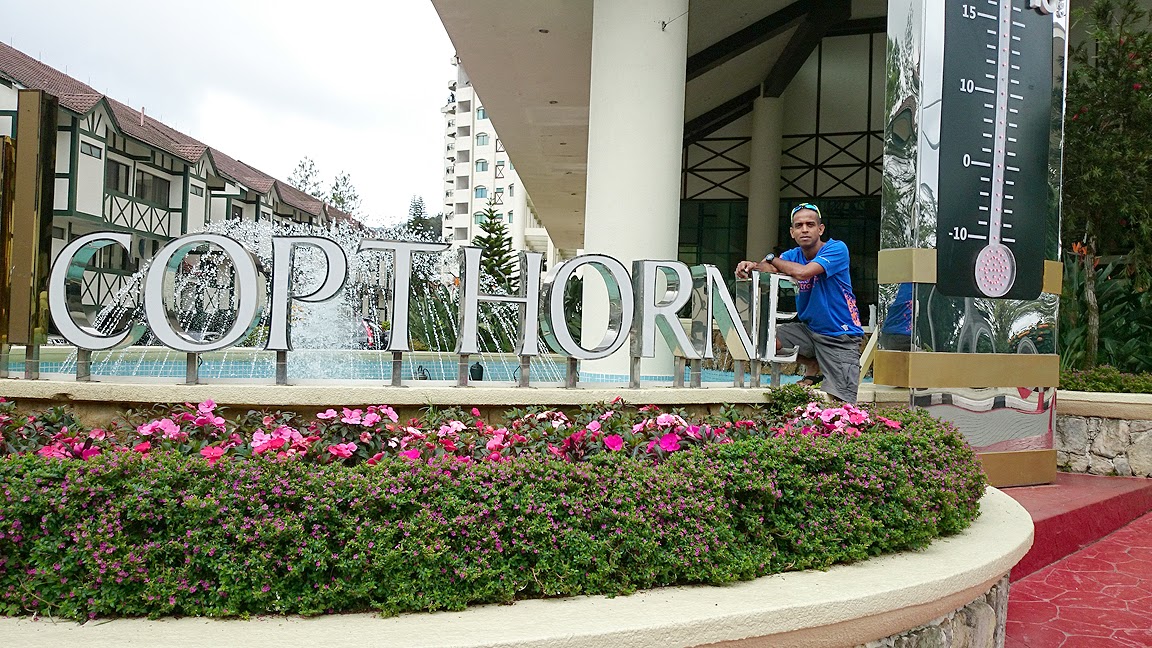 Upon checking into the room, I was already plotting a route in my mind for the wife and me to run later in the evening. The roads were not really safe nor very conducive for running, what with it being narrow and choked with slow moving cars. The next best thing was to make a beeline towards the Boh Tea Centre at Sungai Palas. After a short rest I was already bugging the wife to get ready. My feet were itching to get in some running before dinner. Besides, I really needed the mileage and the sublime weather was simply begging for a run.

The plan to run to the Boh Tea Centre was a sound decision since the route, though a little narrow was devoid of much traffic. The run was scenic with a beautiful view of the tea plantation on our right. The weather was simply cool and reminded me so much of our Gold Coast Airport Marathon excursion. It made me miss the place all over again. Yes, yes, I simply love the Gold Coast! There, I've said it!

Anyways, we reached the race start location and the organizing committee, led by Dominic and the event crew, led by Wan, were still busy setting up the place. Caught up for a bit and then headed up to the Boh Centre before heading back to the hotel. The journey back was a little more difficult, what with the entire route back being uphill but we both got a nice good quad workout. It rained on the way back and that didn't bode well for tomorrow.

After a quick shower, a disappointing dinner at the hotel, it was back to the room to chill and call it an early night since we planned to drive to the centre instead of taking the shuttle bus provided by the organizers and our main concern was getting parking since space was limited.

Up bright and early the next morning, we were out of the hotel and headed to the race start location by 6.00am. The place was already filling up with those who opted to drive on their own. The music was already blaring and the place was starting to get in a party mood. Most of the participants had fancy hats or head gear on since the theme called for a wacky hat. Shereen, from the organizing committee passed me a hat to wear, which of course I was too shy to put on ... LOL!

Then, as per my deductions, the rains came which had everyone scrambling for cover under the tents. I was secretly and sadistically happy but god, was it cold and chilly. The rains didn't let up and for a moment the event looked set to have a delayed start but thankfully Wan, the race director decided to keep to the schedule and off we went. I was a little concerned about the participants cos at least 95% of them were wearing normal road shoes instead of trail shoes and the route was bound to be muddy and slippery.

The start for me was pretty screwy. The thin mountain air and the uphill start had me gasping for breath as early as 600 metres into the run. As expected the route was muddy, water logged at certain points and very slippery. Since I had on my grippy and trusty GObionic Trail, it was all systems go for me and I pounded the muddy paths as fast as my legs would allow.

The route though short and slightly under distanced, at 4.5K or so was by no means a pushover, what with the uneven, muddy and sometimes rocky terrain coupled with its ups and downs. It took some effort at certain points to keep going. But everyone looked like they were having a good time with lots of participants taking advantage of the simply beautiful backdrop of the tea plantation to stop and take selfies.

Overall, safe for the rain which no one can control, the event was pretty well organized for a fun run, if you asked me. The 500 or so participants all looked like they were having a blast in the rain. Their spirits weren't dampened and I had a blast myself. How often do you get to actually run in the rain in a picturesque tea plantation?

There were loads of activities on hand such as the 'BOHfie' competition where runners took selfies at 'BOHfie' spots around the plantation. 20 prizes were set to be won and three people I personally know managed to grab a prize each. Kudos to Max, Evelyn and Marlina for grabbing a hamper each for your 'BOHfies'.

The main objective of the run was to actually create awareness on the importance of environmental conservation. All proceeds from the run registration which amounted to RM25,000.00 were channeled to the Malaysia Nature Society for environmental education projects to be implemented in all the 27 schools in Cameron Highlands.

The wife and me finally made our way back to the hotel, tired but happy and after a bath and a short rest headed for home. This was the least exciting part of the weekend. Before I go, I'd like to say thank you to Boh Plantations for your hospitality and complimentary entry for your event. I had a blast. If you're planning to do this again next year, maybe a longer and even more challenging route this time round? :D