I'm not a person who normally runs with music when I'm outdoors. Most times I'm too focused on my runs and prefer to concentrate on the sound of my breathing and footfalls. The other real reason is simply because with earbuds plugged into my ears I won't be able to hear cars creeping up on me. The roads I run on are normally full of cars heading out to work and lots of drivers these days keep fiddling with their phones in the cars not paying attention to pedestrians, cyclists or runners. That's why my headphones are normally left at home.

Don't get me wrong, I do like running with music at times cos it can take the boredom out of a long run but safety is of paramount importance to me when I'm running outdoors which is why I was absolutely intrigued by the AfterShokz Trekz Titanium (ATT) when I first spotted it two months back. 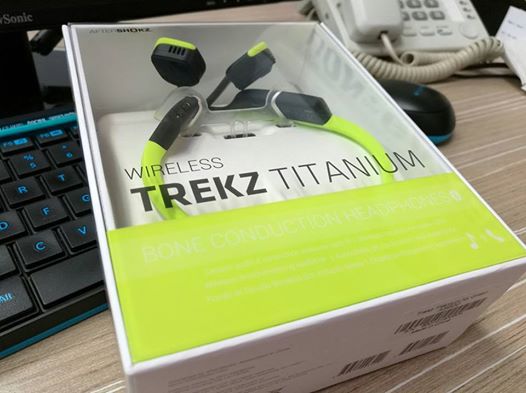 Now here's a new sports headphone relying on bone-conducting technology that lets you listen to music through vibrations generated by the patented transducers that conducts sound directly into your inner ear through your cheekbones! Your ear canals are left unobstructed unlike the conventional earbuds leaving you with an impressive amount of situational awareness on your runs. I was really impressed with the safety aspect of the device.

The Trekz Titanium looks like any other wireless headphones out there. It comes in a nicely packaged box and includes a quick reference guide, a micro USB cable for charging purposes, a pair of silicone FitBands for a better fit, a pair of foam earplugs and a warranty card for online registration. As the name implies, the device is made of flexible titanium that's encased in a silicone sleeve. 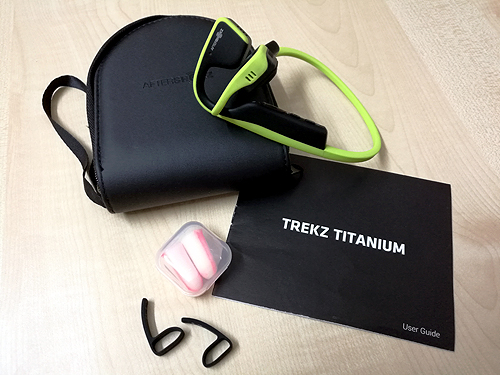 The device itself isn't anything spectacular. You'll find the usual things you'd normally find on a wireless headset where they're supposed to be. On the right side of the unit, you'll find the micro USB charging port under a snug rubber seal. The literature says it'll take 90 minutes for a full charge but the device has some charge when I got it and it took about 40 minutes or so the first time I charged it from my laptop. You'll know it's topped up once the LED changes from red to blue.

Next to the charging port you'll see the volume buttons. The volume up button also doubles as an on/off button and you'll be greeted by a stuttering female voice prompt. The quick reference guide indicates she's named Audrey, I'd have preferred a Rachel but I had no choice in the matter ... LOL! On the left side of the device, there's a button for starting song playback, pausing the device, skipping tracks, and answering calls. Yes, it's also a hands-free device. I'll come to that later. 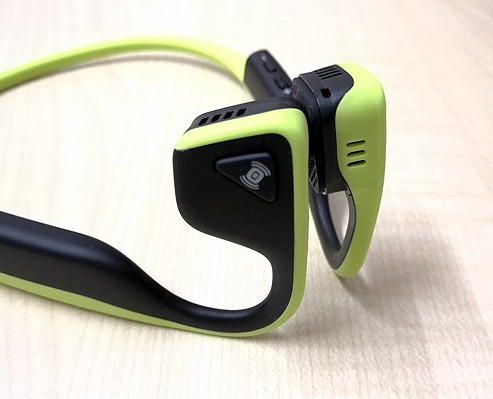 Pairing the device with my smartphone was a breeze, which really surprised me. It took all of 20 seconds to locate my Huawei smartphone and once I selected the Treks Titanium by AfterShokz on my phone's Bluetooth option, I was good to go. It really is that easy! I had to transfer some songs from my laptop to my phone and I immediately headed out for a trial run with it.

I'm not much of a sound person. To me, everything sounds the same. I can't tell the difference between a good bass or a bad bass. But I thought the ATT did provide a decent listening experience. Please bear in mind that the ATT is an open ear concept and some loss of sound quality is expected. That goes without saying. 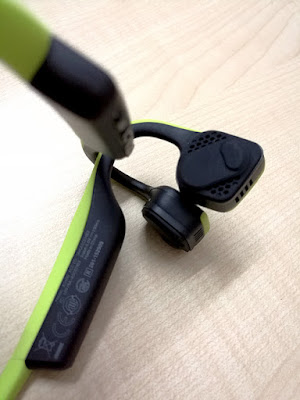 But to a layman like me, I could hardly tell the difference. The music was still clear, I could hear every tune being belted out. The most unique thing is with the music playing, I could hear the traffic around me, the birds chirping, the cats meowing, the aunties calling out to me and even conduct a conversation on the run. Now that impressed me. With my other device, I could hardly hear anything with the earbuds plugged in.

The fit of the AfterShokz Trekz Titanium was surprisingly good. I've always had trouble with the fit of my other wireless device from the earplugs popping out as I start sweating to the unit itself bouncing up and down the back of my head. The ATT sits over the ear and the transducers rests on your cheekbones just outside the front of your ears. The fit of the ATT's band was snug. It wasn't overly tight and hardly had any bounce. Even the transducers stayed in place nicely. I sweat a lot when I run so that was a pleasant surprise. Even with faster paces, they stayed snug. I only had some minor issues fit wise where it was pressing down against the top of my right ear but I put that down to my defective ears! 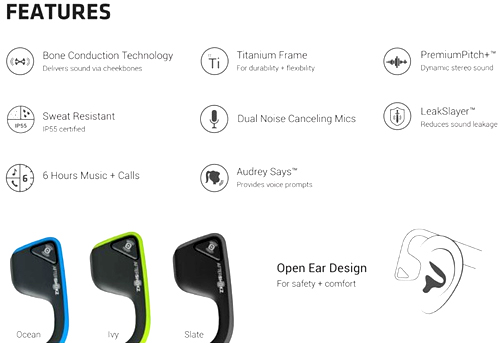 The volume buttons took some getting used to to figure out which was up and which was down. The left side button also took some getting used to as you need to memorize how many presses were for start/pause, skip tracks, answer calls, etc. The vibration you feel on your cheeks depending on the tempo of the track you're playing can be a little unnerving but you get used to it in time and hardly notice it after a few runs in them.

Remember I said this works as a hands-free phone device too? Well, it does. Since it pairs with my phone, during one of my runs, I received a call from the office and it was as easy as just pressing the left button to pause the music and answer the call while on the run without having to stop running. Of course I sounded like an obscene caller on the other end but you get my drift on how useful the ATT is. Since it doesn't block the sound around you, it can also be used while driving. The ATT has IP55 sweat resistance rating and a 6 hour battery time which should cover your regular workouts or even within a 6 hour marathon finish. 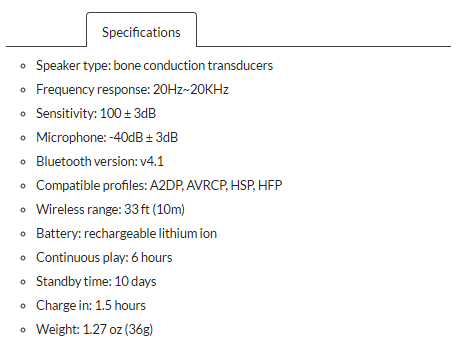 With one or two things that could still be improved, the AfterShokz Trekz Titanium has impressed me a lot. It could have its own storage capabilities instead of having to rely on a separate smart phone or Bluetooth music player and the sound could be a little better even for a tone deaf person like me but overall, I personally think it's a great workout device with emphasis on safety while on the roads.

I'm confident that the future releases of the ATT may come with built in storage which would make this an incomparable headphone with a strong emphasis on safety! The AfterShokz Trekz Titanium is distributed by Distexpress (M) Sdn Bhd and is available for RM499.00 at The MarathonShop outlets.