Day six of our stay in the Gold Coast saw us heading out of Surfer's Paradise and heading towards the mountains once again. This time it was a visit to the small township of Canungra. A visit to Canungra was initially planned for when we visited Mount Tamborine and we would have taken a different route back down the mountains and stop here for some pies at the Outpost Cafe but unfortunately the weather put paid to those plans.

Our day started late since we slept in a little longer. The wife was initially a little hesitant to go since it was pretty late in the morning but I convinced her that we had all day and I was keen to drive out of Surfer's Paradise once again. The day was a beautiful sunny day and it would be a waste if we didn't take advantage of it. I mean, we had lots of places nearby that we wanted to go but I wanted to eat the apparently famous pies being served at the Outpost Cafe.


So, after a quick breakfast at the apartment, we took a slow drive out towards Canungra. The drive itself was beautiful and scenic. It took us past areas and residential suburbs we never passed before (of cos, it made me long to stay here even more). We soon left the residential suburbs and hit the mountain roads which was devoid of traffic, save for one or two cars.

I loved the drive here and the surrounding foliage was simply so calming. You didn't have crazy lorries or cars trying to overtake dangerously like the drivers back home. Here, when a vehicle was tailing you, they kept at a respectable distance and only overtook at designated overtaking zones. This made driving so stress free!


Just before we reached Canungra, we passed by a military training zone that sternly warned the public from stopping by the side of the road or trespassing into the woods. There was the Kokoda Military Barracks just around here and I'm guessing they used the surrounding area for military training. Being a military buff, I was actually excited by this and was telling the wife I hope we get stopped by a tank or something .. Haha!


Our first stop before arriving at Canungra itself was at this place called Lahey's Tramway Tunnel. The tunnel was built in 1903 by the Lahey brothers back in the days when the timber industry was rife here and used for transporting timber to the surrounding areas. The line itself extended for 26 kilometers and in its heydays skirted around wonderful scenery and waterfalls. It was used to store ammunition for the Kokoda Barracks during WWII before finally being officially reopened to the public in 2001 and was added to the Queensland Heritage Register in 2005.

We found the tunnel on our first try, in part thanks to Google maps. The place was deserted save for the two of us. It was a short hike down and we were at the start of the tunnel. Sadly, the entrance was fenced off for safety but it would have been great if we could just go through it. Oh well, at least we can cross off one more thing on our list. We spent about half an hour or so there scouting the place and taking some pics and then we were off to Canungra town itself which was literally just down the road.


Canungra, is a rural town situated just 30km plus inland from Surfers Paradise. It is situated on Canungra Creek (a tributary of the Albert River), in the foothills of the McPherson Range. The name 'Canungra' is thought to derive from an Aboriginal expression describing a small owl. The town used to be well known for timber back in the old days, or so I was told by the friendly locals there. It was a really nice cozy town that depended on tourism for its economy these days.

Our first stop was of course the Outpost Cafe for some pies. Story had it they made deliciously huge pies here and I am after all a pie lover :D. The place looked cozy enough and was full of patrons. I had a hard time deciding on what pie to order cos I wanted everything! The pies were really in large portions. My wife couldn't finish hers and I gamely helped her finished it for her!


After the pie guzzling, we took a walk around the row of shops on both sides of the road checking out stuff. The weather was simply heavenly to be outside, sunny yet cool. Did I mention I could live here forever? My wife informed me that we did pass the area on our first year (2014) on the way up to Lamington National Park. It only then dawned on me that this place looked familiar.


After an hour or so walking around, we headed back to the car and it was time to leave. We had a few more places to visit for the day namely the Gold Coast Botanic Gardens and followed by the Evandale Lake and Sculpture Walk before we head back to Surfers Paradise and a visit to the Spit.

Our first stop was the Gold Coast Botanic Gardens located on Ashmore Road, Benowa. It was a little of a disappointment for my wife though once we got there. While the Gardens itself was nice and all but it was hardly very botanical. It was just a huge park, that's all. Nevertheless, we scoured the entire place, took in the sun, had ice-cream which was lovely, took pictures and headed off to our next destination, the Evandale Lake and Sculpture Walk.


The Evandale Lake and Sculpture Walk is situated behind the Council Chambers and the Gold Coast Arts Centre and set throughout the Evandale Parklands. Here you'd find 49 art pieces by both local and international artists. Unfortunately we encountered another letdown as the place was semi closed for some renovation and refurbishment and we ended up only being able to see one solitary sculpture. Maybe next year I'd be a lot more luckier.


We headed back to the apartment for a short rest before planning to head out just before sunset to get some vain shots of myself at the Spit Sand Pumping Pier along main beach. Unfortunately we forgot how early the sun sets here and by the time we got there and even then we headed to the wrong place, which was a little further which I dubbed the Phlegm since it was just a spitting (pun not intended) distance away from the Spit Pier!

There was a lighthouse here and vain shots opportunity were still aplenty though lighting conditions weren't ideal what with the sun having already set! Note to doofus self, remember the sun sets way earlier over here. We still had a great time looking out into the sea and admiring the Pier from a distance.  We finally headed back as we had to start packing for our departure the next day but not before stopping at the Philip Park signage to take a picture. I wanted to get a picture here ever since 2014 and I wasn't going to be denied one now!

Sadly, it was time to head back home today. It's been a fun filled week but our flight back home was scheduled for 10.10pm so we still had loads of time on our hands and the car was also booked till 8.00pm. That gave us time for lots more places to visit nearby before we'd finally need to be at Coolangata for our flight home. We checked out with a heavy heart from the apartment and decided that we must go back to the Spit again since we had loads of time on our hands. 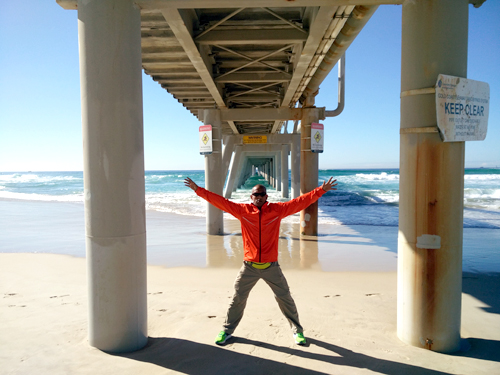 Off we went and found the correct entrance this time round that was actually an 800m walkway that lead to the sand pumping jetty, a pier that's quite popular for fishing and is a great place for some lovely pictures. You need to pay a small fee to walk on the pier which we declined as the beach underneath it was where we headed. The place was full of ocean loving dogs playing in the ocean and being a dog loving person, I was thrilled to see them have such fun. Took loads of pics and after an hour or so, we headed off for lunch.


Next on the list was to catch the Pelican feeding at Charis Seafood, Labrador. We reached there about half an hour early and had to endure the ... errr, horde of mainland Chinese tourists who doing their best to scare the Pelicans away with their 'impeccable' behavior. No further explanation needed. It was finally time for the feeding and the Staff of Charis had to clear a way for the Pelicans. It was fun watching and I've never been this close to a Pelican (a mere 6 inches away) before. I'm glad we came here to watch the feeding.


Next, we drove towards Paradise Point, a nice little suburb fronting Stradbroke Island. We ordered some coffee and cakes and walked over to the esplanade parklands along the east side of the suburb and took in the beautiful view. After more picture taking, it was time to finally head out of Surfers Paradise and head towards Coolangata. We wanted to beat the busy Surfer's Paradise evening traffic.


Since we still had loads of time before our flight, we stopped by Currumbin beach, wandered around the Wallace Nicoll Park and climbed up the Elephant Rocks Lookout point. The view was spectacular from the top and I was reluctant to leave!


After dragging ourselves away from here, we drove past Coolangata Airport heading towards Rainbow Bay. I kinda misheard the Google maps notification for a turn and almost ended up a whisker away from New South Wales. After getting our bearings right and paying a little more attention to Google maps, we found the right route again and was soon at Snapper's Rock, Rainbow Bay.

We could see Surfer's Paradise all the way from here and it made us miss the place again. The time for us to be heading home was drawing nearer again. We found a nice bench and sat down enjoying the late evening breeze from the ocean in the quiet neighbourhood. Rainbow Bay is a total opposite of the bustle of Surfer's Paradise. As always, you'll see people running along the beach which made me want to just join them!


We eventually drove to the airport where I returned the rental car and made our way in the airport building to check in and wait for our long 8 hour flight back home. As much as I would miss the place, I also missed home, the boys and Pebbles. We had an incredible time in the Gold Coast this year. I may not have achieved much for my marathon but I took in a lifetime worth of memories!

I'm not through yet. I will be back again next year. Like I said before, the Gold Coast is like my second home and I've yet to explore more of its beautiful places. Till we meet again #GCAM17, it's been a blast!