With no races planned in the near future, I've been finding it a lot more difficult to get my sorry ass out on the roads to train. Kicking myself out of bed has been the toughest bit of training I've been doing! When the cell phone dishes its military styled bugle themed alarm, I find myself making tons of excuses and wondering why it isn't raining or something so I could pull the sheets closer and just continue to sleep in.

Actually, I'm not being entirely honest when I say I don't have races in the near future. I do have them but they're mostly 5k and 10k races closer to home and at the risk of sounding cocky, I don't really feel the need to wake up so early everyday to train for them which is why I don't have the motivation to train these days. My daily mileage when I do drag myself out of bed more than covers the training needed for that.


But I know that will have to change soon. One 'huge' race I have planned is slated for November. I've always said I will never sign up for it but I keep doing it year on year like the idiot that I am. And that race happens to be the Toyo Tires Putrajaya 100 Miles. Wait, before anyone jumps to any insane conclusions, it's not the 100 miles and neither is it the 100km distances that I've signed up for. The past two editions saw me running the 52km category but this year I've opted to be even more idiotic and sign up for the 78km category!

Don't ask me why I pull stunts like this cos if I knew the answer to that I'd be able to solve the worlds problems at one go too. Maybe it's cos I like the way the Pacat team organize their races. I took part in their first ever 50km race eons ago when the sport of ultra running wasn't all that much of a thing. Back then I could count the participants with my fingers and toes. I suffered like hell that day and swore to every God that would listen I was never going to join one of these 'sick' races again. 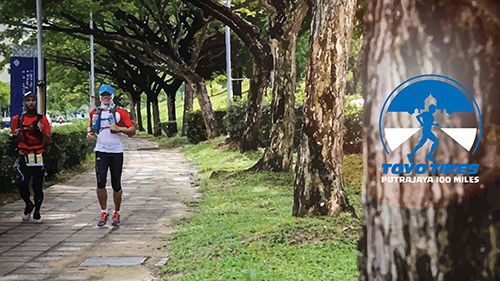 But there I was, cheerily clicking away like no tomorrow when entries opened up again the following year in 2014. Then once again in 2015, this time I even suckered Jeanie and Foo to join me in my stupidity. Oh boy, how I suffered through those 3 years. I never learn!

The first year was the worst cos it was done in the morning and by 12 noon (we all know how blisteringly hot Putrajaya can get at noon), I was walking aimlessly around some highway in Putrajaya hallucinating and talking to myself. The second year, I had Jamie along to get lost with and go the wrong way, with both of us ending up doing 56.5km instead of 52km. The third year, being held at night didn't make one goddamn difference cos I still suffered like crazy!


Then like the silly fool I still am, I go and sign up again, this time for the 78km category ... sigh! Why I insist on displaying my foolishness to the public at large is beyond me. But at least, I won't go this alone. I've got two equally insane fellows (you know who you are) to keep me company and hear me me swear once again to never sign up for races like these.

But silliness aside, the Toyo Tires Putrajaya 100 Miles is really a very well organized event run by the Pacat Adventure Team, a group of highly passionate ultra runners who knows what running is all about. The race is not a competitive one, the only competition you'll have, mind you, is with your inner self screaming at you for being so dumb. It's more of an event to give wannabe ultra pretenders like me a chance to taste what the pros go through. The cut off time is incredibly generous, in fact too generous if you ask me. But that's the whole concept of this race anyway.


Now, I'm no ultra runner, never claimed to be one and never will be either. I'm between marathons at the moment and signing up for this would give me the chance to work the legs for really long distances of running, something that was solely lacking in my previous training. My legs have gotten 'soft' and this is one way to kick start them again before I embark on my next phase of marathon training targeting a March 2017 marathon.

Competitive or non-competitive, the training will still be needed to be put in to get through the race in one piece and hopefully that will build up my motivation to run again. I've always taken all my training seriously and having a goal to train for makes training a little more fun. So here's to finding my running mojo back again soon!


*I can't remember who took the pictures so photo credit to respective photographers.