Up until a month back, the Saucony Kinvara 7 has been my favourite of the Saucony range of running shoes, aside from the Type A6 and the Fastwitch 7. The Kinvara 7 served me well for most types of running, fast, slow, long, ultra distances and was my go to shoe most of the time.

All that changed when I got my hands or rather feet on a pair of Saucony Freedom ISO. The Freedom ISO is an entirely new line of shoes that takes Saucony towards a new direction. The Freedom ISO was designed to push the limits of energy return, responsiveness and cushioning. 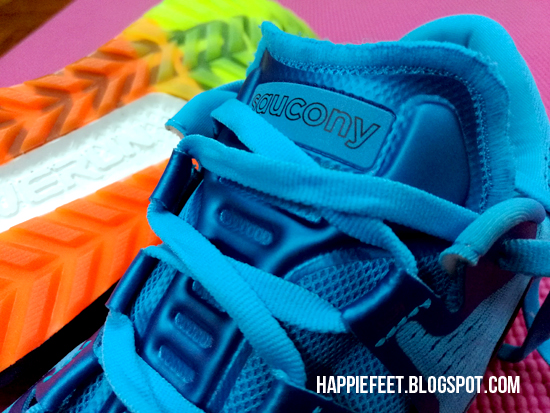 The Freedom ISO is also the first shoe from Saucony to feature a full length EVERUN midsole. The EVERUN  material is similar to the Boost and promises better energy return and durability than your standard EVA foam found in most running shoes and is a lot more temperature stable. If you ask me, this EVERUN (and Boost) technology variants give both brands an undeniably competitive edge in the running shoe business. How many other EVA or Gel based foam materials out there really come close to the functional and sensory benefit of the the EVERUN and Boost material?

The first time I slid my feet into the shoe, the ISOFIT molded nicely to my foot. In fact, it felt plush yet firm the moment I started running in them. A nice smooth, fluid ride with a continuous underfoot feel yet with adequate cushioning and response is how I would describe my first time with them. I was sold. I had a new favourite running shoe and couldn't wait to really put them to the test. 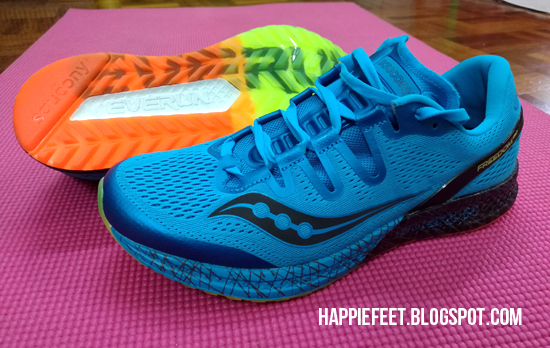 The upper of the Saucony Freedom ISO is essentially a support cage wrapped around the foot. The upper material is constructed of a single piece engineered mesh which is loosely translated as variable weave and layering in different sections. The upper itself is pretty stretchy and the fit is true to size that had a slightly snug fit around the midfoot and a little give around the heel area but the lack of any bulky structured overlays allows the mesh to stretch and accommodate much wider feet.

The lacing is attached to the upper mesh itself and runs through fabric loops save the topmost lace hole which is still the traditional eyelet. What you're getting here is laces that pull firmly against the sidewalls of the shoe for better lace tension adjustment. The tongue of the Saucony Freedom ISO is attached to the inner sleeve of the shoe which is totally separate from the outer mesh upper. I like the tongue which is minimally padded and comfortable. For structure, fused laminates are used at strategic points of the upper such as the toe bumper and the lace loops that not only provide support but a back up against fraying. 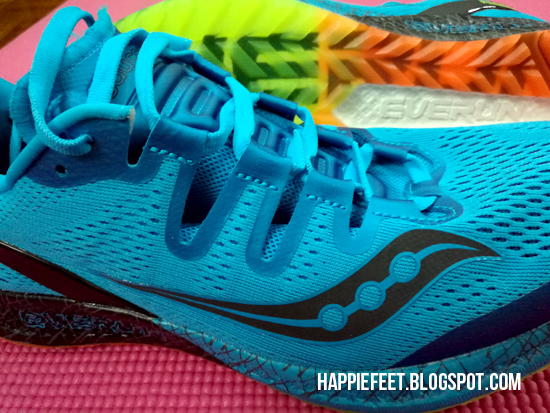 Design wise, the upper stays pretty quiet, with just a thin plastic band which connects to the midsole that wraps your heel for more support since the Freedom ISO lacks an internal heel counter. The lining of heel is minimally padded somewhat like the Kinvara. Personally, the lack of more prominent reflective material is disappointing since I run during the wee hours of the morning or late evenings when it's dark. The only reflective trims you'll see are at the heel and top of the tongue but even then they're not nearly reflective enough to make much of a difference so it's a good thing that my apparel are reflective enough. 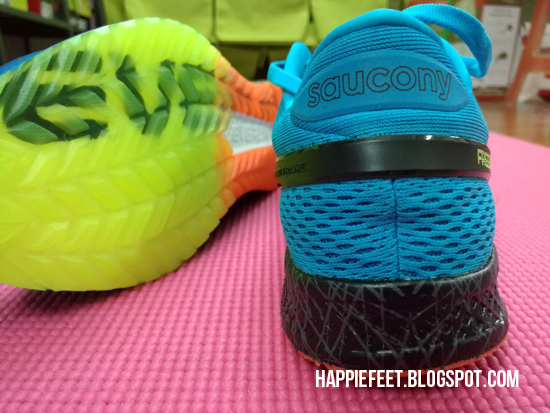 The highlight of the shoe is its midsole. This is what makes the Freedom ISO special. The entire midsole is made up of the EVERUN material, which is the first in the Saucony running range to have them. The sidewalls of the Freedom ISO's midsole has waffle like moldings throughout. I'm suspecting this waffle like molding resulting in a more compressed EVERUN midsole is what gives the Freedom ISO a firm feeling. Turning the shoe around, you'll notice a big huge EVERUN text embossed into the dual colored foam which is kinda cool. A conventional EVA foam insole lines the inside of the shoe. 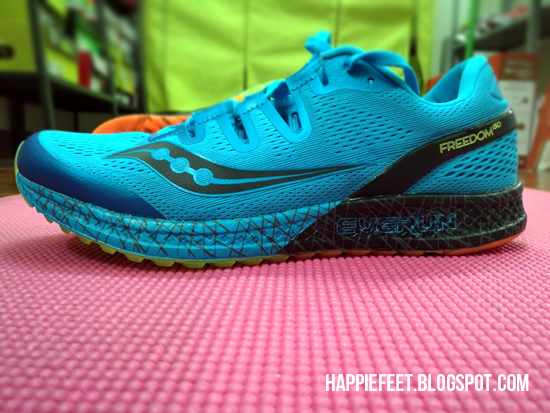 The Freedom ISO is a 4mm drop shoe with a stack height of 15mm in the forefoot and 19m in the rear. I'd put them in the minimalist range and while it's adequately cushioned, it's nowhere near cushy as say, the Saucony Ride 9. It really rides much lower to the ground (which I absolutely love). The fact that it's much lower to the ground improves its responsiveness and is a much more agile shoe that's easier to control, be it a speed run or an easy one making it a good companion shoe for those who like doing their speedwork or short runs in lower drop shoes like the Kinvara.

I love to run in shoes like the Type A6, the Fastwitch 7 or the Kinvara 7 and those shoes are really pretty lightweight and the Freedom ISO weighs in at 9.0 oz which makes it the heaviest amongst those three lightweights. While it's only 9.0 oz, I still did feel a discernible difference in weight and it did raise some concerns on whether it would pose a problem in later stages of a marathon. But after a few kilometers in them, the weight difference was hardly felt at all. The rest of the benefits totally outweighed any issues with the weight! 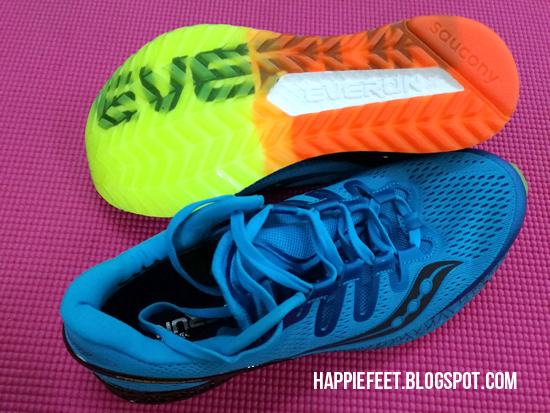 A Tri-Flex outsole with chevron pattern lugs makes up the unique outsole of the Freedom ISO. The highly durable 'Crystal Rubber' material used for the outsole is transparent and allows the painted colors of the bottom of the midsole to show through which also shows a huge EVERUN text on the bottom, kinda neat if you ask me. The 'Crystal Rubber' material is not just for cosmetics as it's also really highly durable. I've run more than 100km in them and they're still as new as the first day I got them. 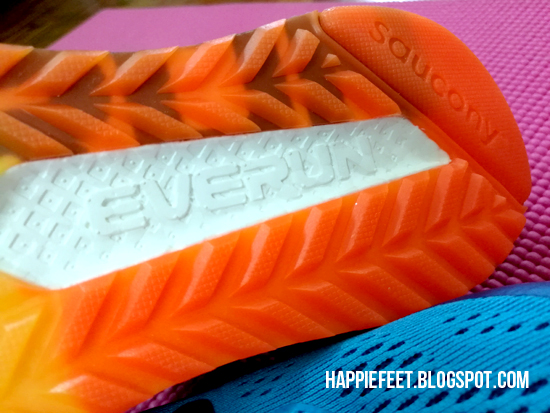 You'll find a cutout with the words EVERUN along the heel to the midfoot that exposes the EVERUN material which allows for some flex and impact absorption and a slightly bevelled lateral heel section for a smoother landing.

I've had the Saucony Freedom ISO for a little over 3 weeks and managed to get 100km in them in just the first 9 days of using them, that's how much I like them! I found the Freedom ISO to be one of the best shoes I've used in a long while. Firm but with an excellent mix of cushioning, responsiveness, support and ground feel.

I've run them in both wet and dry surfaces on asphalt and pavements, both fast, slow and long runs and the grip is phenomenal in all those conditions. Being lower to the ground, control was excellent and I never had to worry about my feet at all. The firmness and responsiveness makes them good for those days when you want the speed and the cushioning makes them ideal for those really long runs. There really is nothing for me to complain about in the Freedom ISO. 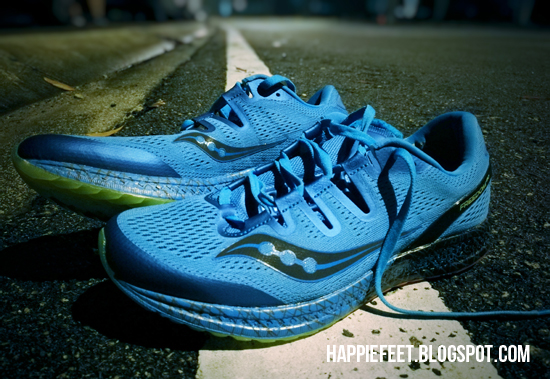 My wife has also taken them out for a short stint around the neighbourhood and while she kinda loved the shoe, especially the stretchy upper (she has much wider feet than me coupled with bunions), she found them a little hard on her feet and had achy calves almost instantly after the run what with it being a much lower drop shoe than what she's used to. She runs in the Zante currently. I was secretly hoping she wouldn't like it cos she's been known to 'borrow' my shoes out for runs ... hahaha!

I've been experimenting and was a little undecided on what would be my marathon shoe. It was a toss between the Kinvara 7 or the Fastwitch 7 but with the Saucony Freedom ISO thrown into the mix, the Freedom ISO has become the obvious choice!

The Saucony Freedom ISO is currently not available locally but will be launched in the near future in all Saucony outlets. Do stay tuned for the launch dates. I will also post more information on its launch once I know more.

Disclaimer - The Saucony Freedom ISO review above is from my own personal experience and time spent running in them. This review is in no way whatsoever influenced by Saucony Malaysia.