I've had the Saucony Ride 10 for quite sometime now and this review is long overdue. A lot has been happening and this review was put on the back burner for way too long. It's going to be a busy week for me and before it does, I'd better get this review out right now. The model I'm reviewing is the Heathered Chroma Pack edition.

The Ride series is now into its tenth iteration and prior to this I've only run in the Saucony Ride 9. Just like its older sibling, the Ride 10 falls into the neutral daily trainer category as an all round shoe for everyday running. While that might be true for some, it wasn't entirely true for me. I felt the Ride 9 was a little on the narrower side of things but the Saucony Ride 10 does feel a lot wider this time around and doesn't feel as plush. 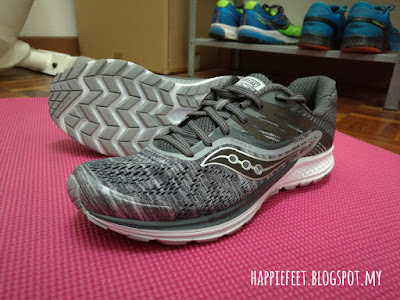 But that said, the Ride 10 remains a relatively comfortable and lightweight neutral running shoe bringing with it some new innovations like a brand new upper and external design changes which gives the Ride 10 a totally different fit quality over its elder sibling.

The upper on the Ride 10 features a new and fully engineered mesh that sports large venting holes, using a combination of vented and closed sections over a single component, from the front of the shoe towards the midfoot area which is a departure from the regular spacer mesh that was part of the upper for the Ride 9 which makes the Ride 10 extremely breathable and very accommodating providing support when needed. I liked this upgrade a lot as it made the Ride 10's upper feel a lot 'softer' than the previous iteration. 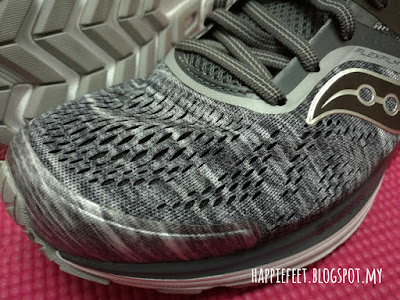 The FlexFilm overlays are this time more concentrated around the midfoot rather than the forefoot sections with emphasis on the medial side. the toebox is now a lot roomier than before and would fit a wide variety of different feet. While there's quite a few sizeable updates, you'll still see lots of familiar features from the Ride 9, for instance the molded toe bumper while a little shorter is a carry over from the previous model.

The heel counter comes with a collar lining made out of two pieces of Saucony's RunDry material and is a little firm but provides just enough support for the heel. The other bits that you'll find familiar from the Ride 9 are the tongue lining which is as padded as before (too much padding for me) and the flat, semi-elastic laces. 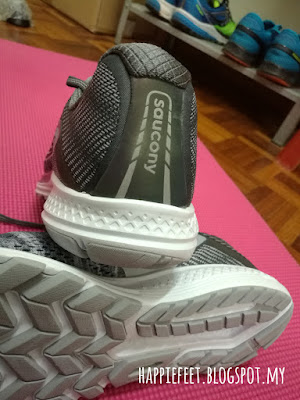 The midsole of the Ride 10 now uses a single piece, single density EVA material which Saucony calls Power Foam and is said to retain 50% cushioning over the prior SSL EVA with a consistent cushioning over the lifespan of the shoe. On the insides you'll find a removeable EVA foam insole and an Everun topsole over the primary midsole. The topsole of the Ride 10 is thin layer of the Saucony Everun material serving as an additional layer of protection and is very different than how the Everun material is used on the Freedom ISO in which the entire midsole is made of Everun. The bottom line though is this gives the Ride 10 a much softer and more cushioned ride than the previous model. 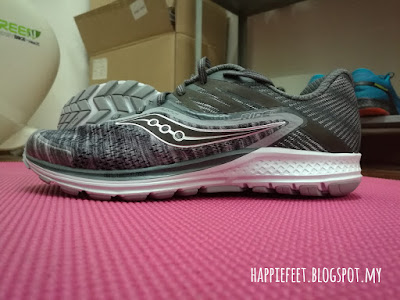 The outsole of the Ride 10 is based on Saucony's newer Triflex geometry with the much firmer long wearing XT900 rubber offering some very good transitional support. With the SRC Crash pad removed, the rear of the outsole is glued straight to the foam midsole with an exposed area in the midsole just under the heel which is found in most Saucony running shoes. Overall, the Ride 10 has a solid build with a strong upper and plenty of outsole rubber for a longer lasting wear. 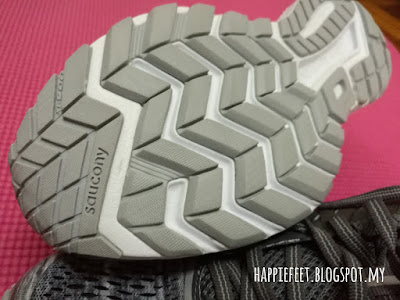 My previous experience with the Ride 9 gave the shoe a pretty narrow and shallow fit but the Ride 10 eases things up a lot. There's a lot more room in the forefoot and a lot better ventilation than the Ride 9 which is mostly because of the mesh forefoot material. With the FlexFilm now concentrated around the midfoot, the fit is nice and snug! The Ride 10 runs true to size for my feet which are US9's.

The Ride 10 has an 8mm offset and weighs in at 9.5oz for my US9. It's not exactly a lightweight shoe in my opinion since I'm used to much lighter shoes but Ride 10 does provide a very cushioned and consistent ride for those days when you need to go long. I've put some miles in them though not as much as I'd love to but from what I've gathered so far, the Ride 10 feels a little less snappy and a tad less responsive than the Ride 9. If I had to make a comparison, I'd have to say the cushioning characteristic are closer to the Kinvara 8 than the Ride 9 which isn't all that surprising since both the R10 and K8 uses an injection molded foam midsole with the Everun Topsole. 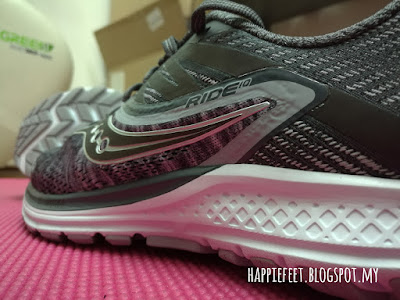 But as mentioned earlier, the bottom line is the Ride 10 provides a much more cushier and balanced ride which in turn makes this shoe a decent daily trainer that works well for a wide range of workouts. I've used the shoe in various sessions taking it out from slower sessions to speed and tempo work and while I did have to initially break in the shoe a little (which is rare for me), I eventually got used to it. For me a shoe that works well is one that you totally forget that it's on your feet the moment you put them on but the Ride 10 took some getting used to to eventually not 'feel' it on my feet.

But I think Saucony has done a great job with the update this time round with the appeal of their middle range neutral trainers. If you're looking for a mid range neutral and moderately cushioned shoe, then the Saucony Ride 10 should be right up your alley. 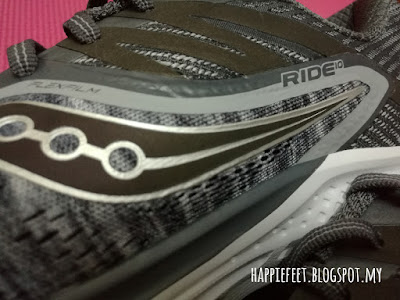 The Saucony Ride 10 is currently not available in Malaysia just yet but I will update this review when it's launched here in the very near future.

Disclaimer - The Saucony Ride 10 review above is from my own personal experience and time spent running in them. This review is in no way whatsoever influenced by Saucony Malaysia.