Since way back in 2014, the Gold Coast Marathon has been a favourite of mine. In fact, I love the place so much that I've dubbed it my second home and I've never missed heading there every single year since then. The past two years has seen me having some difficult times over there with a DNS right before race start in 2018 and a DNF in 2019. I was really looking forward to it this year to make amends for it.

But as we all know, the year 2020 has been an official washout for practically every race worldwide and the Gold Coast Marathon was no different. Up until the announcement for the cancellation of the live event, I was holding on to some slim hopes that it might still go on but it was a no go. It must have been a hard call for the organisers themselves but I believe it was the right call to make. Kudos to them on making the call.

The Gold Coast Marathon organisers though, in the spirit of keeping the running going decided to turn it into a virtual series of races instead to keep the #goodtimes going. Now, to be honest, I'm not really a fan of virtual runs but this was an event close to my heart and besides, the Big Four bundle enabled me to run all four events, the 5km, the 10km, the Half Marathon and the biggie itself, the Marathon. These series of virtual races were entirely free so I jumped at signing up with some of the more hardcore GCM MY team members who had signed up for the Big Four as well. At least I would have company.

This was all in the name of fun and keeping the #goodtimes going. Running the 5km and 10km wasn't a huge deal. I was planning on keeping things easy and just enjoying the process. But somehow the competitive me decided to take it flat out for both the 5km and 10km as I knew my crazy team mates would be doing the same. While missing both my 5km and 10km personal bests by a mere few seconds, I was still happy that I could pull off some of the old speed.

The half marathon was a more challenging matter for me. I've hardly been training. The morning runs I've been doing are just easy maintenance runs with a weekly mileage averaging 30km a week! But I managed to get through it in one piece and it wasn't as tough as I expected it to be. And it was down to just one more, the marathon itself.

Of course, with the bunch of people I run with, the expected "drama" started weeks before. I've not run a marathon in this country in years cos of the ridiculously early start time to avoid the sun and heat. So, we all agreed to a start time of 3:30am at our "home turf" Peremba. It was going to be 7 loops of 6 kilometres, already a mental challenge for me cos I simply hate loops. I seriously had no expectations for this, what with the measly mileage I've had leading up to this. My hope was just to finish it in one piece with no injuries and purge the marathon hoodoo (as Jamie nicely put it) once and for all.

I decided to start at 1.30am as I knew the gang would be running at a faster pace than me and I wanted to complete it around the same time as everyone. When you've run with this crew for as long as we have, you know how fast each and everyone is and you adjust your start time accordingly. The start for me was pretty much at a very easy pace. I was happy if I could just sustain a 7:00 minute pace throughout as I knew there would lots of walking too.

The first 18km before the gang turned up was decent and surprisingly faster than I expected. I was feeling comfortable but was a little worried that I was going out too fast. We all know a marathon really starts much later in the game and I didn't want to fade out too soon. The gang turned up as planned and I stopped for a quick photo with them before we all headed out. It was time to focus on getting it done.

The rest of the way was nothing spectacular, I ran when I could and stopped to walk when I had to. The good thing about this 6km loop was that we'd pass our cars every 3km and could simulate a water stop to keep hydrated. I had a simple hydration plan of just water and isotonics on standby with my soon to be expiring gels which I only used up 3 sachets (2 Horleys and 1 Maurten), way less than my normal 8 sachets for a marathon.

The last 10km was a real struggle to keep going but the sight of many supportive familiar faces of the rest of the team who were slowly turning up to finish their 5km, 10km or Half Marathon distances spurred me on and so I trudge on till the end. When I finally crossed the "finish" line in a time of 5:02:21, I was ecstatic. I had finally broken that marathon jinx of two years that has been following me like the plague!

The gang were also just about finishing with their respective excellent personal challenges and we can all agree that we were glad to get it over and done with! As for me, it was a huge sigh of relieve to walk away from this unscathed with hardly any training and just based on hope and determination.

A huge kudos to the Gold Coast Marathon organising committee for keeping the #goodtimes going with this series of virtual races. Keeping the event free and for everyone to participate in the spirit of running says a lot about the passion of the organisers. While I missed the after race sight seeing and fun this year, I still had a great time running the series of races.

There will not be anymore virtual runs for me this year and I intend to take things easy till the year end and hope this pandemic will improve as soon as possible. We could all catch a break in this especially bad year that's called 2020. That said, hoping everyone the world over does their part in making that a reality. See you next year Gold Coast and once again, thanks for the #goodtimes. 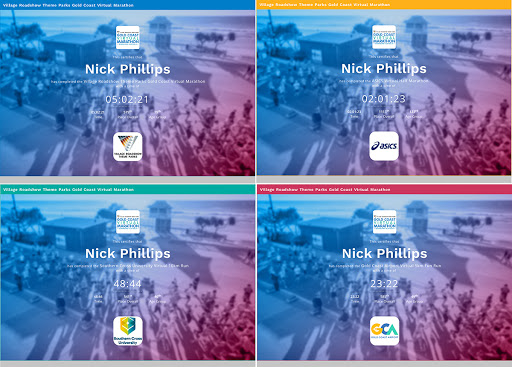