With all the hype and interest going around these days in the numerous carbon plated shoes that sometimes we forget that there are some pretty great traditional running shoes out there and one such shoe is the Saucony Kinvara 12.

I've always been a fan of the Saucony series of shoes since way back in my ambassadorial days with them. The Kinvara series was definitely the top of my running shoe list back then and even featured as my go to marathon shoes, aside from my other favourite, the Skechers GOrun series. But over time I've experimented with numerous brands, what with being a shoe geek, I'd always want to try new shoes personally before making any unfounded judgement on a shoe, that's how I roll anyway. 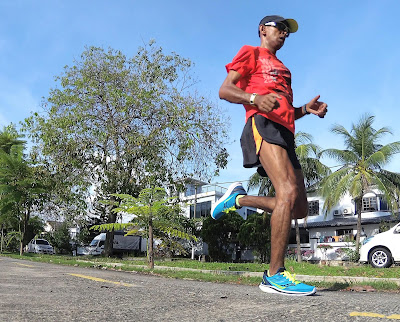 The Saucony Kinvara 12 was an unexpected purchase. I wasn't really intending to get any shoes just yet, what with no physical races at the moment but upon deciding to sign up and run the Gold Coast Marathon virtual edition of the race, I needed a workhorse of a shoe to see me through the training process. There were a few in mind but were unattainable cos, if I'm being truly honest, the brands weren't really helpful with my inquiries and were also in the midst of transitional management changes so bringing in the newer models weren't really on their list of priorities.

So, after looking around (budget also played an important decision here) I decided to give the Kinvara 12 a try after reading reviews on it from my usual sources. Like I said, I don't solely depend on reviews and would personally try a shoe before deciding if it's good or bad (for me at least). After a few text exchanges with Frank of Running Lab 1 Utama, I headed over to get myself a pair. I was forewarned by Frank that Saucony Malaysia only brought in the wider version of the shoes. Thankfully, upon trying it out, it fit me to a tee and I wasn't even using thick socks. 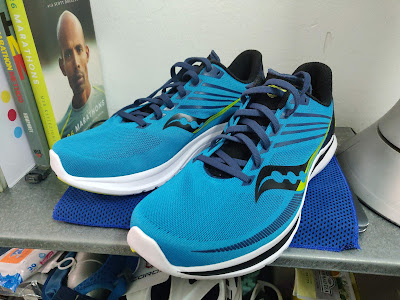 Although, the colorway wasn't what I really wanted, I got it all the same and have so far put in more than 50km in the Saucony Kinvara 12. I had a good 2 weeks to see if it would be my Gold Coast training shoe so I put it to the test immediately. I was already impressed with them even after my first run, but that was to be expected as the Kinvaras of the past were all pretty decent shoes, granted my last pair was the K8, of which miraculously I'm still running with.

The Saucony Kinvara 12, now in its 12th iteration is still a reliable, extremely responsive and lightweight (at 7.5oz for a men's US9) shoe with a more sleek, streamlined look and feel. The K12 like most of its previous siblings is versatile (a seriously overused word) and is capable of taking on all kinds of runs, from easy shakedowns to those long weekend miles making it capable of performing as a daily trainer, speed trainer right up to being a comfy long run shoe. 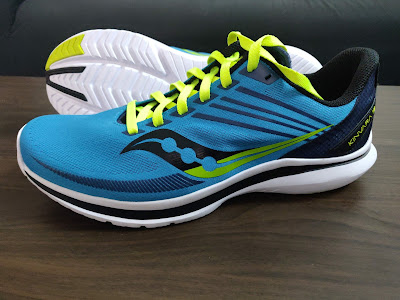 The PWRRUN midsole that was found in the K11 makes a return to the Kinvara 12 and most reviews said that the shoe is lot firmer than the past years editions though I really cannot attest to that as my last experience in a Kinvara was with the version 8. No big deal really as I found it very comfy and if I may say, nicely cushioned. As with all Kinvara models, once you've experienced using them, there is literally no break-in period at all. It was good from the get go, a smooth ride and extremely responsive.

The most noticeable difference of the Kinvara 12 is the shape of the PWRRUN midsole. It dovetails out from the heel of the shoe giving it a somewhat Nike Vaporfly kinda look which is supposedly a design to add a more aerodynamic feel to it. The PWRRUN midsole though delivers by striking a perfect balance between the responsiveness and lightweight cushioning of the Kinvara 12. 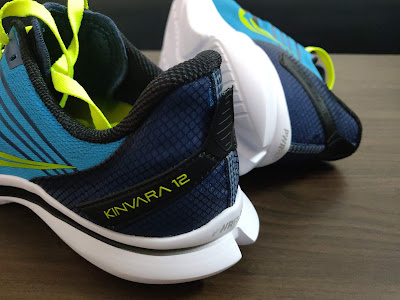 The upper of the Saucony Kinvara 12 is kept very simple. Saucony has basically stripped away any excess padding and left it with just the basics, a breathable and very lightweight mesh that wraps the foot nicely. And trust me on the breathability, I could feel the cool morning air flowing through my toes. The tongue on the K12 is actually one of the more interesting aspect of the shoe and possibly one of the better tongues I've seen on a shoe so far. From the outside, it looks flimsy but upon looking at the flip side, you'll see gentle padding in just the right places to protect your arch from the laces and is gusseted running down both sides of the foot to keep in comfortably in place.

My biggest worry upon seeing the shoe when I first got it was the outsole design. It was entirely exposed foam with injection blown rubber only in two strategic places, the heel and forefoot and leaving the rest of the outsole in direct contact with the ground. I was afraid that the durability of the outsole wouldn't last long, what with the mileage I'll put into the shoe during this particular training block. But it was a needless worry, the outsole was and is sturdy enough to take the rigours of daily running and despite the very minimal rubber segments, it had great grip on all surfaces. I've ran it on dry, ground, wet after rain roads and even on grassy terrain and it held up pretty well. In fact, the exposed chevron patterned outsole hardly has any wear to date. 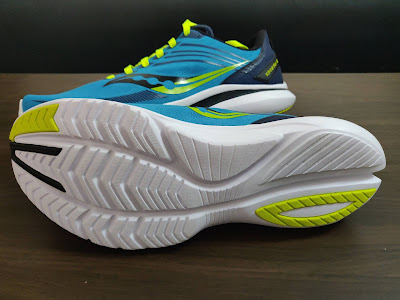 My only gripe with the Kinvara 12 is the overlay of a thick strip of rubber like material that ends with a pull tab on the exterior of the heel which in my opinion serves absolutely no purpose whatsoever. The pull tab is virtually impossible to grip and having it removed may have even cut the weight of the K12 further.

Like I said earlier, I've put more than 50km into the Saucony Kinvara 12 and I've no regrets buying it. Until Saucony's Endorphin series came about, the Kinvara's reigned supreme as the brand's most recognizable model and while it no longer holds the top spot in the Saucony hierarchy as their number one performance shoe, it still does provide an excellent option for the budget conscious out there and works just as great as a daily trainer capable of easy runs, tempos right up to those longer miles. And most importantly, the Saucony Kinvara 12 is more than capable of holding its own in a 5k race just as easily as in a marathon! 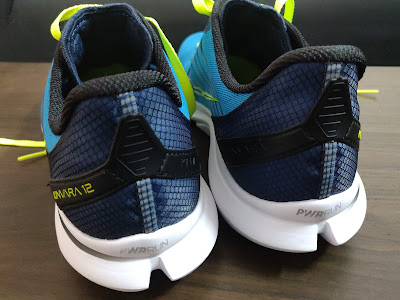 The Saucony Kinvara 12 is a 4mm drop (28.5mm/24.4mm) neutral trainer that weighs 7.5oz for the men's US9 and can be found retailed here at RM489.00. In the age of the carbon plated heavy weights, would I recommend this shoe? If you're on a budget and prefer the more traditional daily trainers, then yes, absolutely. The Kinvara series has been a fan favourite and as far as I'm concerned, it's still a very good daily trainer that can handle a host of workouts. 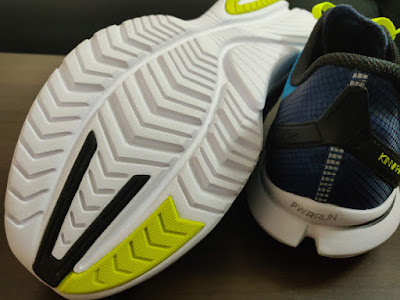