I was out with the missus today at Sunway Pyramid getting our weekly sports outlet fix and stopped at the Adidas shop there. Now, while I'm currently using a Brooks Ghost 3 for most of my runs, I've always been a fan of Adidas running shoes.

I'm in the market to get a new pair of shoes seeing as how my trusty old Ghost 3 is already showing signs of aging. I've already got my eye on the Ghost 4 that is due out in a few months. I still have two other running shoes, an Adidas and a Mizuno but I was practically on the verge of buying the Adidas Climacool Ride running shoe today. 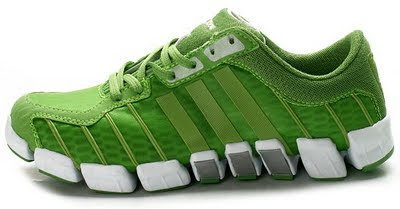 I tried it on and I kinda like the feel to it but was a little skeptical as it felt kinda naked on my feet. I'm pretty used to my snug and well cushioned (albeit a little heavy) Brooks that the Climacool Ride seems to feel like I have nothing on my feet.

While I'm bloody tempted to buy the shoe, I just don't know if it's the shoe for me. I'm not young and I tend to worry about the impact that runs through the length of my feet and the Climacool doesn't seem to give me that 'protective' feeling unlike my Ghost 3.

I don't know, I could be totally wrong and the cushioning of that shoe could be phenomenal but at RM369.00, do I dare take the risk of buying it and end up not using it like my Mizuno Wave Precision 10 which looking back was practically the wrong choice of shoe for me.

One thing I can be sure of is that the Climacool Ride is really 'cool' and breezy and would probably be a swell shoe to run in. The green one absolutely makes me salivate over it but like I said, it's a little on the high priced side to experiment with and let it gather dust. Wouldn't it be great if we could trial run a shoe we liked for a bit and then buy it if it was right for us? Siggghhh ... stop dreaming Nick!

But I'm still bloody tempted to get it though and with wifey prompting me to try it out, it makes my decision all the more difficult. Do I wait for the Ghost 4, a shoe that I know will be right up my alley or go and try something new, something that feels so minimalist that I don't know if it is the right shoe for me? What do you think?