It's been a really busy work but I still managed to find the time to run a triathlon! And boy, was it a stretch to finish it!

Ok, ok, I didn't run a triathlon, not that I could even if I wanted to cos the moment I hit the water, I'll sink to the bottom. So, what do people who have delusions of wanting to do a triathlon but can't swim for nuts do? Why, they just log on to their PC and play Extreme Triathlon, that's what they do ... LOL! 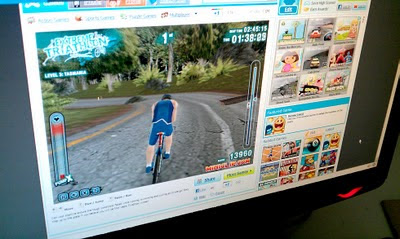 I was about to head for work yesterday when I saw the younger boy (who skipped school cos of fever and cough) playing this game called Extreme Triathlon and I was instantly curious about it. It had all the elements of a triathlon - swim, bike and run. And it looked pretty darn cool too.

So, when the opportunity for a little free time came up, I gave it a try and though it was a pretty cool game, one thing's for sure, I can't swim for nuts even in a game, I think I came out last ... hahaha!

Well, at least now I can say I took part in a tri without leaving my desk! Oh and apparently that little brat actually came out in first placing and put me to utter shame ... hahaha!