It's a great feeling to be running a race again with a whole bunch of other runners. The weather was beautiful (though a little hazy) and the run was a good one. The only thing that caught me off guard was the last minute change of route to avoid clashing with another race being run nearby.

As usual, the wife and me got to the race location a little early to make sure we get some decent parking nearby. I was a little worried about the race cos both of us only had about 3 hours of sleep and we both woke up feeling like zombies. Didn't want the lack of sleep to hound me throughout the run so once we reach the race location, we parked the car and snoozed for 20 minutes.

While waiting for the race to start, an announcement came that got me worried. They made a last minute change to the race route (maybe they did send notices but I sure as hell didn't get any) to avoid clashing with the Pudu Charity run. No big deal really but I had my mind tuned to the original route and had all my race pace planned for each section of the race and this sudden change really had me running blind as I had no idea where the new route would take us.

The race started exactly on time and I was cursing the moment I hit the Jalan Parlimen stretch as it was a 1KM incline with a horribly cambered road that made running up that stretch pretty uncomfortable. By the time I hit the top of that stretch I was panting for breath. Thank god for the short decline immediately after that.

From that point it was pretty flat but I decided to keep it at a steady pace to prepare for anymore of those goddamned hills that may litter the route further up ahead. And my guess was right cos from KM6 or so, the route hit the stretch behind the National Mosque and I knew I was in for a tough hilly stretch which I've never run before.

It took quite an effort to negotiate that stretch and once I was out of the Bukit Aman area and heading back into Jalan Parlimen, I thanked whatever gods that watch out for 'poor aged and totally on the verge of collapsing runners' like me for the downhill stretch to the finish line.

Actually the finish line was like about 2KM away but heck, a downhill stretch is always welcomed. From that point, after a short slow down in pace, I picked it up for the last 1.5KM that saw me hitting a sub 5 minute pace to the finish line coming in with a time of 52.29 in position number 57 to pick up my much deserved medal. 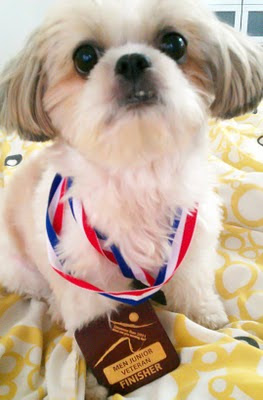 Overall the race was organized pretty well. I have not a single complaint, well except for the sudden route change, about this event. The wife had one complaint though and it isn't at the race organizers, it was aimed more towards the drivers who had to wait in traffic that was blocked by the cops to let the runners pass by. According to her, they kept honking and harassing the runners for ruining their Sunday morning drive for getting stuck in traffic.

I don't know la, you people knew there was going to be two runs in KL and notices were posted weeks in advance so it's your own fault for wanting to drive through the race route. Besides, give the runners a break la, we're busting our asses out there running while you're sitting there in your air-conditioned cars and you can't wait till the runners pass? It's not like we do this everyday!

With that said and done, congrats goes to the wife for a personal best for her 10K and here's looking forward to next weekends Adidas KOTR.