I'm a heel striker by nature. I've been heel striking for as long as I can remember. The worn out heel sections of my previous running shoes can attest to that. All my running shoes were mostly bought with lots of cushioning in mind seeing as how I have weak knees. In fact I land heavily on my heels and these heavily cushioned shoes helped reduce the impact considerably.

About 7-8 months ago, the thought of experimenting with minimalist shoes and mid-foot striking was playing heavily on my mind. As I got more technical in my runs, I found the heavily padded shoes that I owned like the Ghost 3 and the Litestrike Eva (though not as heavy as the Ghost) was weighing me down on my runs. Leg fatigue set in easily especially in the longer runs.

I was a little skeptical though. I didn't think my feet were suited for minimalist shoes. Let's face it, my legs are not as young as they were and minimalist didn't really offer much protection and besides I was a natural born heel striker. Tying to adapt and change my style and method of running at this late in the game was going to be daunting not to mention a little risky to the feet.

Nevertheless, I did some research on minimalist shoes and mid-foot striking and made a decision to buy the Brooks Green Silence. I fell in love with the shoe the moment I laid my eyes on it. I used it for a race, the BHP Orange run, I think, without even breaking it in (something I've never done before) and thankfully came away unscathed from that experience. Though it was virtually impossible to heel strike with that shoe, being a natural heel striker, I did on quite a few occasions land on my heel.

But overall, I was landing more on my mid-foot than heel and it was a total new feeling to me. Now, for those of you who don't believe there is a real difference in heel striking and mid-footing, let me tell you there is. That run was one of the better runs that I did and I think that was when I was convinced that minimalist shoes and mid-footing were for me.

I started doing more research and trained myself to run mid-foot more often. It wasn't easy, mind you. I had to consciously concentrate and force myself to run mid-foot as I still tended to heel strike quite a bit. It took a while and slowly but surely it got to be a more natural form of running for me and I was mid-footing without having to think about it.

Around this time, I retired my 'heavy weights' and bought myself more minimalist and light weight trainers that enabled me to consistently achieve mid-foot striking. Judging by the wear in the circled sections below of my Brooks Launch, I must be mid-footing more naturally these days, in fact I think I'm landing more on the balls of my feet. There is hardly any wear on the heel sections of both my Launch (yes, I have two Launches), my Pure Connects and Green Silence (new heel wear, that is). 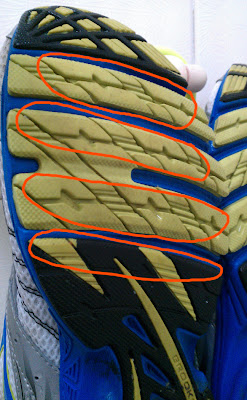 What I can bring from my transition of being a heel striker to a mid-foot striker is that my running posture has improved tremendously, I'm able to land much lighter on my feet, I'm able to toe off much easier and faster and it has helped with my performance quite a bit. Switching to total minimalist and light weight trainers has also reduced leg fatigue considerably.

But that doesn't mean I still don't heel strike. When I'm really, really tired in my runs, I tend to strike my heel and it takes a considerable amount of effort and concentration to force myself to mid-foot strike. I guess old habits die hard. But overall, I'm happy with the switch and can safely say that it was the right thing to do.

I could never go back to those much bulkier, heavier and more cushioned shoes even though I salivate looking at the Ghost 4! Right now, since my shoe ban has expired, I've got my eye set on the Saucony Progrid Kinvara 2, though I'm waiting to look at the Skechers GoRun on the wife's advise that it's coming to these shores soon.

I know, you're probably screaming, Skechers? But heck, Meb Keflezighi couldn't have been wrong when he won the recent Olympic Marathon trial in a Skechers now could he?