Now Josie Huang should take a leaf from this race about how to organize a PROPER running event! Energizer has completely redeemed itself from the ghost of last year's event with this very well and professionally organized race. I'm not going to say much about the organization, if you were there you'd know how smoothly it went, from the orderly parking, to the proper positioning of the carnival area, efficient distribution of the headlights, good baggage handling, beautifully staggered starts to the incredibly fast and efficient goodie bag and medal collection.

The race had more than enough water stations and marshals along the route coupled with clapping and enthusiastic cheer leading teams to motivate the runners which all helped in making this so far one of the best races I've been to. I'm a perennial complainer, yet I have not a single complaint to make about this race. Good job Energizer and Twenty First Century Sports for an enjoyable race outing!

Now back to the race proper. The wife and me got there pretty early cos we were worried about parking which was needless cos parking was a breeze with a host of volunteers directing everyone to parking slots. Walked up to the carnival area which I thought was a much better location than last year. That kept everyone, non-runners especially, from littering the start line taking pictures on the track.

The route on the track was the reverse of last year but I knew what to expect on the track and paced myself properly. Most people underestimate the inclines of the track and true enough, I saw quite a few people already walking after the first 2km on the track. Ran the track section of the route pretty much effortlessly.

The water stations were more than enough and stationed at exactly every 2km which made it easy for me to plan my hydration and fueling needs. Skipped all but two of the water stations and that only to wash down my energy gel and moisten my dry throat. The volunteers at the water station deserves a pat on the back for their efficient management of these stations. 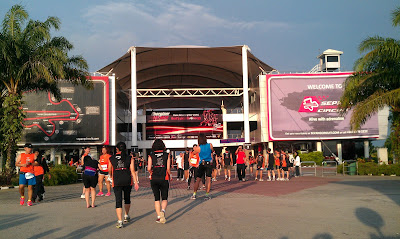 After the initial round around the main track, we headed out to the outer service roads. I more or less knew what to expect cos I was 'warned' about the inclines littered around the outer service road. Though some of them were short but killer inclines, I actually relished attacking each and every one of them. I was having such a blast running the race that every time I saw an incline, no matter how steep it was, I stepped up my pace and ran the darn things with gusto!

Call me crazy but I enjoyed the inclines. I guess my hill work training do pay dividends here :D The route was a little dark but it was a night race after all and they did give out headlights for this exact purpose so I can't really complain about illumination. I just piggy backed of the others headlights on the dark stretches.

One thing you can be assured of when Twenty First Century Sports organizes a race is the many 'motivational' volunteers that they'd have. I like the idea of the cheering volunteers who really did help with boosting your morale along the route. Every time I passed one of these 'cheer squads', my pace automatically stepped up. Nithi (race director), maybe next time you could get them to wear more skimpier clothing ... Hahaha!

After negotiating the outer service route for close to one and half laps, we headed back into the circuit for the final lap. I knew I had about 3 plus to 4km to go and I decided that it was just the right time to up pace pace for the homeward stretch. Cruised into the finish with a time of 1:26:50, which was pretty decent considering the challenging terrain and route.

From there, we were ushered to the goodie bag and medal collection which went without a hitch in under 45 seconds (including the walk from the finish line). Once again, the volunteers here were fast and efficient with the goodie bag distribution. Waited at the finish line for the wife and caught up with Kah Yen, YS (whom I'm finally meeting for the first time) and Jason.

A little off track here for a bit. Runners are a friendly lot. While I was waiting for the wife, a few of them whom I didn't know came up to me and chatted with me. That's what I like about this sport, the camaraderie among runners is simply something to smile about. With that said, it was nice meeting you Praveen, Simon and also that one guy I failed to get his name. Now if only the rest of this country can live in peace and harmony like runners, this country would be a great place to live in.

A little on the GOrun here. What? You thought I wouldn't mention the GOrun? LOL! The shoe worked out beautifully for the race. I had it on for the Brooks Half last month but couldn't really gauge its capabilities cos of the injury I suffered during that run but this time, I was running injury and pain free and in race conditions, the shoe was simply awesome. I hardly felt it on my feet and though it was a hot night, the ventilation was simply excellent. I hardly felt any heat at all during the run.

The lightness was an integral part in helping me challenge the hills. The traction of the shoe was impressive, keeping me well dug in to trudge up the steep inclines and firmly rooted on the way down without the fear of taking a tumble. Again, I stress the recovery of the shoe is excellent. Any other time, I'd be having sore calves from all those hills I had to tackle but right now as I sit here typing this post, my legs are hardly aching that I can probably go out there and run another 15k easily! It really is going to be hard putting on any other shoe these days.

One not so good thing about the shoe is normally felt after a long run. You can't really walk in them for too long. It can be quite uncomfortable and painful which was a good thing I brought along a recovery shoe. The wife didn't and had to walk barefoot back to the car (which was a long way off) after the race. I supposed that's why it's called a GOrun and not a GOwalk :D By the way, Skechers do actually have a GOwalk shoe, maybe I should ask Skechers to let me give it a try ... LOL!

With that said and done, congrats goes out to my lovely wife for trudging along the 15.5m route and completing this very challenging race. It's always nice waiting at the finish for her and seeing her run across the line with satisfaction on her face is simply priceless.

Before I go, I'd like to wish a big thank you to all the volunteers for making this run a beautiful one for us runners, without you guys working tirelessly to see us through, we probably would have suffered. So this run goes out to you guys and gals too! Good job people. I'm already looking forward to next year.