It's finally over and done with and to be downright honest, it wasn't as bad as I thought it would be :D All that worrying was actually quite needless to say the least. Crossing the finish line today is something I'll cherish for quite a long time to come.

The wife and me headed out to the city a day earlier and checked into Swiss Inn for the night. We didn't want to have to wake up really early and hunt for parking and all that so spending the night near the race location was an option for us. Besides, she was doing the half marathon and I didn't want her to have to wait for one and a half hours before her race start, since I flag off at 4.30am.

The hotel was basically populated by runners anyway and after checking in, we took the liberty to head to the race location to 'look-see, look-see' and then checked out central market and Petaling Street, we felt like tourist ... hahaha! Grabbed an early dinner and called it an early night. I couldn't really get to sleep and was more or less tossing and turning and finally dozed off around 12.30am or so, which didn't leave me much sleeping time since I had to be up by 3 am to prepare for the race.

With the wife still in bed since her flag off was much later, I took a brisk walk to the start line. Met Neoh and chatted for a bit and the KF grabbed me and told me to pace with him. He said I look so tensed, which wasn't far off the mark since I actually was tense and on the verge of hyperventilating! Being a noob amongst the many seasoned marathoners who looked so confident didn't help matters much too.

The race flagged off exactly on time and for me, it was showtime. I'd like to especially thank KF Chong for taking me under his wing and pacing with me for close to 10K. It helped calm me down a lot. At the 10K mark, I told him to go ahead and not let me slow him down cos obviously he was much faster than me and I wanted to keep to a really conservative pace being my first marathon and all.

The weather was excellent running weather with some rain along the way and I was pretty much alright with the planned pace I was on, somewhere between a steady 6:15 - 6:45 without much discomfort. I even had time to look around the still dark early morning skyline throughout the route. I was a little worried about the knee injury flaring up but thank god that didn't happen.

I managed to keep that pace and run all the way up to the 30KM mark comfortably and then the horrendous cramps hit me. To be honest, I was actually prepared to be struck by cramps seeing as how I've never run this distance before. I was waiting to see how long I could run before the cramps hit. I had a game plan for such a situation though.

I knew that I wouldn't be able to shake off the cramps completely and decided to nurse it all the way back for the final 12KM. My strategy was try to walk within a 10:00 or less pace for as long as it would take to ease the cramps and then hit a pace of 7:00 or less for as long as possible until the cramps returned.

The plan actually worked and I managed to walk/run all the way back to the finish, over-taking quite a fair bit of runners who were hobbling and also nursing cramps and cross the finish line in a time of 5:20:30, not too bad for someone attempting his first marathon :D I was emotional when I crossed the finish and breathe a huge sigh of relieve that I finally attempted my first marathon in one piece. 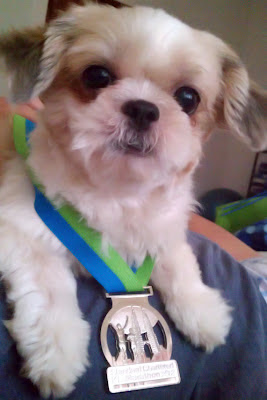 I guess a lot more training, especially more runs with a distance of longer than 30KM are to be done to condition the legs for marathon distances and avoid cramping up but I'm up to the challenge and am already looking forward to my next marathon :D It's simply addictive! Though I do have the usual post run aches, it isn't as bad as I thought it would be. I'm actually able to walk around the house normally except for a few creaks here and there ... LOL!

The race was decently organized and the water stations were spot on and more than enough with it being spread every 2KM distance apart. No complains about lack of hydration. A big thank you goes out to all the volunteers who made the run all that much more bearable for the runners with their tireless work at all the stations.

The only complain I have was that crowd control after the finish was pretty horrible with loads of runners crowding the back of the finish, unlike last year when no one was allowed into area. It was kinda chaotic trying hobble through all the people getting to the medal and finisher tee area. Something that should be looked into for next year, maybe? Overall, kudos to the organizers for a job well done. 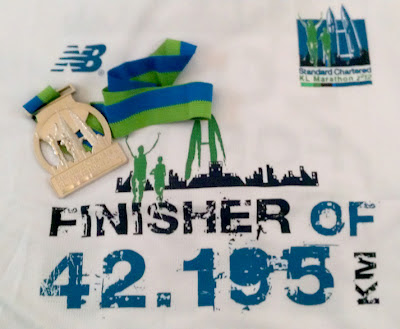 A little about the Skechers GOrun at marathon distance. The shoe worked out real well for me. I hardly felt it on my feet at all. I was a little worried about whether it would cause any discomfort during the run but it turned out otherwise and will be definitely be my race shoe for future marathons. The only sore point about the shoe was when I was on my walk sessions during the cramping period. That shoe is simply not built for walking in for too long. It was totally uncomfortable during the walks but was fine when I started running again. I suppose that's why it's called the Skechers GOrun :D I even saw a runner who was walking actually take off the pair of Skechers that he had on and walked back barefoot to the finish.

Anyways, the cramping aside, I really had a good time and enjoyed myself thoroughly during the race. I can now look forward with more confidence in tackling future marathons knowing I can only get better from this point on. To all those who ran the event, the wife included, you all did good!