The hazy days are back again but that didn't stop me from attending this morning's 7KM run event, the TM Fan run in support of the Malaysian Olympic team. I wasn't planning to run this race but did it anyway in support of Nithi, a good friend and race director for the event.

Overall, the event turned out pretty well and though I was exhausted to start with from all the printing and production work that I was involved in for the event, especially the nearly 8 hours plus setting up of the start/finish arch the day before, I actually enjoyed the run. 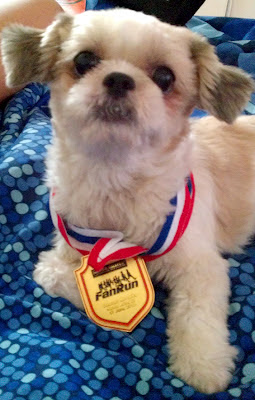 The wife sat this one out and waited for me at the finish. Met a couple of familiar faces there just before the flag off which brought us through the McDonald's run route. Though short, it still was a route to be reckoned with as it was littered with inclines.

Saw a lot of the more seasoned runners doing their last (probably) LSD session along the route getting ready for the SCKLM next week. Even saw Ray and called out to him but that superman was whizzing by so fast, he didn't see me ... LOL! 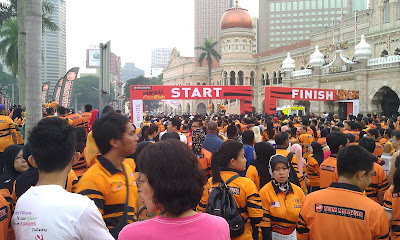 Like I told Francis in his Facebook post, God is probably a runner cos somewhere around the 5KM mark, the first signs of rain were in the air with the sounds of a huge thunderclap. By the 5.5KM mark, the skies opened up and it was pure bliss running with the rain drops pelting my face all the way to the finish. It poured and I could hardly see properly while running.

I took this as a cue to put the Skechers GOrun into rain running test mode, something which I've never had the opportunity to do prior to this. Though it was a tad bit risky cos the last kilometer was downhill and it was pouring with the road surface being slick and all, I upped the run to a 4:10 pace and sprinted to the finish. Surprisingly (and a good thing too), the GOrun stuck to the road with hardly any slippage even though the road was already beginning to look like a mini river flowing downhill. 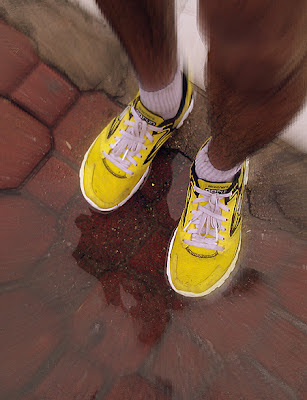 Another thing I noticed was though the shoe was soaked, it didn't have that heavy sponge like water logged feel. It was still light on the feet with the only sore point being my socks, which weren't suited for wet running conditions. It was afterall a short distanced race and I didn't expect it to rain, which prompted me to use slightly thicker socks that soaked up water more than the shoe.

At least the rain provided me the opportunity to test it in extremely wet weather and now I'm not so bothered about rain on race day which is one less thing to worry about knowing my shoe will probably hold out. I'll just opt for my other thinner more water resistant socks, just in case. The current pair of GOrun that I have has reached its limit already and will be retired as my race shoe. Good thing I have another pair of GOrun for the SCKLM which I've already been putting quite a bit of mileage on it too.

Next week will be an easy week for me, running wise with only one last, short distanced run scheduled until race day. Let's hope my work schedule will be kind to me as well.