The Putrajaya Night Marathon (PNM) is slowly but steadily approaching. I'm signed up for the full marathon, my second ever marathon and judging by the way things are going for me it doesn't look very promising.

Seeing as how this will be my second marathon attempt, I do have goals and aims this time. I intend to rectify the mistakes I made in my previous run. I've isolated what went wrong and am (or trying to anyway) taking steps to make sure I don't repeat the mistakes. I intend to definitely cross the finish in way better timing than my first marathon but somehow I'm quite skeptical about it at the moment.

I took a much deserved break for a week after the SCKLM and just as I was ready and eager to start on my training plan, I succumbed to an injury that had me seeing more missed training days. And then, just as that healed, I fell sick. At that time, I really thought the running gods were pissed with me or something. That almost three weeks saw me do some ridiculously low mileages that would have made a grown man weep!

But that's not the end of the story, once fully recovered, work decided to get in cahoots with the running gods and screw up more of my training plans. This week was actually a pretty decent week for me, running wise. The workload was low and I actually managed to follow my required mileage and both the wife and me were looking forward to a nice long run today.

But that was not about to happen. Life and family matters got in the way and saw us both having less than 3 hours of sleep the night before. She decided that she'd rather miss the run but I was adamant about getting the mileage in which in retrospect was a bad idea. Armed with less than 3 hours of sleep, cranky and in a total wrong frame of mind, I set out for a 21K run which saw me stopping after 12K and calling it quits! Lack of sleep equates to a lack of running capabilities (at least for me anyway).

To say I was disappointed at not achieving my weekend target is putting it mildly. I was pissed! I was fuming! I was cursing and coaxing the legs to keep going! I promised it a new pair of shoes. I promised it a good massage. I promised it a makeover but it just refused to cooperate. In the end, I just decided that it would be pointless from that point on to keep going and end up with useless junk miles, so I dejectedly walked (yes, walked) home and called it a day.

With setbacks like these, I'm seriously worried and doubtful about how I'm going to cope with the PNM in October. While it might look like October is still a ways off, in reality it's just around the corner, with the way time flies these days. I'm hoping to seriously be able to keep to my required training plans from next week onwards and put in the required mileage with the MUST DO long runs on weekends thrown in.

I guess I'll just have to intensify my efforts and see how I'm able to successfully juggle life, family and work around my training. I'm looking forward to the Craze Ultra 100 miles early September cos it'll give me the chance to put in some heavy mileage and have the support of fellow runners to spur me on.

Oh by the way, I'm not actually doing 100 miles like Ray and the rest of those running machines, that would be insane ... LOL! I'm going to start with the second batch of runners and do about 3 loops, the equivalent of 30K or so. Hopefully there will at least be some sane runners doing shorter loops whom I could latch on to for company.

With that said and done, I haven't exactly been idle during the numerous days when I couldn't run. The wife has helped me work up a core strengthening training plan and with her guidance and coaching, I've been religiously slogging through it almost every day. She surmised that if I wasn't going to be able to run, I might as well work out and build up my core. It was seriously tough the first week but now I'm actually enjoying it and one 30 minute session makes me sweat more than I would in a 5K run!

It's been nearly three plus weeks since I've been on the plan and I'm gradually increasing the duration of each session and actually do feel some results already which I'm pretty happy with. Besides I do have one tough and no-nonsense 'coach' who gets a thrill at seeing me suffer ... LOL! Here's hoping a tougher and stronger core will see me doing better runs.

Now to catch a couple of hours shut eye before planting myself in the sofa later to watch the Olympics marathon and catch my idol Meb run. GO Meb! 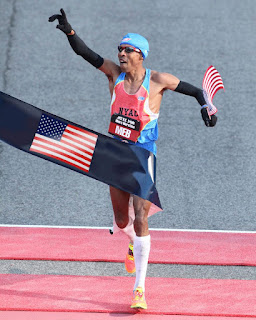