Skechers, From Strength To Strength

What do Britney Spears, Christina Aguilera, Kim Kardashian, Robert Downey Jr. and  Matt Dillon have in common? They've all at some point of time endorsed the Skechers brand of shoes.

Skechers was founded in 1992 by Robert Greenberg, a retail industry veteran who created the women's athletic brand L.A. Gear in 1983. His career involved selling wigs to beauty vendors, importing designer jeans for retail markets and also owning his own roller skates stores.

Greenberg initially intended to use the Skechers brand to distribute the British made Dr. Martens shoes but after a dispute between them in 1993, Skechers went on its own and relied on its own designs for success. By 1997, they began selling their shoes overseas to southeast Asia and eastern Europe and by 1998, 15% of their profits came from the overseas market.

The original goal of Skechers was to provide men with casual nonathletic shoes. Nike was during that time the dominant maker of men's shoes but it didn't offer very much street shoes. The first successful design by Skechers was called the 'Chrome Dome' and debuted in 1993 which appealed to both men and women. The shoe, inspired by the grunge fashion trend back in the 1990's was made to look worn and scuffed somewhat like the pre-ripped and stone-washed jeans of the time.

My involvement with the Skechers brand of shoes, more significantly the running series of the shoe started close to a year ago. Back then, I would make a wide berth around the Skechers outlets and if you mentioned Skechers to me as a running shoe, I would sneer at you, which is exactly what I did when the wife decided to one day walk into a Skechers outlet and buy herself a pair of Skechers Shape Ups.

I honestly tried to discourage her from buying the shoe. Even though the newer release was so much less bulkier than the original one that Kim Kardashian used to endorse, it still looked like a brick to me. But she persisted and surprisingly enough for her, she loved the shoe. Okay, whatever, I said. If you're happy I'm happy but you wouldn't catch me dead in a Skechers.

Little did I know how those words would come back to haunt me. The wife was still doing research on the Skechers brand and told me about a new 'real' running shoe they were launching called the GOrun. After seeing the Shape Ups, I wasn't holding my breath too much. The day the shoe was launched in the stores here, I happened to pass by the KLCC outlet and saw it on display.

Visually it took my breath away. Picking it up, I almost stopped breathing at the lightness of the shoe. I had to walk out the shop and look at the signage to be certain I was in the right shop. I mean, heck, how could Skechers, who came up with something like the Shape Ups (no disrespect to the shoe) actually make something as stunning as the GOrun.

I called the wife and told her I was coming to pick her up and we were DEFINITELY going to purchase the shoe right away. To cut a long story short, I ate my own words about the brand and have since then come to love the Skechers brand, albeit the running side of it and have never looked back.

The Skechers brand has come a long way worldwide and especially in this country. From a time where the general perception of the brand was, 'Skechers? Running? Seriously?' to the numerous pairs of running shoes I've seen on people's feet during races speaks volumes how successful the brand is becoming. It's heartwarming when someone comes up to you during a race or even in the parks during training and asks if it's a Skechers I have on and how it performs.

The success of the brand is all due to the excellent marketing and PR that's being done. I thought they made a great move in signing up Meb Keflezighi after he was dropped by Nike to endorse the brand. His success in the US Olympic trials and his excellent performance in the recent Olympics, even though coming in fourth gave the Skechers brand a significant boost in the running shoe industry.

A lot more people were beginning to get curious about the Skechers GOseries. People were sitting up and beginning to take notice. Here was a shoe that was being endorsed by an Olympian. Of course, it helped a lot that the shoe was pretty good to begin with.

The marketing team at Skechers Malaysia has also done a tremendous job in seeing the brand get a bigger share of the running industry. The steps and strategies they've taken to create awareness for the shoe such as being a sponsor for the Shape Men's Health run event, the weekend Running Workshop at the Lake Gardens and the Indoor Training Workshops has been bearing fruit.

Their willingness to also provide shoes for wear testing to the likes of local marathoner/shoe guru Jamie Pang, fellow marathoner/trail expert Yvonne Teo and ultra-marathoner/triathlete Tristupe for feedback on their series of running shoes has had a huge impact in the gaining popularity of the brand in the running circle.

By also taking a page off Skechers USA when they signed up Meb to endorse the brand globally, Skechers Malaysia signed up a few well known race winners namely Sheela Samivellu to represent the brand locally. With Sheela's race winning abilities, the brand is almost always seen on the podium as a race winner.

But no matter how good a brand portrays itself to be, if the product is inferior, then no matter how much is put into a branding and awareness campaign just won't work. Fortunately for Skechers, they make a good pair of running shoes that places them right along the more well known and seasoned running brands out there.

Right from their very first pair, the Skechers GOrun right up to their latest (the latest that I have anyway), The GOrun 2, it's all been a very positive experience for me. Judging by the feedback and responses I've got from numerous others who have been running with the shoe, it's also been more positives than negatives. Like I mentioned earlier, I'm seeing a lot more Skechers running shoes on the feet of runners than I did almost a year ago which is good for the brand. 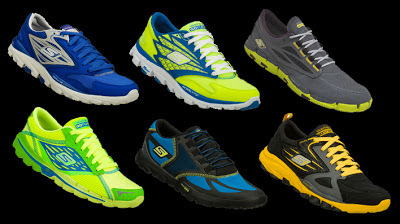 After a quick check with Adeline of Skechers Malaysia, I found out that the original GOrun is still the top selling shoe in Malaysia. A little surprising though cos I thought the GOrun Ride would have topped it. But it's good to note that more and more people are actually taking to the brand.

I've loved every single iteration of the GOseries that I've tested and used. Both the wife and me have tried and tested every model under the running range from the Skechers GOrun, GOrun Ride, GOrun Ride Ultra (basically the same shoe as the GOrun Ride), GObionic, GOtrail, GOrun 2 though she's also tested out the GOtrain, an all weather GOrun and urmmm, the Shape Ups. We even have the GOwalk. She likes the brand so much that she even went out and bought a casual Skechers sandals for herself.

Personally, the shoe works for me. Some may say that it's not the shoe that makes a better runner but to me, finding the right shoe contributes highly to way you run. I used to be a heel striker but with Skechers mid foot strike technology, it's 'forced' me to change the way I run to a more midfoot/forefoot strike and it has benefited me tremendously to run more efficiently though I still do heel strike every so often when I'm dead tired. Old habits die hard.

As a brand, Skechers have seriously come a very long way and moved on from strength to strength since the launch of their very first GOrun running shoe way back in March last year. With a slew of new models slated for release in the coming months, I can only foresee that the brand will (if not already) be giving the more established brands out there a run for their money. 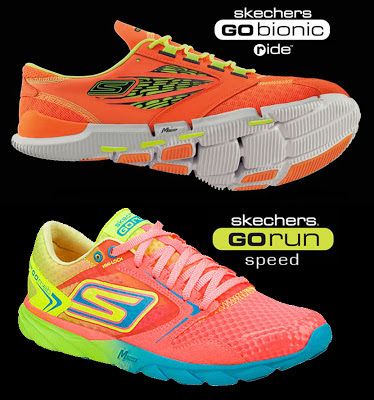