The soreness and aches that I'm feeling in my calves and quads right now are a sure sign that my weekend was filled with loads of running. Although I'm walking up and down the office stairs like a lil old lady, I'm kinda happy with the aches (Nick, you're a freaking sadistic nut!) cos it's a sure sign the right muscles got worked out. As long as they're aches and not injuries, I can live with it.

My weekend was a fun filled session of running that started on Saturday morning with the wife at the usual Bukit Aman/Lake Gardens/Padang Merbuk location where a whole bunch of equally insane people would congregate at such ungodly hours just to run.

With the construction going on at the Bukit Aman car park, Lake Gardens these days gets a little too crowded if you end up reaching there late so the wife and me opted to park at Padang Merbuk and start our session there. What we didn't know was that Brunsfield was having their 23rd Marathon run consisting of an 11k race and yes, they actually printed 23rd 'Marathon' run on their official race tees.

We took the reverse of the double hills route since she was just doing a slow easy run and I was her designated pacer for the day. The reverse is a much more bearable route but still pretty tough nonetheless. The run was pretty much fun with the two of us chatting and glancing envious eyes on all those huge houses along the Bukit Tunku route. When will a million bucks drop from the sky so we can live in mansions like that? Sigghhh ...

Met a lot of runners doing the tougher and proper direction of the route, unlike us softies that were doing the reverse. Actually come to think of it, I think only the wife and me were doing the reverse of the double hills. It was a pretty straight forward run with one little drama when we came to a fork in the road and I forgot which direction was the right one.

Good thing I spotted some runners on the opposite side and managed not to get lost. The wife was giving me  this 'I thought you run here all the time look' by then ... LOL! The rest of the run went along pretty much routine. The wife was exhausted by the time we got back to Padang Merbuk but she was totally thrilled with her run and so was I.

The menu for the next day saw the GCAM group (well, at least 6 of us anyway) meet up the Forest Research Institute of Malaysia (FRIM) under the guidance of Yvonne to trek into the jungles of Malaysia. Okay, I know it's not a jungle but heck, it sounded much more dramatic that way ... hahaha!

I was actually looking forward to this trail run cos I get the chance to run in my Skechers GOtrail again, which so far has only been used for three times including the current run. Yvonne gave me a heads up to be on the lookout for leeches the day before which was a good thing cos I have an aversion to leeches and it rained the night before which meant those blood suckers would be out by the dozens.

So I put on my 'anti-leech protection gear' which was really just putting on my calf compression and hoping they don't find their way in and feast on my blood. Reached FRIM bright and early around 6.45am and waited for the gang to arrive. Once we all got together, it was time to head off.

This had to be one of the most fun trails runs I've been to (this is my second trail run so it's not much of a benchmark) in a while. It was mostly laughing and joking all the way up that I hardly noticed the pain involved in the run. I've only known this group for a very short while yet with the joking and clowning around we had, it felt like we've been friends for ages. Running does bring people together.

The run this time was much more bearable for me since I more or less know the route this time around. Interestingly enough, I was vocal about avoiding the Pacat Trail and somehow unknowingly made Yvonne lead us right up that exact trail.

'Aiks, I thought we were supposed to avoid the Pacat Trail' I said to Yvonne.

'But you asked to go up this route, what!' replied Yvonne.

Ok, the next time I make silly recommendations, someone please smack me on the head! LOL!

After a quick photo op, the Pacat trail was done at breakneck speeds to get through, not giving those bloodsuckers time to latch on. Thank god the route was downhill and the GOtrail was nice and grippy cos there were times I think I was almost careening off the trail.

After checking my data at home later, this short stretch saw me doing a 5:00 pace! Fear helps with speed ... LOL! The good part is we all came away unscathed through this trail. But at the end of the day, I still wasn't spared by them leeches. Found one bugger trying to sneak between my sock and shoe and another fat bugger after the run which was happily dozing away on my ankle from all that blood he sucked in! But Kew takes the cake with a total of 5 leeches clinging on to him. He must have royal and awfully sweet tasting blood.

The run wasn't without its drama. Towards the end of the run, I received a call from Jamie saying that Yvonne needs help with CY whose body was freezing up (those were the exact words from Jamie). Fearing the worse, I instantly called out to the guys and relayed the news about the emergency. Off we went like the emergency response team we pretended we were to head up that blasted incline again.

Now, the mind was ever ready to race up that incline to lend a helping hand to our fellow runner in need but trying to tell the legs to actually run up was an entirely different thing altogether. For me personally, I think I only managed a maximum of 100 - 150 metres and then walked up as fast as I could. Kew reached both CY and Yvonne first followed by the rest of us one by one.

Though totally exhausted, we were glad to see that CY was okay and was just basically down with exhaustion though he and Yvonne still had the energy to laugh at our trek up to 'rescue' them. I think I was on the verge of needing rescuing myself by then! One thing was for sure, we sucked at being an emergency response team cos it took us ages to reach them.

After making sure CY was okay, we all took a breather and slowly made our way down the trails to the car park. On the way down, we all agreed that it would be good if we could all get some kind of emergency training to cater for such incidences in the future.

Thankfully, this time it was more about exhaustion than anything serious. As runners on the roads and trails, we're constantly almost always way off the more populated paths and having some form of emergency training would come in real handy when spotting a fellow runner in need. Something to think about, ya?

After making sure everyone was okay, Kew, Keng Piew, Foo and Kian Hor headed off back towards the car park while Yvonne and me kept CY company all the way down which in reality was the perfect excuse we needed to walk back to the car ... hahaha!

Aside from that 'emergency', the rest of the run was basically a fun outing with lots of jokes, teasing and laughing and of course not missing the chance to talk about our coach, Jamie behind his back... hahaha! Don't worry Jamie, it was all good things we were saying about you.

My weekend ended with a final run later in the evening to pace the wife again. She's finally beginning to follow a training plan and I'm doing my part to make sure she's motivated enough to keep to it which is why I try my best to run with her even though I'm in the midst of my own training.

I know how mentally challenging it is to run on your own, with the thought of quitting always on the forefront on your mind. Having company to run with makes the session all that much easier to do. She's started loving her runs again and keeping pace with her gives her the motivation to keep on running without wanting to give up. I don't mind sacrificing a part of my training plan to help her with this. Besides, we get the chance to chat about everything under the weather doing something we both love. What more could I ask for? 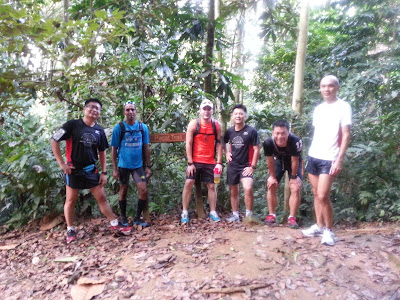