Go With The Flow

Training for my SCKLM marathon in June has been going along just fine, at least until this week, that is. The entire week's scheduled training plans went down the drain after I succumbed to the effects of the flu, fever, sore throat and cough, all rolled into one.

I already felt the signs of illness late last week and was doing everything I could to ward it off but obviously I lost. The good thing is at least I've gone through the worst of it already and am on the road to recovery. Unfortunately though, now the wife has contracted my illness and it has put a spanner in the works for her training plan, which was also going along just nicely.

Oh well, I suppose there are some things in life you just can't avoid no matter how hard you try. We just have to ride it out and go with the flow. Besides, I did factor in falling sick at least once during my training programme but wasn't expecting it to be just when I moved into the harder phase of the programme.

I've structure my marathon training plan based on the Hanson's method and have been following it closely for the past 6 weeks. I've been wanting to find a plan that suited me best after numerous failed attempts at various other plans I found online. After hearing so much about the Hansons Marathon Method, I ordered the book online and upon reading it was convinced that it was 'the' plan for me.

Now here was a plan that didn't tax my body and abilities as severely as the previous plans I was on. Here was a plan that actually had me running slower to go faster. Most importantly, here was a plan that I could actually stick with. Initially I was torn between choosing from the beginners or the advanced plan with both ultimately achieving the same end results which is to run your fastest marathon.

In the end I came to a conclusion (rightly so!) that I really wasn't anywhere near an advanced staged marathon runner and hence chose the beginners training plan which saw me having five easy running weeks before the tough parts starts. The start of the sixth week saw intervals, tempo and strength sessions being included into the equation. Surprisingly I was coping with it nicely, even with only one rest day midweek. Then I get struck down by illness ... siggghhh!

The entire concept of the Hansons training plan revolves around the premise of cumulative fatigue. Most training plans focuses primarily on the long run. But with the Hansons cumulative fatigue method, runners go into the long run slightly fatigued from the training of the previous days. There really isn't a single session that is overly difficult yet every session is tough enough that there isn't a full recovery between all the sessions. The idea of going into the long run fatigued is to mimic the later stages of the marathon when the legs are no longer fresh. At least that's the idea anyway.

But what I like about the Hansons plan is that it keeps me injury free. I don't punish myself during training as I used to and was perpetually having down times due to various injuries. I had this distorted thinking that if I ran slower, I would lose all the speed I had but a marathon isn't how fast you run, it's how long you're able to run effortlessly (or as close to effortlessly as possible), which was why the first week of the training was difficult for me.

I had to curtail my usual enthusiasm for wanting to run fast and keep to a much, much slower pace than what I was accustomed to. I had to consciously keep an eye on my Garmin to make sure I wasn't speeding up. After a week, things settled down and I got into a nice groove of easy running. I felt totally rejuvenated again. The sessions were enjoyable, no pains, no aches, no injuries, simply blissful running and when I need to ramp up the pace, I found that I could do it easily without losing any of my previous speed. Heck, I felt alive!

What made the training more meaningful was that the wife finally decided to start a training programme of her own. To make it fun for her and to make sure she kept to her plan, we went out for our runs together. Because we're on a totally different training plan and pace settings, I plotted out a route that would have me tailing her and making loops around the neighbourhood to keep her in sight. 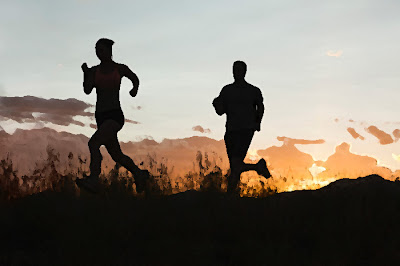 She'd never be more than 300-400 meters away from me as I looped around the block and then join her for a short chit-chat before looping around another block of houses. We were in a way 'running' together. On my rest days I would simply just be her pacer. It was a fun arrangement which I'm now trying to see how to keep going since I've moved into a tougher training period.

I'm hoping that nothing else will pop into the picture to disrupt my training plans though I'm prepared for it if it does. No matter how much you can try to plan for something, the unexpected always tend to spoil things. The coming SCKLM in June will only be my third marathon, at least I'm not stepping into it unprepared this time. Running a marathon is far from fun. If someone tells me running 42.195 km is fun, I'll smack you silly. For me, taking part in one is fun but running it is hell! Well, unless you're an ultra-marathoner la, then you eat marathons for breakfast ... LOL!

Even though I'll be (probably) prepared for it, I know it'll be far from easy. I know every step is going to be an effort on my part but at the end of the day, all the work I put in and the joy of finally crossing the finish will make all the pain worthwhile. I don't have lofty goals. My aim is to break into the sub-5 hour timing this time round and improve myself little by little in every subsequent marathon after that.

I've limited myself to only a maximum of 3 marathons this year with two already identified and still in search of a third one. I need to keep them spaced out so that I can still put in the proper amount of recovery and training time for each marathon I take part in. I've opted out of a lot of shorter distanced races save one or two to concentrate more on training to achieve my dreams of being a better marathoner. At my age, I've got to be a lot more pickier with my plans.

With that said and done, I'm hoping I can squeeze in a short run later today seeing as how the worse of my illness is over save for the incessant coughing and get back on track with my training proper next week. There is one race in May though, that I'm kinda looking forward to which is the Deuter Trail Fun Run, a 7km trail run in Putrajaya. This will be my first foray into the world of trail racing and I'm kinda excited about it :D