Marathon training can be mentally challenging and oftentimes pretty boring what with having to keep to a training plan day in and day out. But my marathon training took a turn for the better four days ago when I got my hands or rather feet on the all new Skechers GObionic Ride.

I'm a huge fan of the GObionic itself and use it for most of the races I take part in. I've even used it for a full marathon and achieved a personal best in them. So getting a text from Skechers Malaysia telling me that my pair of GObionic Ride was ready to be collected had me dropping everything in the office and rushing over to pick them up ... LOL! I'm excitable in that way.

I don't normally write too much about a new pair of shoes until I log some mileage in them. But heck, after a measly 20K plus in them, I'm ready to wax lyrical about them already. The wife also put on my shoe for a run today and was utterly impressed with them, albeit it being a little too big for her. Those two or three people who follow this blog would know of my fondness for the Skechers brand of running shoes. Some would even say I'm a 'salesman' for them ... LOL ... but seriously I'm already in love with the GObionic Ride. 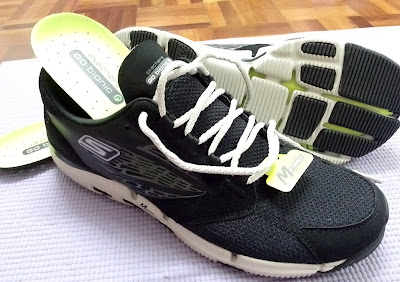 The Skechers GObionic Ride (which I'm going to shorten as the GBR from this point on) is basically an extension of the original shoe but with increased cushioning in the midsole area and a 4mm heel drop compared to the zero drop of the original. The GBR combines the segmented and responsive sole design of the GObionic for a more cushioned ride.

Taking it out of the box, the shoe still felt light though I could feel a slight increase in the bulk of the shoe, which is to be expected seeing as how it's more cushioned. Constructed with the same ultra lightweight synthetic and mesh fabric upper with a lightly padded collar and proprietary lightweight injection molded Resalyte™ midsole, the shoe weighs in at 7.5oz for the men's size 9. It has a removable 1.7mm insole and comes with the same round lacing style of the original.

There's a a lot more mesh area in the upper compared to the original which is supposed to offer a precise fit. I was a little worried about the fit though cos upon putting it on, it was at least a half size too big compared to my usual size 8 of the original which prompted me to use thicker socks for my inaugural run with the shoe. My fears were totally unfounded cos with the narrower fit of the shoe, it held my feet in place with hardly any slippage. Being a half size too big, I reckon running sockless with it might pose some issues, not that I intend to find out. I'm totally NOT a sockless runner.

I'm a person who loves flashy coloured shoes and somehow have problems, heat wise when running in black themed shoes (could be a mind thing) but surprisingly the shoe was very breathable even with the thicker socks I had on. It had a wide enough toe box for proper toe splaying and just the right amount of cushioning but still enough road feel even with the insoles on. I'm suspecting that I'll get a lot more road feel without the insoles which I'll be taking off for my next session.

Speaking of the removable insoles, the insoles of the GBR differs considerably from the GObionic. The GBR's insoles have small tiny 'ventilation' like holes while the GObionic is more of a one piece kind. The bottom of the insole is slightly grooved which I suspect will hold the insoles in place snugly unlike the GOrun 2's insole which I heard had some slipping issues. In my runs in them, they didn't move an inch. The wife ran without the insoles and had no issues too though she said that she felt the surface of the roads and pebbles just like the GObionic. 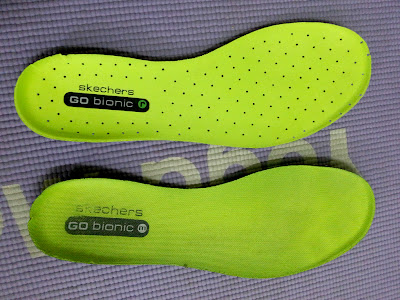 Now comes the part that I loved about the original GObionic which is also found in the GObionic Ride - the 18 articulated bio-responsive Resalyte™ cushioning zones of the outsole. They provide great flexibility, feel and ground conformity for a more natural foot movement. Ever since transitioning to a more minimalist style of running, I love the feel of the ground pounding my soles. Total barefoot running is not for me though and the closest I would get to actually going barefoot was running in the GObionic.

These 18 individual articulated Resalyte™ outsoles gave my feet a very natural feel when running and conformed to every indentation or bump on the road which gave me a much more natural stride. I loved them but they could be hard on the calves if used extensively for training which is why I rotate between the GOrun Ride and the GOrun 2 (and occasionally, the original GOrun) for my training runs. I reserved the GObionic mainly for races.

Now the GObionic Ride maintains these very same articulated bio-responsive soles but with more cushioning added to it making it the perfect training shoe for someone who loves the GObionic but wants something a little easier on the feet during training runs. It has just the right amount of protection without compromising the responsiveness of the shoe, mimicking that barefoot feel of the GObionic that you can use it daily without it being too hard on the calves.

The outsoles still maintain the grid like styling of the original with the difference being the rubber plugs of the GBR has been increased and placed at more strategic parts of the sole, which I thought was a good move. The durability of the outsole in general though seems a little suspect to me cos I scuffed mine quite badly on only my second outing with it.

In a nutshell, if you asked me what the difference between the Skechers GObionic and the Skechers GObionic Ride are, I would have to say that while the GObionic is a true zero drop barefoot mimicking running shoe with excellent flexibility and responsiveness, the GObionic Ride on the other hand is a more cushioned 4mm drop running shoe that still offers the same excellent flexibility and responsiveness of the original but with an increased midfoot shock absorbing Resalyte™ sole.

I'll know more of how the shoes performs in the coming months after I take it out for more mileage and maybe even put it through the test of taking part in a few short distance races, if I can find something that complements my training plans. But from my few initial runs in them, it looks like a positive bet the shoe will work well for me.

A word of advise though. Just like any other minimalist shoe, go easy on them if you've never run in a minimalist shoe before. Don't rush into them and expect them to work miracles for you cos no shoe works that way. No matter how good someone says a shoe is, you've still got to ease into them cos everyone of us have totally different running styles and are built differently. What works for someone might not work for you.

That said and done, I'm totally smitten with the shoe and will definitely include the Skechers GObionic Ride into my rotation of training shoes with probably more preferential treatment given to it. I'm not exactly sure when the actual release of the shoe will happen over here but judging by the teaser in the Skechers Malaysia Facebook page, it's probably happening soon.

Update:
Ran without the insoles today and true to what I suspected, there was a lot more road feel. Unfortunately I also felt the grids of the outsole which kinda bothered me during the run and actually left indentations of the grid inside the shoe. Looks like I'm going to keep the insoles on during my runs.