Hi, my name is Nick and I'm a trail junkie! There, I've bravely admitted it! I've become hopelessly hooked on trail running and even have seriously insane thoughts on tackling ultra running. My head has been filled with such wildly atrocious thoughts for quite a while now. I've been trying to suppress those thoughts but it's a losing battle. 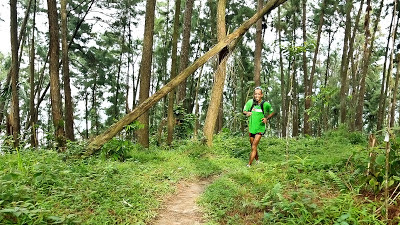 I've been doing quite a bit of research about trail and ultra running and have been dragging my poor wife all over town looking for gear. I stress the word looking here cos trail gear is exorbitantly priced. At least the brand I'm looking at is anyway. I've slowly been working up a small, a really, really small collection of trail gear and even got the wife to actually buy something too.

Well, I actually wanted the gear but convinced the wife to buy it so it wouldn't seem like I was desperate enough to buy stuff. With that, let me introduce to you the Salomon Lab Sense Hydro Set Hand Hydration System. This collaboration between Salomon and Hydrapak is based on Hydrapak's soft flask technology with a glove designed by Salomon to hold the soft flask in your hand producing a highly functional handheld hydration solution. 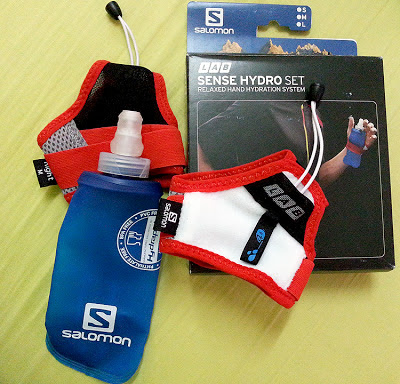 It's a very simple design system that utilizes a pair of gloves which slips over the fingers and thumb. The palm side of the glove holds two elastic bands and is comprised of a highly breathable (still uncertain about this) mesh fabric. The elastic bands hold the Hydrapak soft flask in place while running. The flask is further secured by an adjustable bungee loop to hold the bite-valve in place, keeping it upright for easy consumption of liquids.

The back of the glove has a terry cloth like fabric that is apparently used for wiping the sweat of your brows and face though if that were the case, they could have made it some other color besides white. I found the gloves to be comfortable and fit snugly over the palm.

The soft flasks are easily (after a few tries) inserted under the elastic bands and are quickly adjusted to your preferred position of where you would like the flasks to be during your runs. Due to the design of the glove, the flasks themselves are easily handled. The Hydrapak soft flask has a nice soft form fitting like feel to it. The flask is made of PVC and BPA free material and has a very simple and efficient bite-valve on top and functions simply by biting (duh!) and squeezing the flask gently. The bite-valve design eliminates the need to pull up the valve or mess around with it while running, keeping things simple.

The soft flask released by Salomon comes in three various sizing capacities, 5oz (148ml), 8oz (237ml) and 17oz (500ml). The Salomon Lab Sense Hydro Set Hand Hydration System though comes with one 8oz soft flask and two gloves which if you ask me is rather silly. For that price I would have expected two flasks with it. I had to buy another extra flask to avoid having to share with the wife. It's a good thing I got the unit for 20% off, cos it was on sale for 10% off and an additional World of Sports member discount of 10%  made it a little less painful on the wallet.

The wife and me took it out for a short trial run with her taking the left glove and me the right one. The glove fit snugly and was pretty comfortable though I thought it wasn't as breathable as it was touted to be with the flask attached to the palms. The wife thought otherwise though. I was a little skeptical about the capacity of the bladder and at 8oz, it didn't seem like much but for a short simple run around the neighbourhood, it actually sufficed. Didn't need to stop at the petrol station to buy drinks. I actually drank too much and ended up without water halfway through the run, a little too kiasu ... hahaha! 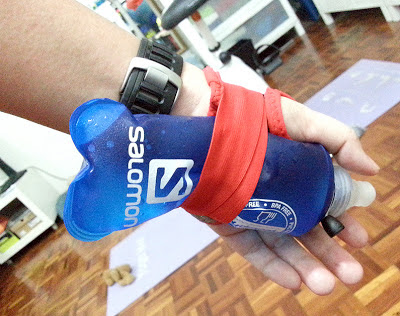 While I was conscious of the flask in my palm while running, the entire contraption wasn't really bothersome. Drinking on the run was as easy as biting on the valve and the hand didn't get tired of having to actually grip a normal bottle. The only downside was the chilled water in the flask got warm really fast due to the heat from the palm but I guess that was to be expected. One good thing is there was no sloshing of liquid as you ran and the flask collapses on itself as it empties and you can even stuff it in your shorts pocket if you want to.

Overall I thought Salomon Lab Sense Hydro Set Hand Hydration System is a pretty good option if you're one of those, like the wife who carries her water bottle with her during her runs. You have a  nice amount of water for a training run or even a race and the flask are easily topped up though you need to fumble with them a little to put them back on but with a little practice, it gets easier.

As for me though, I only convinced the wife to get the unit cos I just wanted the soft flask as an additional water storage for my hydration vest as I'm not the kind who likes to really hold on to a water bottle. But it's a good option for my training runs around the neighbourhood though.

Pros
Light and compact
Comfortably designed with a relaxed and natural hand grip
Bite-valve for fuss free access to fluids
Good for short runs
A viable option for those who dislike traditional handheld bottles.

Cons
Not as simple as it's made out to remove and replace the soft flask.
Gloves do get partially warm in spite of the breathable mesh fabric design
The color scheme tends to get dirty easily
Price a little too steep with only one flask provided. 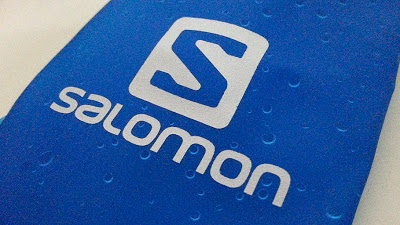 The Salomon Lab Sense Hydro Set Hand Hydration System is priced at RM159.00 for a pair of gloves with a soft flask. An additional flask will set you back an extra RM69.00 for the 8oz capacity and can be found at most World of Sports outlets.