The Standard Chartered KL Marathon is barely a week away and surprisingly I don't have the pre-marathon jitters this time around. That's not to say that I'm being cocky and showing the marathon no respect. Far from it, I have the utmost respect for the distance and I know the hardship I'm going to face come race day. It's just that this time around, I've thoroughly trained as best as I can for it and come what may, I know I would have given my all when I cross that finish line. 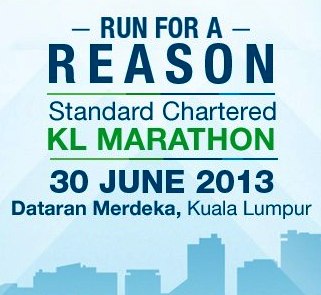 Unfortunately though, with the current haze happening right now I might not get the chance to put all that training to the test. I'll be assessing the conditions of the air quality for the next three days and by the end of the week, if the haze is still as bad as today and the organizers don't postpone the race, I'm pulling out of the race. I'd rather be healthy and live to run another day. Can you imagine, breathing in lungs full of that smoke for the entire 42km distance?

If I were the organizers, I'd keep an eye on the conditions (which I'm sure they are) for the next three days and make a decision on a postponement before the production and set up work starts cos then more money would have been spent and committed and there would be no turning back, well, at least I don't think they would. People would complain if it was postponed and people would also complain if it went on. A no win situation either way for the organizers but let's hope a little common sense prevails here. It's not just about the runners, it's also about the hundreds of volunteers who would have to endure the smog in support of the runners.

Anyways, that's my two cents on the issue and if I run it, this would only be my third marathon. I know, it's a measly number compared to a lot of you but I'm not the kind who would just jump into something without really training and being prepared for it. It took me close to two years before I decided I would be ready enough to attempt my first which coincidentally was at the SCKLM last year.

No expectations were set, my goal then was to just cross the finish in one piece. I had no proper structured training plan back then. It was something I just took off internet, modified it along the way and hoped for the best. While it was awesome to finally fulfill my dream of running a marathon, I can't say that it came easy. It was a painful experience, fatigue and cramps coupled with the wrong training were the biggest culprits.

Throughout the year leading up to this marathon, I suffered countless injuries, most of them self inflicted, the results of being too naive and cocky at times. Trying to do things that simply were above and beyond my capabilities. The turning point came when I suffered a patella meniscus tear way back in early January. Having to lay off running for a month put the fear of god in me.

I took a step back, contemplated on things and decided that I've got to be more practical. I've got to structure things around what my body is capable of doing if I were to keep on with this thing called running. That one month gave me enough time to get in some soul searching, do some reading and research on how to run smart and understand what my body is capable of doing.

This time round, with the right training programme and sticking with it religiously, I've managed to stay injury free (touchwood!) and am in a much better shape than I was six months ago. I'm running better, consistently and much more efficiently than before. What's more important is I'm running smarter than before. No more trying to keep up with the 'big boys' anymore. No more crazy thoughts the likes of 'I've got to run faster and keep up with them'.

The realization that a marathon is not about speed (I never said I was intelligent) finally sunk in. If I wanted speed, I'd train to be a sprinter. A marathon is all about endurance and lasting the distance. The speed part comes naturally once you ace the endurance aspect of things. The wife kept reminding me of that too. She's the wise one in the family.

It was difficult initially cos I was always one who wanted to run fast. For me, speed was everything. My previous training plans were always fast, faster and even faster, hence the numerous injuries and lack of improvement. It frustrated me no end that I wasn't getting any better. The change of mindset and training programme did wonders to my form and confidence. One of the important things I learned from it was 'to run fast, you've got to first run slow'. It's something I kept reciting over and over again every time the need to run fast cropped up. There was a time and place for speed.

To cut a long story short, I'm in a much better position this time round to tackle that 42kms of road. I'm not expecting it to be a piece of cake. I know it's still going to be one painful step at a time but at least I know I've done all I can to make those steps a wee bit easier.

It didn't come without a cost though. Sidelining the wife every so often just to get in the training required, no social life whatsoever, no family outings, juggling work, too tired by the end of the day to do anything but sleep were some of the consequences I had to face. I'm thankful that I have a wife who at times reminded me of the neglect but as a runner herself was understanding nonetheless :D

I'll be one happy camper when I finally cross that finish line next week, weather willing. I'll definitely breathe a HUGE sigh of relief. Hopefully I'll get through it without any incidents. I do have a goal this time round. Nothing fancy but a goal nonetheless. I know some of you have bets on what time I'm going to finish but I'll bet you all lose cos I'm not that fast ... hahaha! A humble sub 5 is all I'm looking at and I'd gladly take 4:59:59 anytime :D

See you all there at the start!