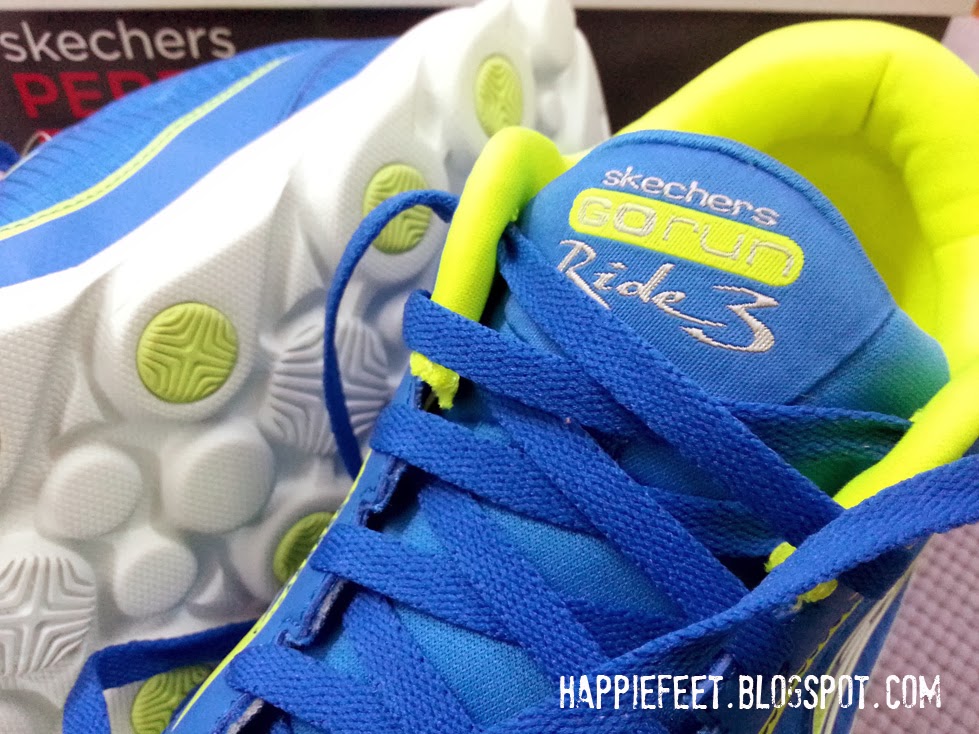 I first set my eyes on these pair of gorgeous babies during the GCAM group's Chinese New Year run in Putrajaya back in January. Choon Yuen brought a pair in from overseas and I was drooling at the sight of it. I've had my pair of the GRR3 for close to two weeks and hadn't really had the time to take it for some runs due to preparations for the TITI ultra.

I've been running in them quite a bit since then and I've been loving every minute of it. Between the three iterations of the GOrun Ride's, this has to be the most comfortable of the series. The new redesigned upper is constructed with a 4 way stretch mesh on the front and side panels with added overlays to provide ample support without adding too much weight to the shoe. 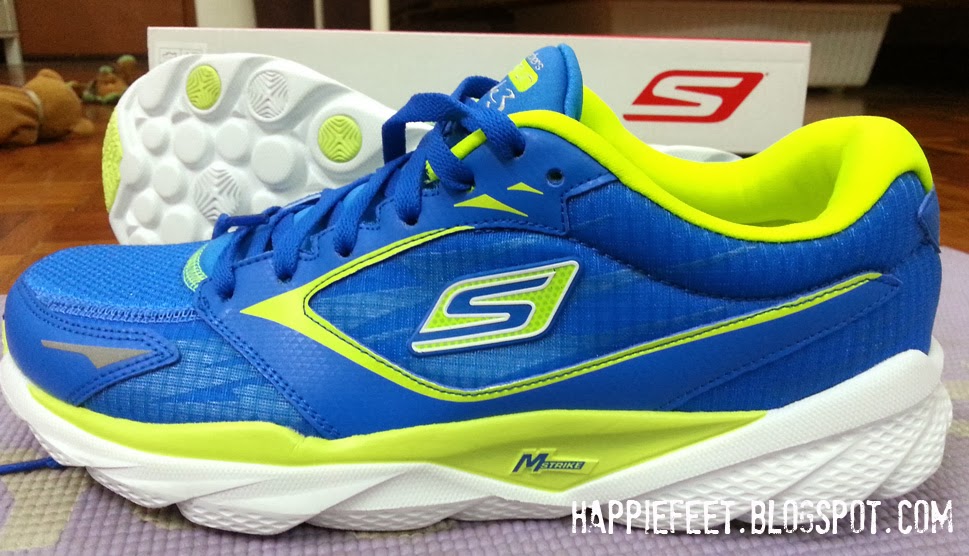 The fit was spot on and I didn't have to go a size up like the GOrun Ultra. The upper provided snug lateral and medial support and though the GRR3 looks like a 'hot' shoe, it's actually very breathable and with cushioning that is simply sublime!

With a nice wide toebox and an almost seamless interior, the GRR3 felt real comfy on my feet during my runs in them. It hugged my feet without any slippage and even with slight foot expansion in my shorter runs in them, it still felt pretty darn comfortable. I'm not a sockless runner but I'm sure it'll feel just as comfy to run without socks as well. Oh, did I mention just how cushioned they are? 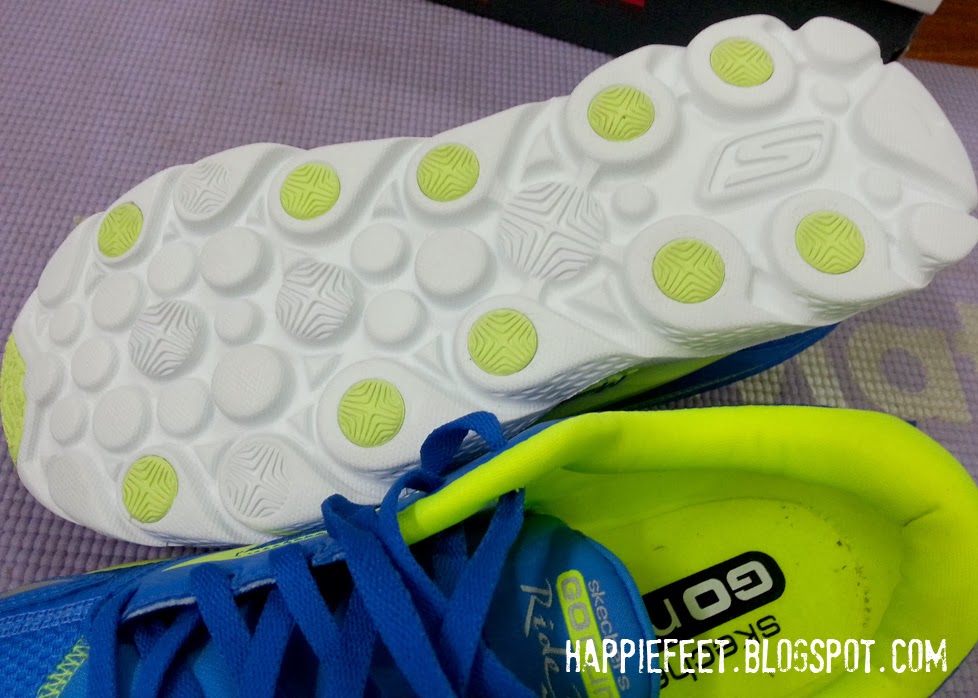 The Skechers GOrun ride 3 comes in at a relatively light weight of 8.4 oz. for the men's size 9, which is only slightly heavier than the GOrun Ride 2. The GRR3 is a 4mm heel to toe drop shoe that comes with a removeable custom fit insole. I've tried the GRR3 in both modes and being one who loves more road feel, running without the insole works best for me. But on a really long run (which I haven't done yet) I'm betting the added cushioning will be more than welcome. The outsole consists of the same propriety enhanced Resalyte® cushioning that looks a little bulkier than the GRR2 but is as flexible as the entire GOseries shoes. The difference this time round is that the GOimpulse sensors and pillars on the outsole are repositioned allowing for a smoother transition. But if you ask me, they work way better in keeping pebbles and stones from being lodged between them. The GRR2 can and does pick up some pretty sizeable debris and pebbles and can be a pain when you have to stop and dislodge them mid run. 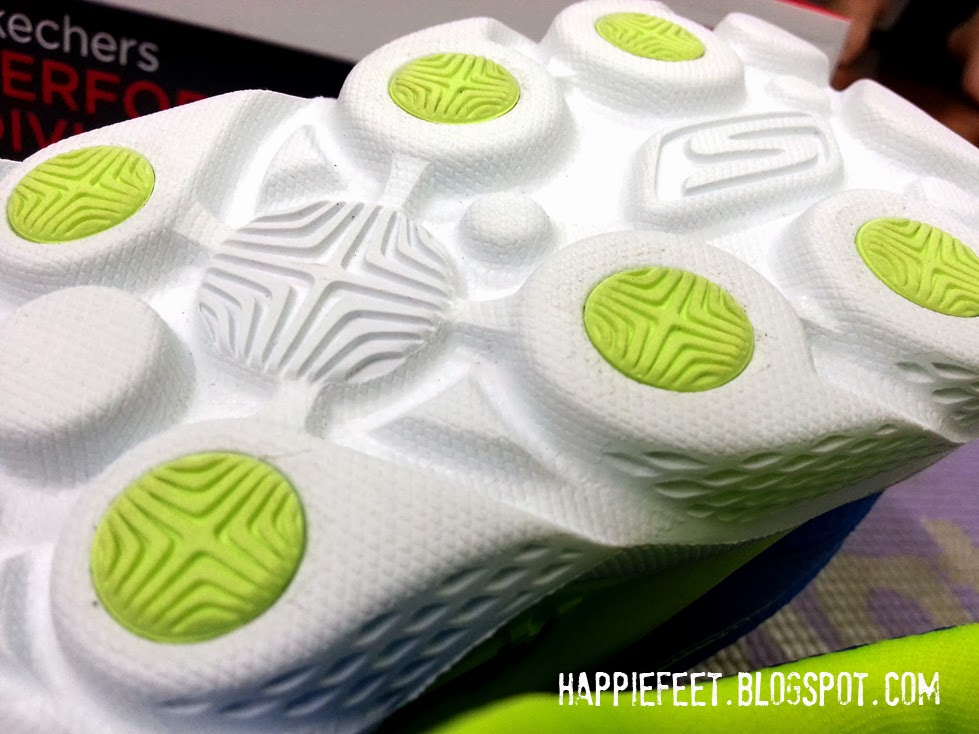 The GOimpulse sensors this time round has been placed a little further apart and is more rounded around the edges than the previous two iterations which were nice debris traps. In the times I've been out running with the GRR3, not a single stone or pebbles was lodged between them and my run route does takes me to some nice pebbly and off road sections at times.

The GOimpulse pillars (or lugs as I call them) are now placed in slightly different positions to give better feedback while running but heck, the only feedback I got was how darned cushy the shoe was. I did mention that already, didn't I? The four pillars in the arch area are no longer joined together like the GRR2 but they still do provide ample arch support. 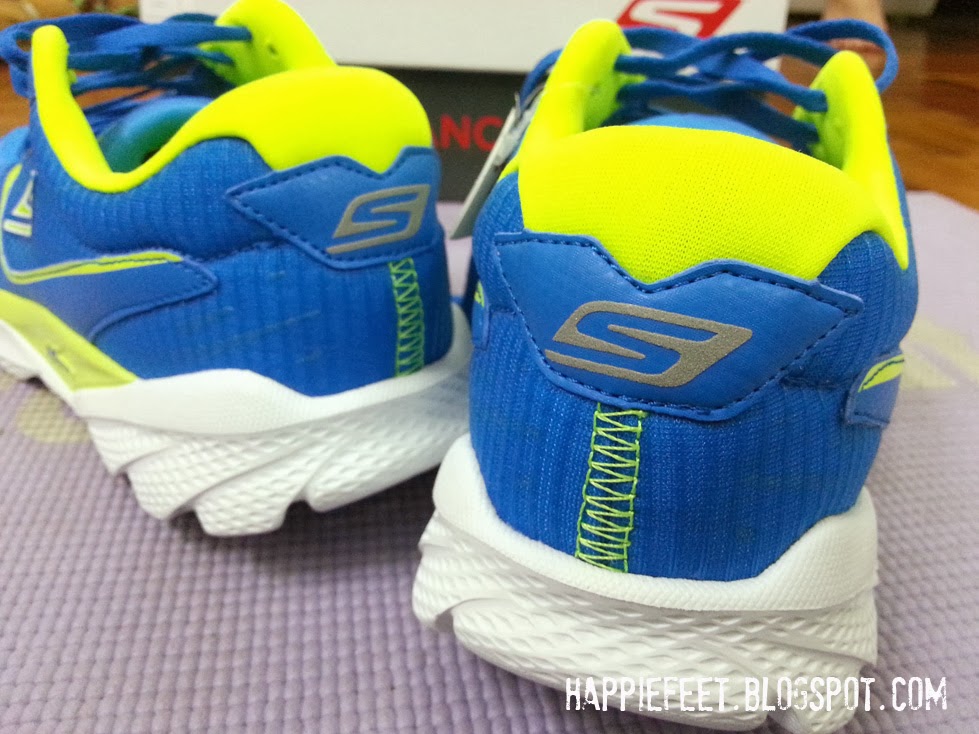 The GRR3 still retains and promote the M-Strike technology of midfoot landing that is apparent in all the GOseries. For a shoe that looks rather bulky and padded, it's amazingly flexible and light. I hardly feel the shoe on my feet during my runs and like I've always advocated, a good shoe is one that you forget is on your feet. 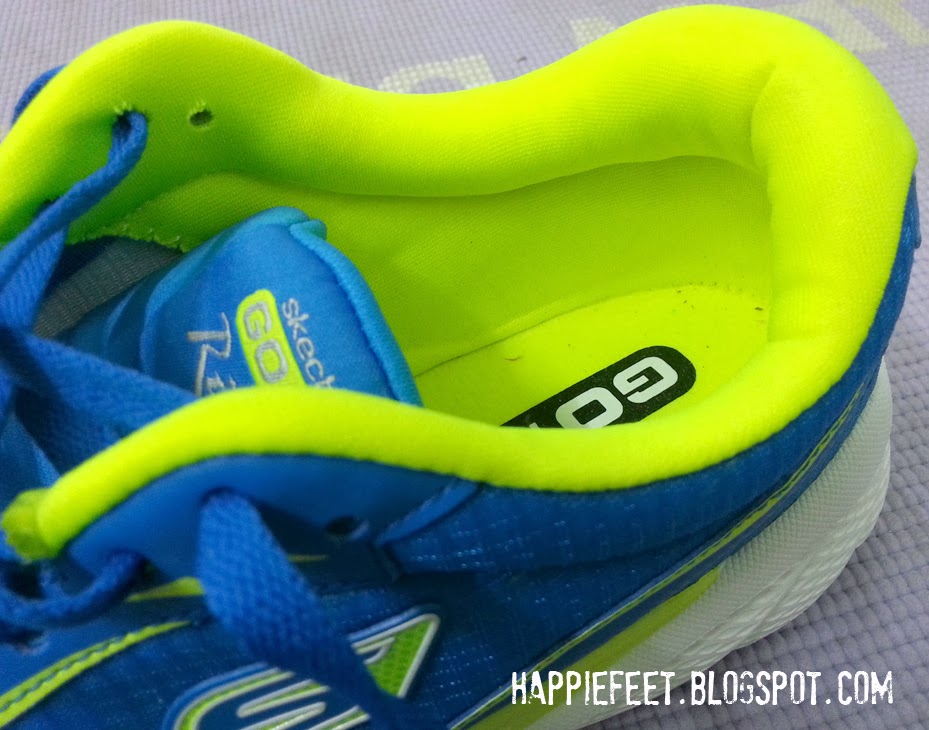 But again, no shoe is absolutely perfect. There are some things I'm not very fond of with the GRR3. I find the tongue to be a little too padded. Maybe taking a leaf of the GObionic or the GOrun 3's tongue would have suited me more, it might even have brought the weight down a little more. But that said, there is still no denying that they're super comfy. 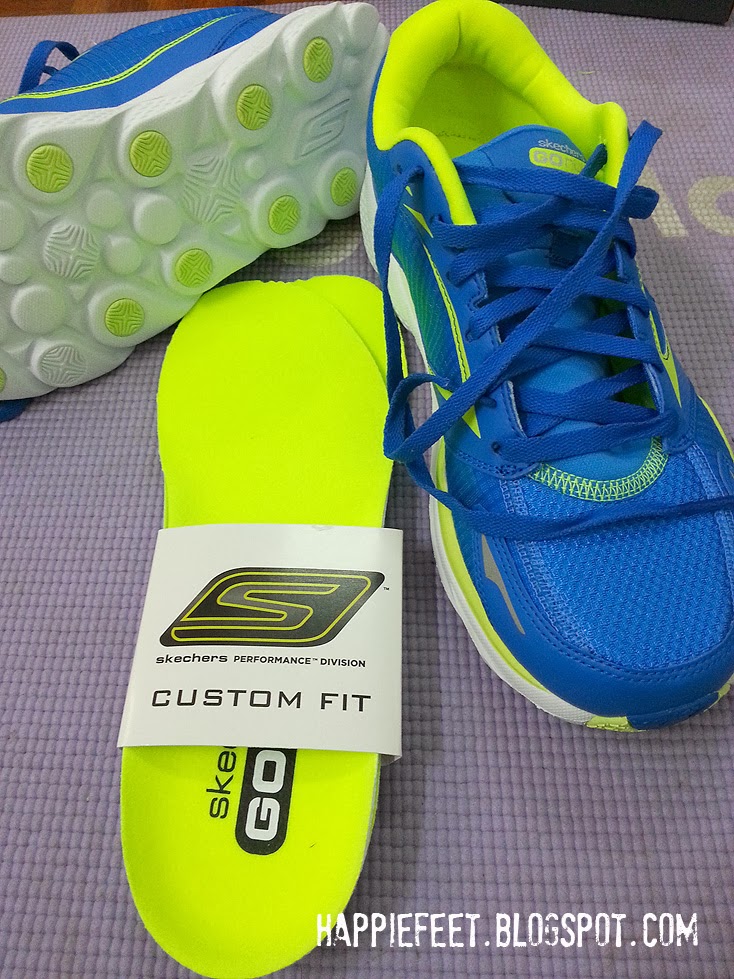 For a bulky looking padded shoe, they don't hinder on speed. They're pretty fast if need be and take pace changes nicely in stride. They don't feel cumbersome and without the insole, you're still able to get that road feel but with just a nice hint of cushioning, which suits me just fine. 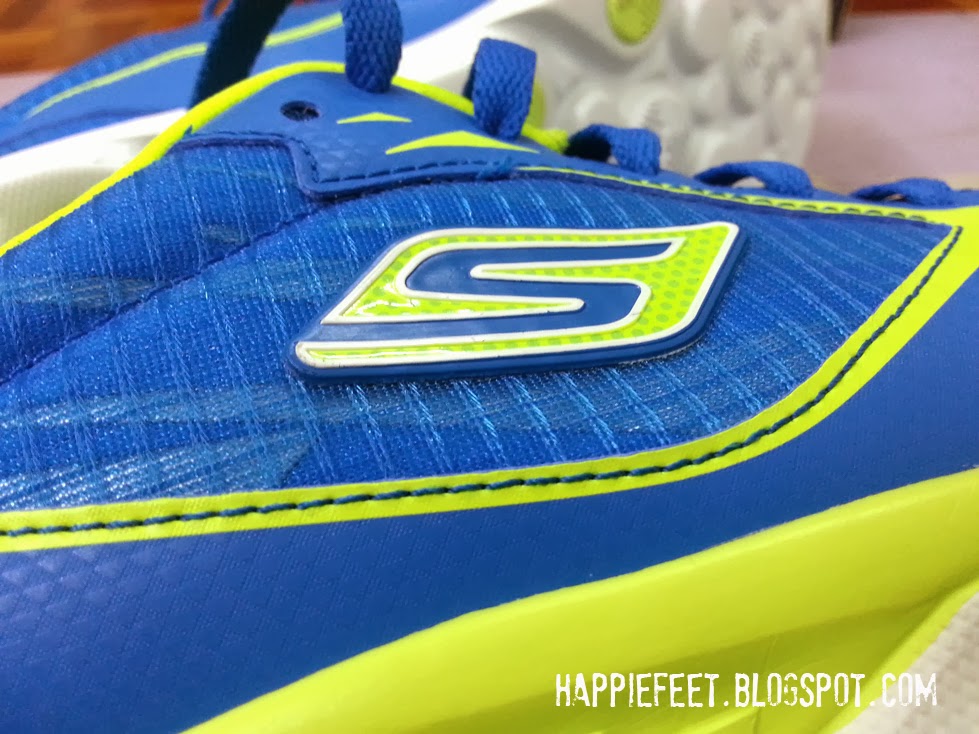 I haven't taken them long yet, the longest I've been with the GRR3 is for a 14k run and they worked just fine. I believe the shoe is at least capable of marathon distance and works well as a pair of regular day to day trainers. If a reasonably price, lightweight but cushioned shoes is something you're looking for, I'd say give the Skechers GOrun Ride 3 a try cos you can't go wrong with it. 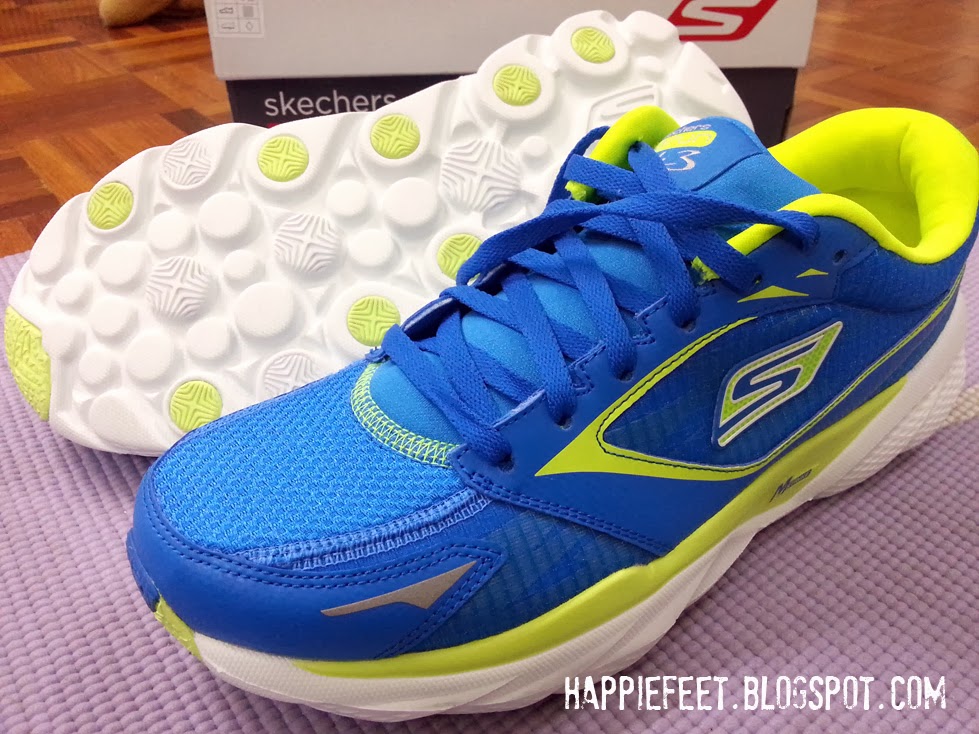