The recently concluded TITI 50/100K road race put me in a little bit of predicament on shoe selection prior to the event. A long race like this needed something with a little cushioning to last the distance and spare the feet as little agony as possible. My entire current shoe range bordered on the minimalist side of things.

It was down to either the Skechers Nite Owl or the Skechers GOrun 3. Both were proven race worthy shoes but I was opting for the GOrun 3 since I've used it for the P50K last year. The Night Owl on the other hand would have been a little uncomfortable in the later stages of the race when the feet started expanding as in the case of the Putrajaya Night Marathon last year. 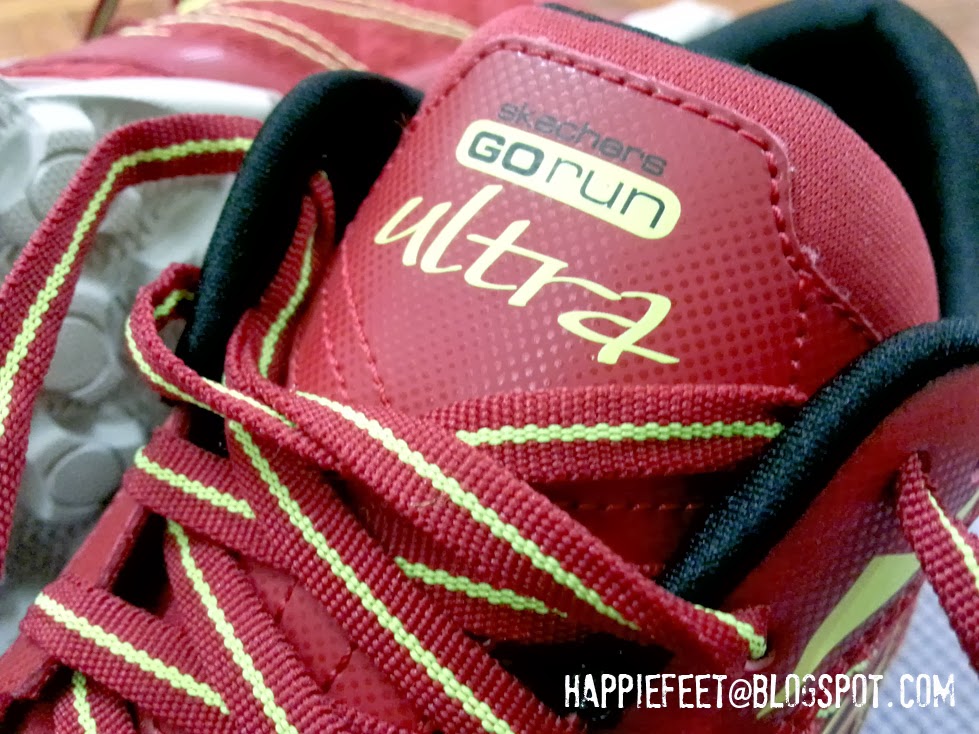 Though the GOrun 3 was '50K' tested, I was hoping for something with a little more cushioning and as fate would have it, the running gods up there must have heard my desperate plea cos about two weeks back, I received word from Skechers telling me that the Skechers GOrun Ultra (GRU) and the Skechers GOrun Ride 3 (GRR3) was ready to be picked up and put through the grinder.

I was ecstatic, my shoe predicament was solved. The Skechers GOrun Ultra was an obvious shoe in for TITI. I've had my eye on the GRU and GRR3 for sometime but wasn't expecting to wear test it this early. I was rather envious of fellow runner, Choon Yuen who could gladly boast of having one of the first Skechers GOrun Ride 3 in this country when he bought his from overseas. 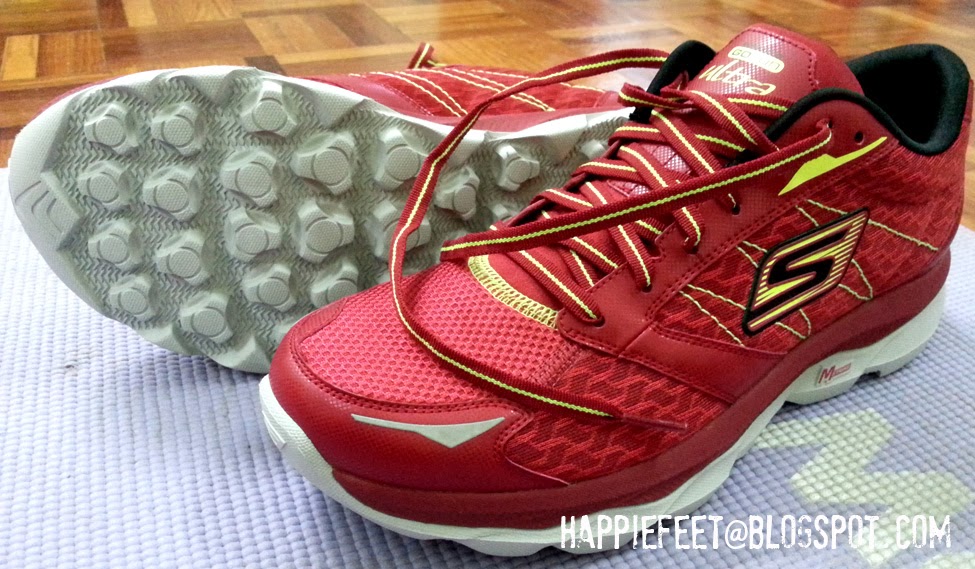 So to have both the GRU and GRR3 at my disposal to wear test was simply a joyous occasion for a shoe nerd like me. My sights were set on putting as much mileage into the GRU before TITI. The GRR3 would have to wait just a little while more before I took it out for some serious testing. I needed to get familiarized with the GRU pretty darned quick.

I started my running in heavily cushioned shoes but for almost close to two years, I've been running in nothing but minimalist shoes. The most cushioned shoe I've been in prior to the GRU was the Skechers GOrun Ride 2 and even that was more on the minimalist side of things. So the Skechers GOrun Ultra would be the first time in almost two years that I was putting my feet into so much cushioning.

My first impression of the GRU was that it made me look tall, dark and handsome ... okay maybe not the handsome part but I definitely felt a little taller ... hahaha! The stack height was definitely way thicker than your regular Skechers series (at least 65% more cushioning according to Pete Larsen). The GRU is an 8mm drop shoe with the insole on but removing the insole gives it a lower 4mm drop feel.

For a shoe this thick and bulky looking, it's still incredibly flexible and light weight at 8.7 oz for the men's size 9. Seeing as how I was planning to use the GRU for ultra distanced runs, I opted to go a size up from my regular 8's to a 9 to factor in feet expansion for prolonged periods of running. Just like the GOmeb Speed 2, I had a little more than desired space at my toe areas but otherwise it was a nice comfortable fit. 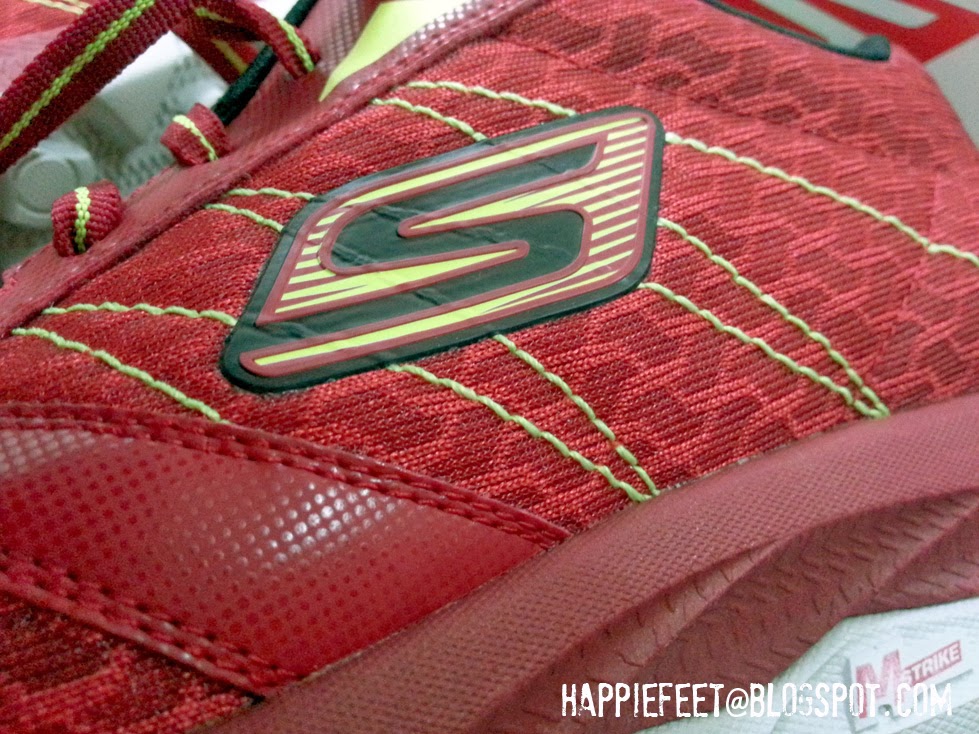 The key feature of the Skechers GOrun Ultra is the enhanced Resalyte cushioning that combines a soft midsole with a more rigid outsole, providing a lot more cushioning and support for your feet. The midsole is soft yet retains enough stiffness to absorb almost everything you run over, even solid huge stones! For someone like me who's pretty used to feeling the road, the lack of road feel was unnerving at first.

The outsole is adorned with an aggressive looking somewhat triangular shaped lugs which are well distributed and provides a very smooth, cushioned and natural feel. Combined with a soft Resalyte midsole and a firmer Resagrip outsole, you get a nice cushy yet springy feel as you run in them. The traction was also pretty solid with a nice grip to almost all sorts of road surfaces,even those littered with debris, which is why I think it'll be a solid trail shoe as well. 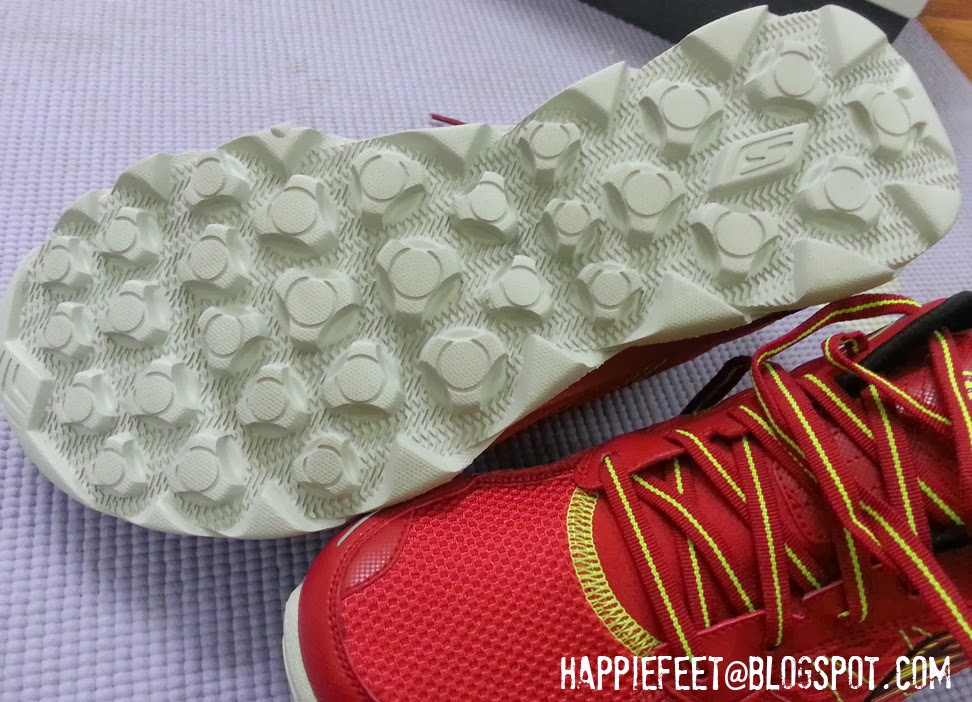 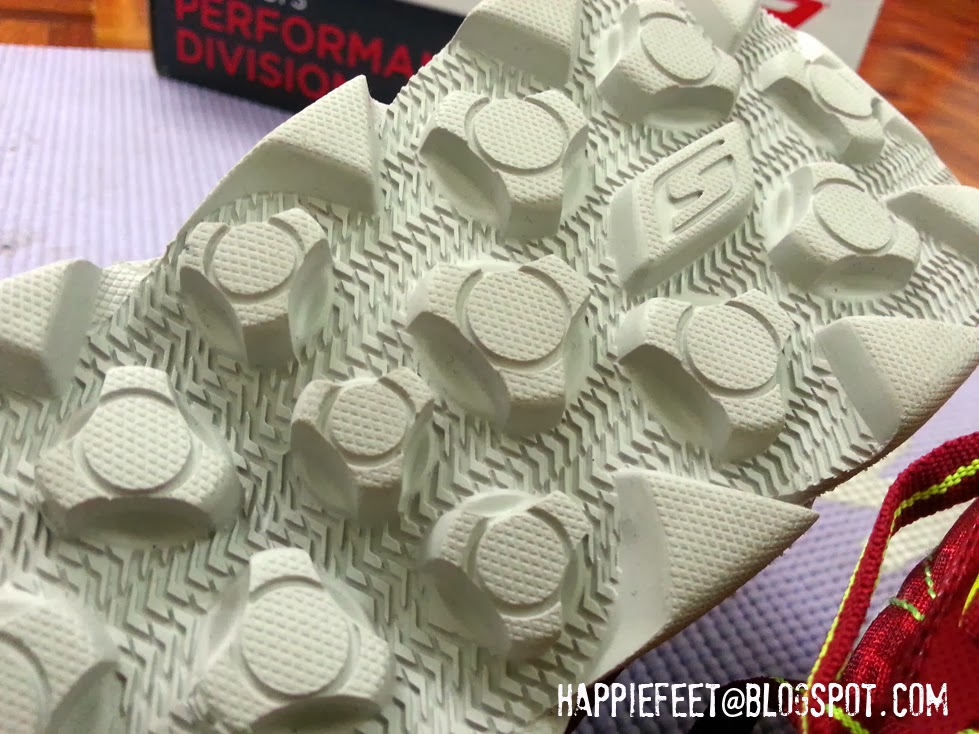 There's enough cushioning in them that you feel like you're running  on clouds. To be honest though, I missed the road feel when running in them. The GRU has been touted as a hybrid road to trail running shoe though I have not tested it in the trails yet. But like I mentioned in the previous paragraph, based on the tread of the outsole, it looks right at home on the trails as well as the roads. Will know more once I take it for a trail run soon.

The upper is constructed of a synthetic mesh fabric with synthetic overlays that provide stability and functionality. I'm not entirely sure but with my sizing up of the shoe, it seems to be pretty roomy which I think is going to perform just fine in the later stages of a really long run or ultra-marathon when the feet tends to swell quite a bit. The upper mesh is pretty stretchy with a relatively wide toebox giving ample toe splaying space with a slightly more snug meshing in the arch for a more secure fit. The GRU breathes pretty well too with no hotspots, blisters or chaffing that I could discern throughout my runs in them. 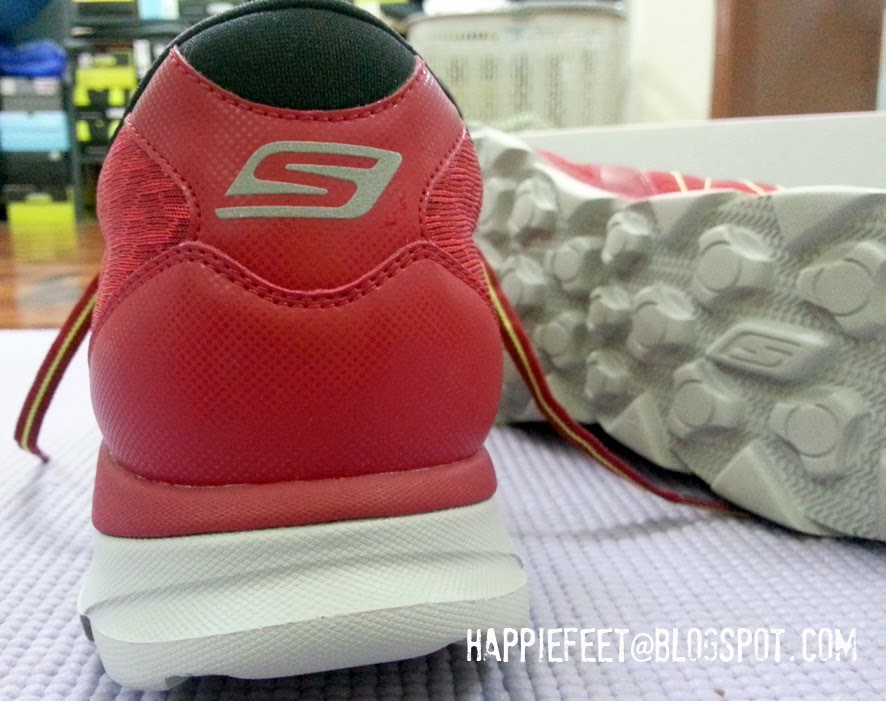 The heel collar was pretty standard. I didn't find anything wrong with it. It kept the heel nicely in place without any slippage even with my upsized shoe. My only issue was that when I ran the shoe without the insole, my heel sunk down a lot lower and I could feel the collar rubbing against the back of my ankle. For someone using a 1/4 crew pair of socks, it shouldn't be an issue but I use a mini crew socks and it rubs my ankle the wrong way. Another thing I notice when running it without the insole is you can actually feel the stitching inside. Again, not an issue if you were using thicker socks unlike me in my thinner socks. 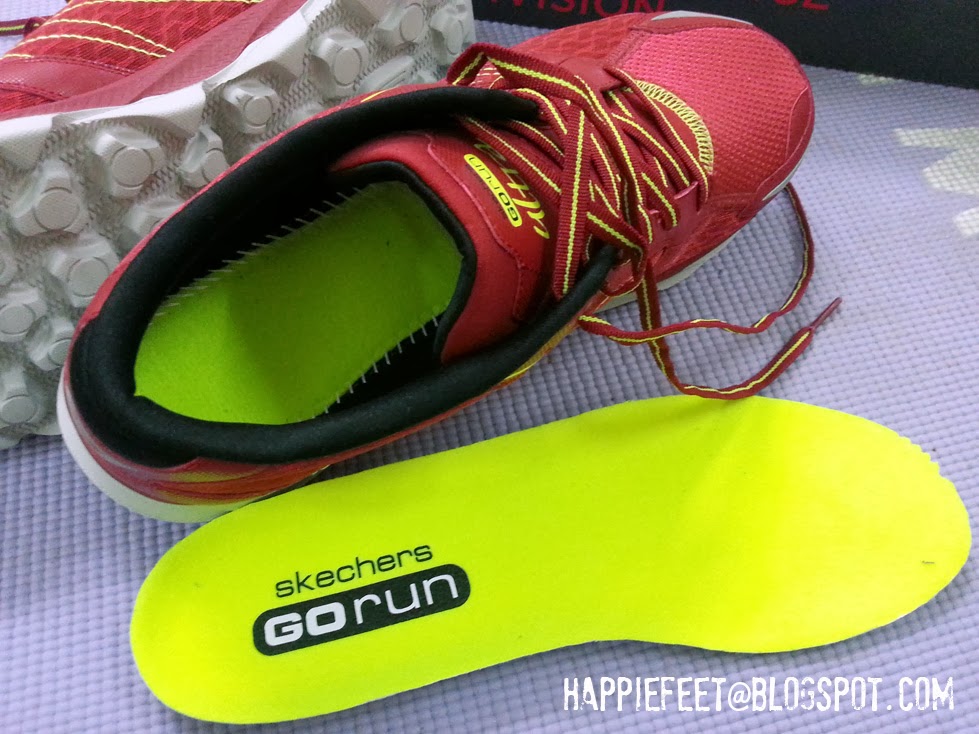 Now, this being a rather 'thick and bulky' looking shoe, you'd be forgiven if you thought you couldn't really apply some speed in your runs with them. I thought so too but was surprised that with all the cushioning and bulk, I was able to ramp up the pace to a quick 4:30 without too much effort. Of course, I can't really sustain that pace for long.

I've so far done close to 80k plus or so in them with the latest being a 54km road race only last night and as much as I'm not a fan of 'maximalist' shoes, I found the GRU to be well suited for running really long distances or runs that keep you out for hours on end. 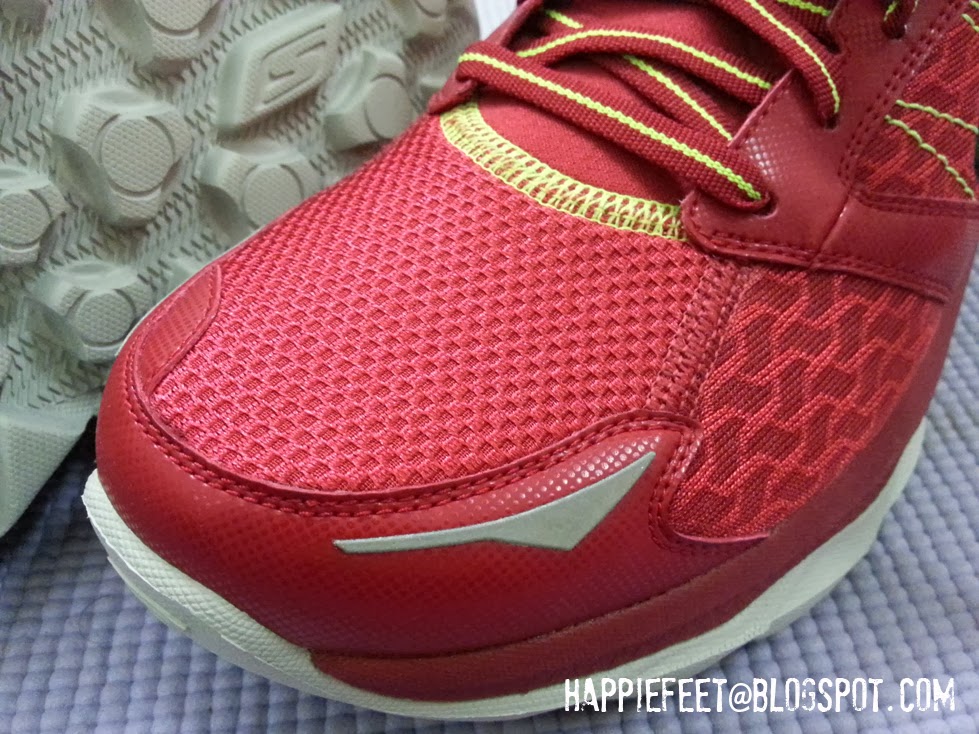 Throughout the entire 7 hours it took me to complete the extremely tough and challenging route, I hardly had any issue at all with the GOrun Ultra. The route had some pretty crazy and long descents and the cushioning was simply phenomenal in absorbing each and every single jarring impact on the feet.

The traction was superb and I was not at all worried about slipping on those long downward descents. I forgot to apply body glide on my feet before the race and was worried that I'd be struck by blister but nada, not a single blister, hotspot or chaffing developed.

The breathability was pretty good too, along certain windy stretches, I could actually feel the breeze flowing through my shoe. The only downside was the durability of the outsole seems a little suspect. Fellow runner Jamie, who ran in the same shoe and me had the back right side sections of our outsoles completely worn off. 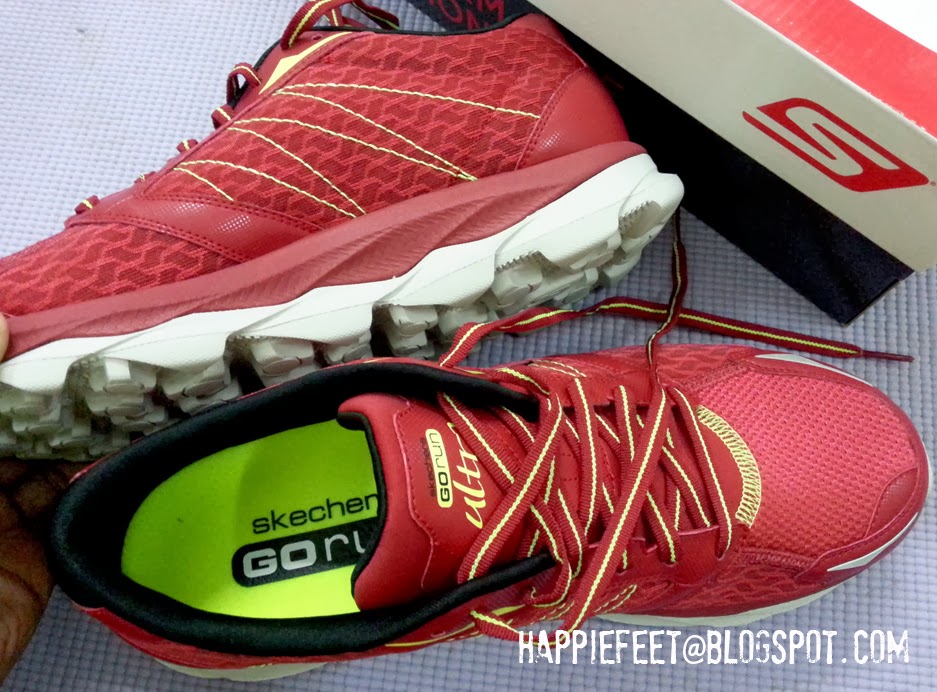 I cannot attest to how well the shoe handles getting wet cos I've not run them in the rain or situations where there's water but some reviews online from other Skechers wear-testers reveal that they drain and dry out pretty good. I'll have to give them a rain test myself one of these days. I'm planning to run with the GRU for a trail run challenge in early March and see how they'll hold up. Will come back with an updated review then.

Is this a shoe for you? I'd say, definitely yes. It's an affordable shoe that is ultra-capable and won't cost a bomb like some of the other 'maximalist' series out there. A super cushioned and highly flexible shoe for putting in the long miles when your feet needs that all important cushioning. A even if you're not an ultra-marathon runner or just a wannabe like me, it works just great as a recovery or simply use them to walk around town. That's how comfy they are. 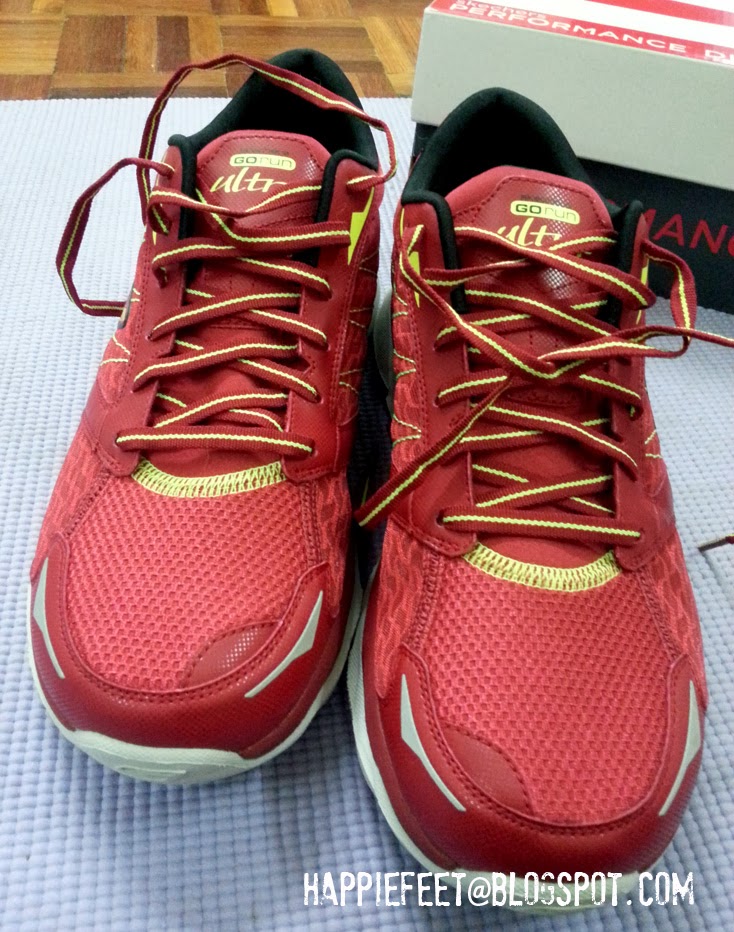 If you're eager to get your hands on the Skechers GOrun Ultra, then you're in luck cos it's going be launched in the stores here tomorrow, 17th February 2014. The men's version is being retailed at RM419 and the women's at RM399. Make a beeline to a Skechers outlet near you and check them out for yourself.