My wife is a funny person. On one hand she complains that I buy too many shoes and on the other hand, she's my source of information for new running shoes that appear in the market. She knows the kind of running shoes that I fancy and constantly texts me to check out new shoes that are launched. How in heaven's name can I stop buying shoes when you keep on feeding me information on them, hon?

In fact it was her who alerted me to the Saucony Endorphin Racer, which was what led me to the Saucony Type A6. Of cos, Jamie had a small part to play by also poisoning me about the shoe. So, after a few FB exchanges with Frank from Running Lab, I got word that Saucony Malaysia had brought in the Type A6 and told him to reserve a pair for me cos he was only getting very limited stock. 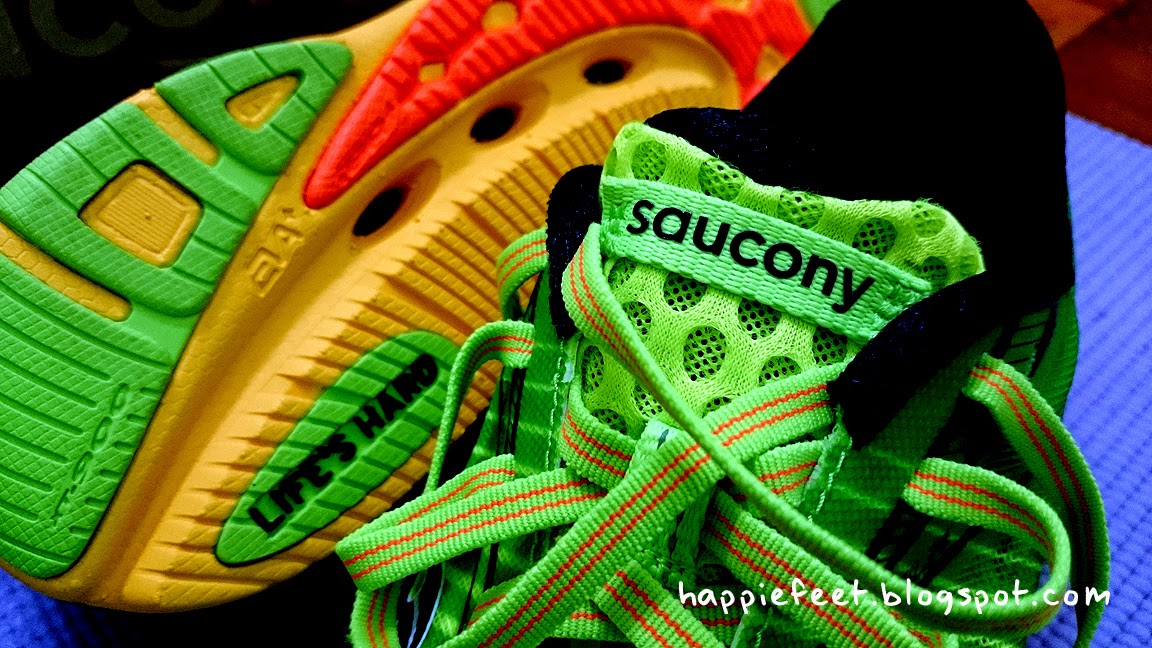 And just as fate would have it, it arrived at his store right smack on the day they implemented the GST (goods and service tax). That didn't deter me and once I got word from Frank, I headed there immediately to purchase the shoe. Frank so kindly decided to absorb the GST this time round and I was grateful for that. I couldn't wait to get my feet in them and clock some mileage.

My first impression of the Saucony Type A6 was the weight. At 5.2 oz for the men's size 9, it was by far the lightest shoe I had ever worn. I've no benchmark to base the shoe against cos I've not tried the previous A5 iteration of the shoe. In fact, this is my first Saucony ever! My review of the shoe will be based on my experience in them, nothing too technical. 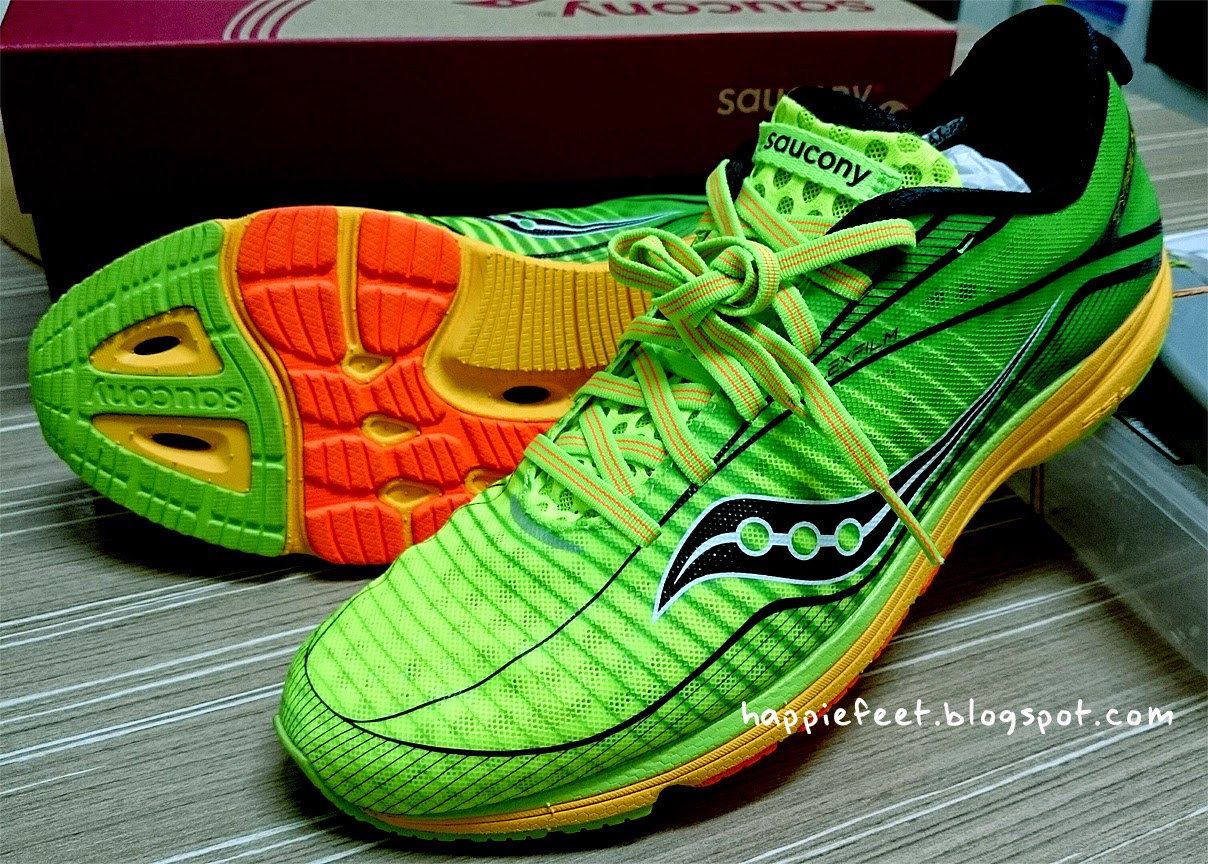 Before I go any further, let me tell you that the A6 is not built for casual running. My first run in them was supposed to be an easy 10k but they were so 'explosive' that I ended up running a tempo! The Saucony Type A6 is a lot firmer than my other two favourites, the Skechers GOmeb Speed 3 and the Under Armour RC Vent but being a racing flat, that's to be expected.

The upper of the A6 is composed of two different mesh materials that are welded together into one layer. The inner soft mesh layer with large holes provides a really breathable feel while the outer mesh has a much finer weave that does an excellent job of keeping tiny debris from entering the bigger holes of the inner mesh. I don't run sockless but with the inner layer being cloth like and soft, I'm betting running sockless in them will pose no issues. The upper is so ventilated that I hardly felt any hotspot in them.


The simple, yet effective upper of the A6 is supported by Saucony's Flexfilm that provides improved lightweight support overlays around the upper. I like the Flexfilm support cos they're so minimal and you hardly feel them around the upper, keeping the shoe very simple, just as a racing flat should be.

The ankle collar which is small and extends about halfway up the heel is not overly padded and is lined with soft fabric making it easy to get a nice comfy fit. The lower height of the ankle collar is not noticeable at all and you won't find your feet slipping out of them, even when you're running at breakneck speeds.

At the back of the heel, you'll find a little piece of elastic that's hardly noticeable that acts as a pull tab to quickly put your shoe on, somewhat like the Skechers GOrun 4's Quick Fit Portal. Personally I like this method better than the QFP. 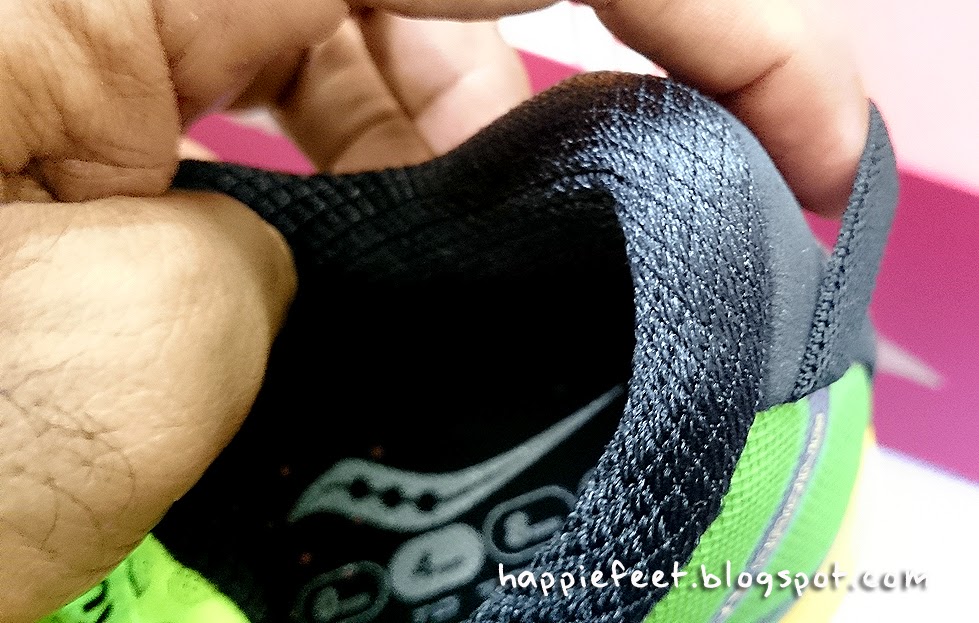 There are some small touches put in by Saucony that I found to be pretty smart. On the tongue, where the Saucony name plate is, you'll find a little pull tab as well that you can slip your finger through and pull up the tongue before lacing them. A little further down the tongue, you'll see another small piece of elastic attached where you can tuck your access laces through to keep them secure from flapping all around. Not a big deal but a nice touch all the same. 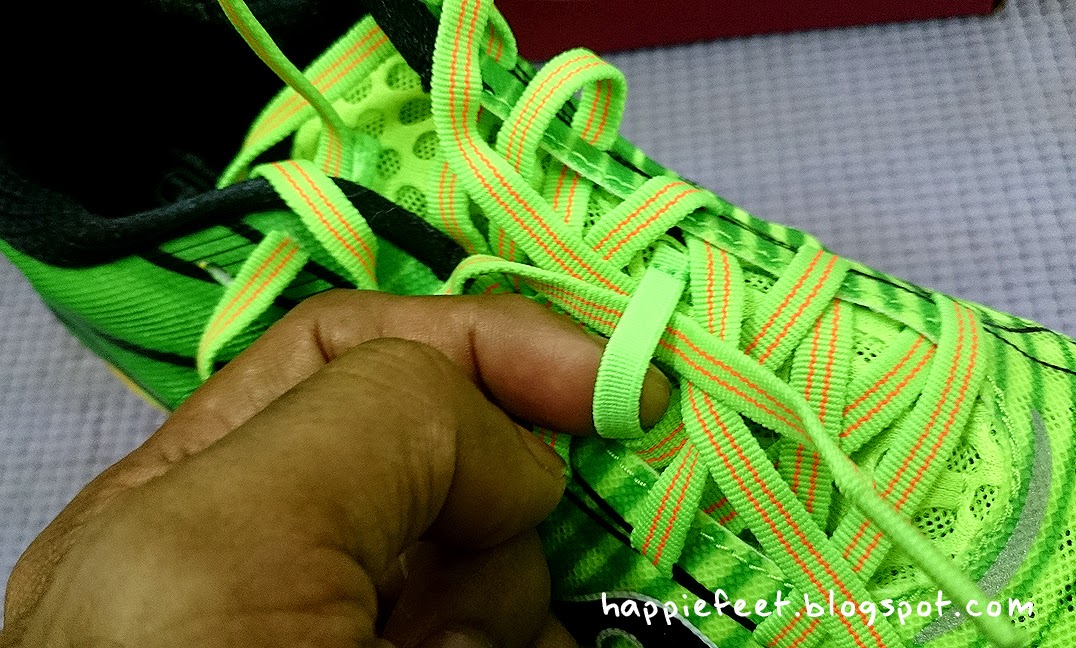 The midsole of the A6 is constructed with something Saucony calls the SSL (Saucony Super Light) EVA combined with an advanced EVA blend. The two combinations of material minimizes the weight of the A6 and maximizes the rebound without compromising the durability of the shoe. It also keeps the stack height of the shoe low with a 16mm heel and 12mm forefoot giving it a drop of 4mm. I've always loved low drop shoes.

On the bottom of the shoe, you'll see some drain holes which had me a little worried. While the holes were there to drain out water as you ran in rainy conditions but what if I just ran in wet conditions, would I be seeing damp socks? Never got the chance to test that theory out cos so far all my runs in them have been in dry conditions. 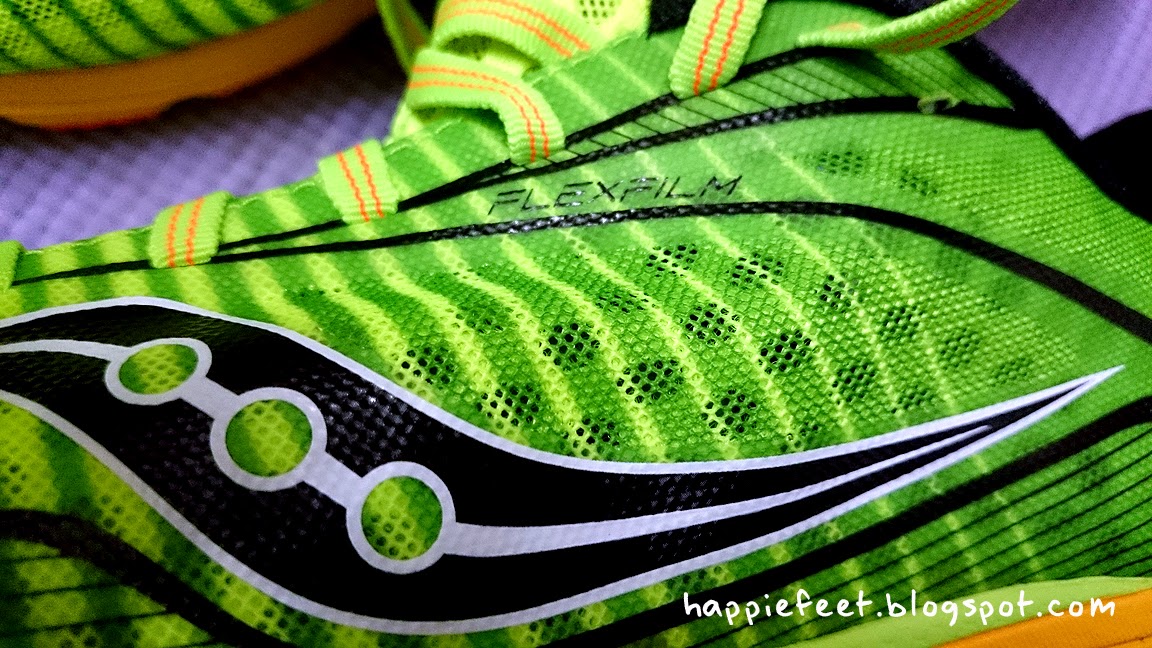 Then there's also the prospects of getting pebbles caught in the drain holes as well. In my opinion, the holes weren't really necessary cos the upper is so minimal that water would just drain out through them, negating the need for the drain holes. But the holes do take away some extra weight so I guess that's good, right?

The outsole is constructed with Saucony's XT-900™, a highly durable carbon rubber compound that provides exceptional traction and an injection blown rubber compound (IBR+) that is light, responsive and offers enhanced cushioning for the A6. You'll also see that some extra rubber has been added over the outsole which I've read that it actually makes the shoe lighter than it's predecessor, the A5. How they made a shoe lighter by adding more material is beyond me but no complaints from me. The durability of the outsole looks to be pretty good. I've used them on roads as well as track work and so far I've not seen any noticeable wear on them. 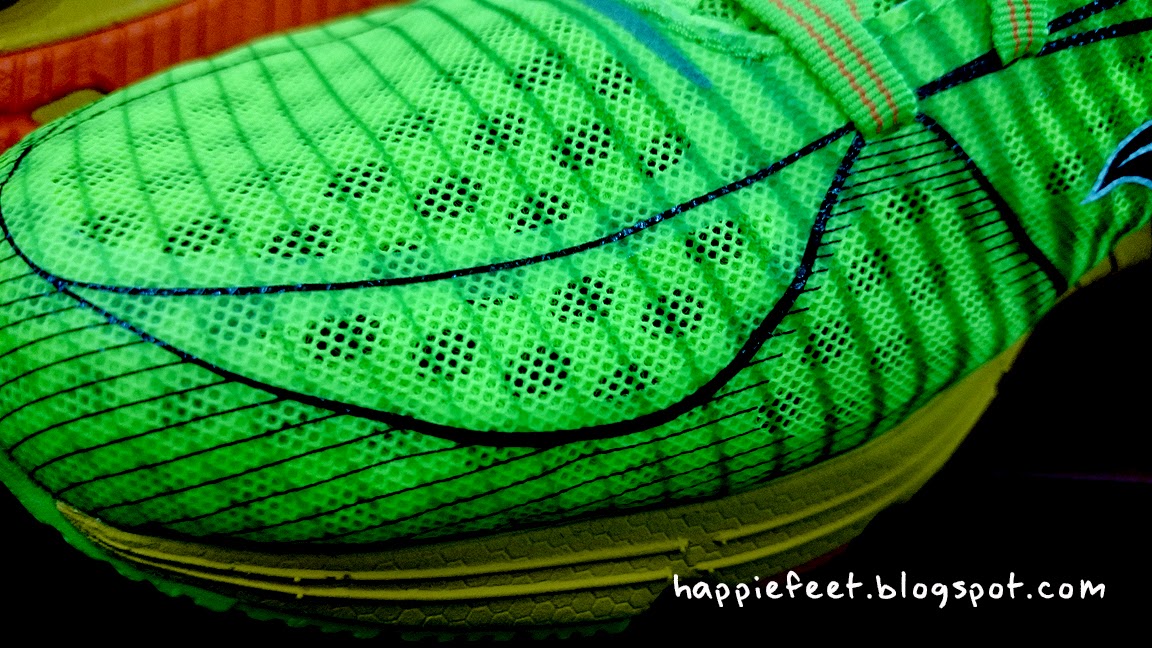 The fit, as with all racing flats is on the narrower side, especially the midfoot section. Surprisingly though, the forefoot, while it looks narrow, it felt pretty roomy, at least for my feet. Those with slightly wider feet might find the fit to be a little restrictive but that's a racing flat for you. I also had to strangely size up from my usual size 8's in other brands to a size 9 for the Saucony A6.

I've run in them quite a bit (around 50k plus) and one thing that really stands out about the A6 is that it's not a 'slow' shoe. It simply screams to go fast. The Saucony A6 though light is a pretty firm shoe. I've so far only used them for shorter distance tempos, intervals or speedwork. They're really good for that but I don't see myself being able to take them out for longer distances. Maybe someone much more efficient than me can make them work for those longer distances. I'll pick much more cushier shoes if I'm going beyond half marathon distances.


Even as I write this post, I just ran a 12k tempo in them the day before and while they were fast, I was feeling the effects of sore calves the very next day. This doesn't happen to me when I do my speedwork in the GOmeb Speed 3 or even the Under Armour RC Vent. I guess I'm just not efficient enough for them yet. They're tough on your feet and if you're not used to running in racing flats or really minimal shoes, I'd say stay away from them or at least ease into them gradually. 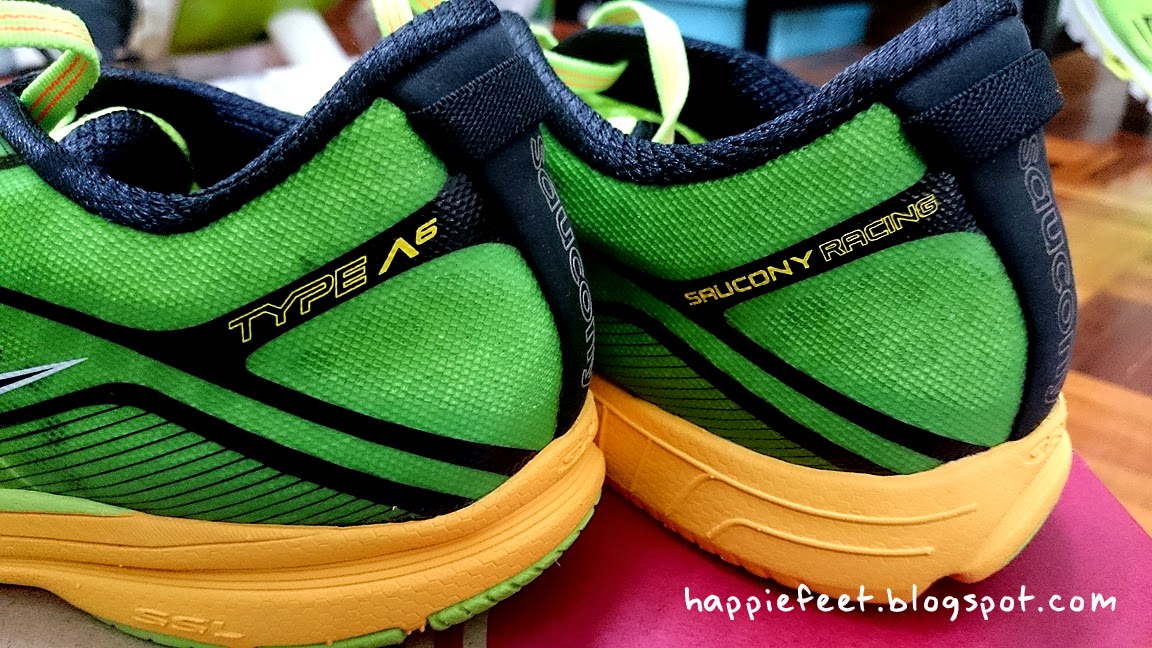 Overall though, they're a good rotational shoe for those days when you feel the need for speed. I'm planning to take them out for 5k or 10k race one day and see just how fast they'll take me. As I keep saying, the shoes is fast, I just wish my lungs could keep up with them! 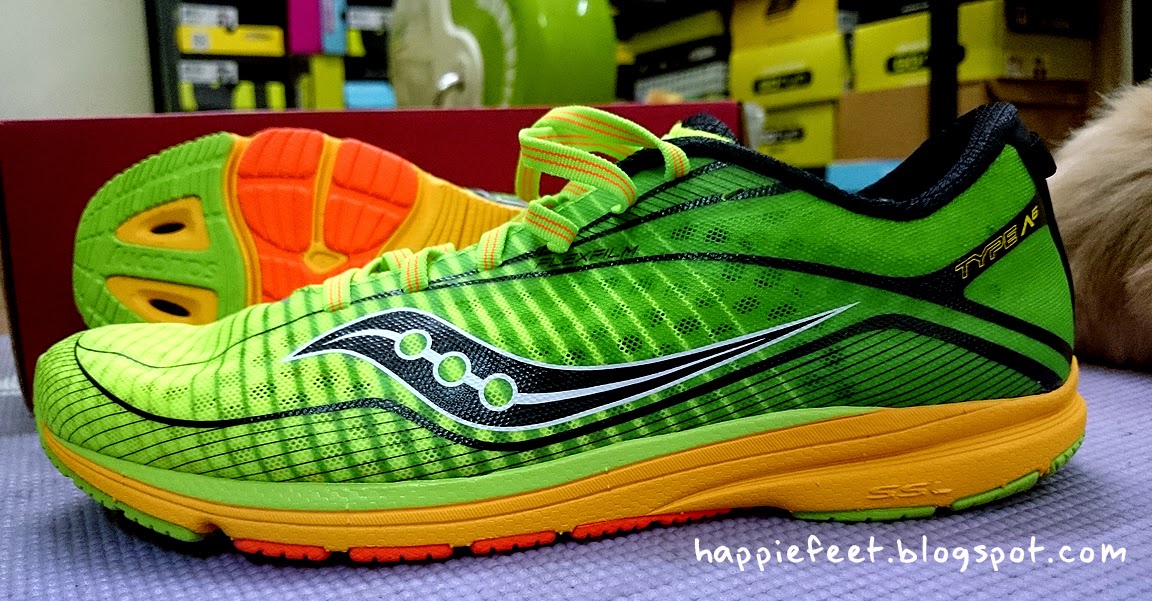 The Saucony Type A6 can only be found exclusively at Running Lab and is priced at RM379.00 a pair. It's actually very reasonably priced for a racing flat compared to other brands of the same class. There are limited number of shoes for both the men and women so if you're interested in a pair, give them a visit. Now to save up enough to get my feet in a pair of Saucony Kinvara 6, which I've heard so much good things about.

Disclaimer: This review is of my own personal opinion and I bought the shoe at full retail price.