With a little more than a month to go for GCAM15, the TM Fan Run (TMFR) was meant to gauge my training. A nice little 15k race in the tough but familiar Putrajaya roads, what could go wrong? At least that was what I thought.

The TMFR was also the younger boy's first race experience. While he's into sports and all that and is even in the school volleyball team, running has never piqued his interest all that much. So the wife and me decided to sign him up for the 5k fun run category to let him taste a little of what we go through during race day.

He was pretty enthusiastic about it and was up at 4am to get ready. We reached the race location around 5.30am and I met up with Jamie at our pre-arranged spot to go for a short 4k before the race before meeting up with Choon Yuen and Jeanie to wait for race start.

Was a little worried initially that it would be a late start cos we had to wait for the Youth and Sports Minister to arrive to flag us off and you know how 'punctual' our ministers are. But credit goes out to him for being right on time and we were flagged off 7am sharp. 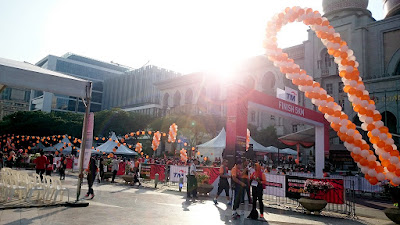 My entire plan was to simulate race start conditions (minus the cold) in GCAM, which was to go for a conservative start. Took off nice and easy at a 6 minute pace along with Choon Yuen and Jeanie. All systems felt fine and I slowly but steadily picked up the pace. It wasn't a race for time or anything today so the pressure was off. By the third kilometer, I was down to 4:47 pace and was feeling on fire. The legs were nicely warmed up and I was ready to take on the initial 5-6km of rolling inclines.

Slowly caught up with the earlier runners with the pace averaging a comfortable 5:00. It's not always I can say 5 minutes is a comfortable pace but today was one of those days. By the time I reached the 8km mark was when things started to fall apart.

Without much more thought, I continued running and just as I turned the corner, I was in for a huge shock! There ahead of me, spanning the entire width of the highway was practically the entire horde of 10k runners. I was dumbfounded. I let out a huge, loud 'OH MY GOD!' that was echoed by a few 15k runners besides me.

How in heavens name was I going to run through them without some heavy duty weaving? Things weren't looking good, not good at all. Nevertheless, I had to go on. The other option was pulling off my bib and walking back the opposite way to the finish.

So weaving left and right, in and out it was. It wasn't pleasant, I elbowed and knocked into so many people that by kilometer 9 when we had to climb up a narrow 2 lane ramp that was chock-a-block with runners was when I officially decided that enough was enough. No way was I going to fight my way through all those people up an incline. It was virtually impossible to get a proper race experience anymore. 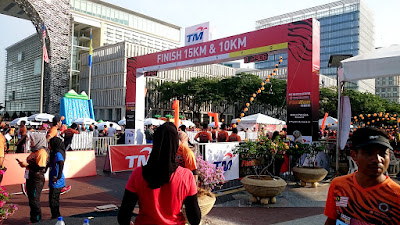 So I walked up along with the crowd, shoulder to shoulder, cursing at the person who thought that merging 7000 plus runners at the halfway mark was a great idea! I've no qualms with the participants, it's not their fault and I know in every race there are people who will walk, take selfies, hold hands and think every race is a fun run but heck, I was pissed with the organizers.

I'm not sure why they plotted the route the way it was, there could be solid genuine reasons but as far as I'm concerned, it was ill thought off. With the 10k participants being released just 15 minutes after the 15k runners, there was sure to be a huge convergence with the 15k runners coming back from the u-turn. I was already doing 5:00 pace and yet got caught up with them, imagine the others behind me. I think the elites themselves just barely got pass.

I caught up with Jamie and we both complained and walked for quite a stretch, disappointed with the outcome. Just as we reached PICC, I decided to head off and salvage whatever I could of the race since the roads opened up a little. But by then, the fire was completely doused. I just wanted to get back to the finish and be done with it. The sun was already blazing as it is.

Strangely enough I still managed to better my one and only previous 15k race years ago with a 1:22 and came in for a 16k finish at 1:26, yes the race was over distanced by 1 kilometer. No complains about that though, value for money :D Got news from the wife that the younger fellow did 34 minutes for his inaugural 5km, pretty impressive timing without training. Now he's totally bushed and gone to bed ... hahaha!

Water stations were slightly further off than what I'm used to in a Hooha organized event and the crew and volunteers were having a hard time catering to huge crowds from the 8 kilometer onward. I wanted to skip the stations but with the sun up, I was parched and had to push my way through to get some hydration. The volunteers and crew though were top notch as always. Kudos go out to them cos I know just how long they've had to wait and set up their stations just to keep the runners going.

This wasn't one of my best races. I seriously think the route plotting could have had more thought thrown into it to make the race experience a little better. Overall though, I was happy with the prognosis of my GCAM training. At this point of time, I've done all I can to be ready and prepared for the race. Let's just hope I can bring all the positives to GCAM and translate that into a good showing.

That said, a good job goes out to Jamie, Choon Yuen, Jeanie and also the lil fellow considering what we all had to go through.