I've been taking part in the PJ Half Marathon as far back as 1989. Back then there wasn't as many road races like what you have these days so if you wanted to race, you couldn't be too picky with races. Being Petaling Jaya bred, this would be considered sort of my home ground race.

I skipped a few of the series cos I didn't like the route and start location they chose but was intrigued by it again this year when they announced a new route and moved the start location back almost near the location of '89. I didn't hesitate to sign up. Of course, the actual route map wasn't out yet but I was still keen to give it a shot. Petaling Jaya is a beautiful place to run and can throw up quite a challenge. 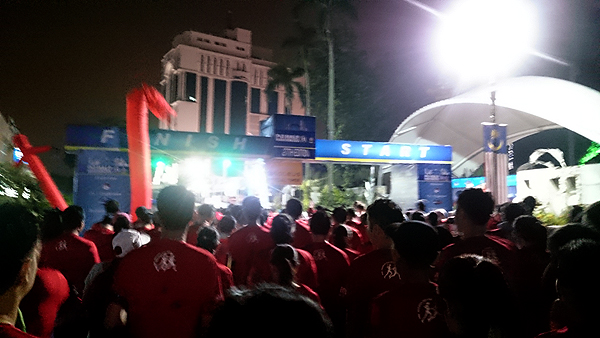 Unfortunately I sustained a stress fracture prior to GCAM15 and knew I wasn't going to be fit in time for the 21km distance and decided to downgrade my entry. I wrote to the organizers asking for a downgrade but was told that I need to produce a medical certificate with an official letter from the doc. I wasn't too happy with that. Here I am asking to downgrade at least a month in advance and wasn't allowed. True, it was in their terms and conditions that they don't allow a change of category but heck, the bibs weren't printed which I know for a fact since I print bibs too so I didn't see the logic.


I decided to downgrade myself to the 10km category and still run the race. The wife was doing the 10km category and I wanted to pace her to the finish. I've never run with her in a race together and this would be a great opportunity to do so. Wait, I can hear some of you saying that it's illegal and all that but heck, I was still using my own bib (albeit a 21km one) and still had my emergency details and contact numbers on it. And it was not like I was going to podium the 10km. I had already decided not to cross the finish and not to take a finisher medal and tee.


The wife and me met up with Jamie, Zijill and Frank at a pre-arranged spot before heading to the start location. I was a little envious of them running the 21km. The route was tough and deep inside, I was longing for the challenge but knew I wasn't fit enough just yet to give it a shot and I promised the wife I would pace her and wouldn't renegade on it.


The race started right on time for the 21km runners and 30 minutes later the 10km was flagged off. I got the wife into a nice easy pace and being raised up around the area, I knew the route and kept her up to date on what to expect ahead. The good thing about an early race start was that traffic would be manageable since we had some intersections to cross. I wasn't very confident with the organizers and traffic management but was proven wrong. They did an incredible job in the handling of traffic!


The first 5km of the route brought us past the Jalan Gasing section which housed some of the older bungalows. A beautiful area that still has large shady trees unlike the newer residential areas these day. The pace was easy. I was on 'tourist mode' and kept taking pictures along the way. This was when I missed GC and the supporters that were out in full force. The entire race was devoid of any supporters save for the hardworking volunteers and marshals along the way. That's the thing about races here, most of the residents along the route find us more bothersome than anything else and if they did come out of their homes, it'd probably be to throw old shoes at us for disrupting their peace.


Though traffic was handled well, I was still worried at certain stretches, especially along the NPE stretch as we were running in the middle of the road with cars zooming by on the left and right of us. The area was coned off on both sides but they are plenty of clubbers returning home at that time of the morning and all it took was one drunk driver to veer off and that was it. Thank god we got through it without incident. I was happy to get off the NPE and head back in the older part of PJ aptly named PJ Old Town.


The wife was doing really well and I slowed the pace a little cos I wanted to conserve her energy for the final incline before the finish just after the Assunta Hospital. Passing the Old Town market area brought back happy memories of my childhood and primary school days. As we turned right at the market traffic lights towards PJ New Town, I told the wife we had just a little way to go. The second water stop was coming up and I stopped to fill the water bottle I carried for her. While I wasn't in need of much water, I thought the stations were a little too far apart with only 2 for the 10km runners spaced out at 4km distances. I passed some pretty parched runners who were desperately looking for the water stations.


Just as we made our way across the Assunta Hospital roundabout, the final inclined loomed. While it wasn't all that steep, it would still pose a problem to many. Lots of runners were already walking up and I slowed to a stop to walk it up with the wife. She was already feeling tired and I wanted her to reserve her energy for the final 600m push to the finish. Once we got through the incline, we headed back into a run to the finish. One last left turn with a short uphill and the finish gantry loomed.


She cursed the final incline, sucked it up and gave it all she got to race to the finish. I quietly pulled over to the side of the road just before the finish to wait for her and the rest of the gang at the pre-arranged spot. Though there wasn't a finisher medal nor tee waiting for me and my status would be shown as a DNF, I was still happy. Getting to run with her for the first time in a race together to the finish more than made up for all that. We've run races but never together so this is a first and holds a lot of meaning for me.


Congratulations goes out to Jamie, Frank and Zijill on their 21k finish which was easy peasy for them. I spared a thought for you guys knowing you had two or three tough inclines to tackle. Better you than me ... hahaha! A huge kudos goes out to the organizers and volunteers on a race well run. I'm still pissed at the organizers for not letting me downgrade but credit where credit is due. It was a good and well handled race!