My first impression of the Skechers GOrun Ultra Road (GRUR) was that it was a 'big' shoe. I wasn't really expecting to get a feel for it so soon but when Skechers Malaysia dropped a pair on me, I was as excited as I always am when I get to try out a new pair of shoes. 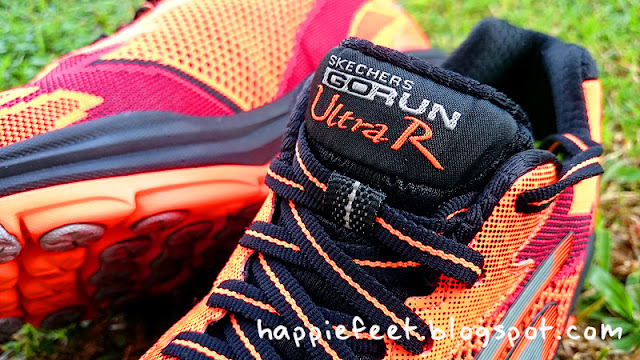 The GRUR was developed from the basis of the original GOrun Ultra, a decently flexible, light (for all its bulk) and well cushioned hybrid of a shoe that could take on both the trails (less technical ones) and road. But with more runners taking them out on the roads rather than the trails, the outsole wore down pretty fast.

After the second iteration of the GRU, which maintained the same outsole and also wore down pretty fast on the roads, the Skechers GOrun Ultra Road was conceived by adding strategically placed rubber pods in key strike zones for more durability and abrasion resistance. The GRUR is specifically aimed at total road running and with the added extreme cushioning (I'll come to that later) would perform well in long hot weather races such as 100 milers with ease. That's just my observation cos I have no intention of taking them out for 100 milers! 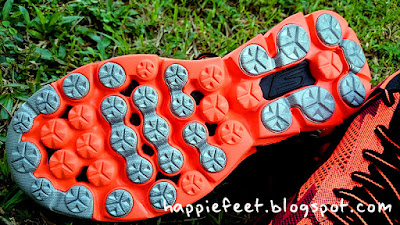 The Skechers GOrun Ultra Road in my opinion is a special beast of a shoe. Though in theory a 4 mm drop shoe but with a stack height of 26 mm forefoot and 30mm heel, this is one extremely cushioned shoe. Weighing in at 10.4 oz. for a men's size 9, it's not too bad for a shoe of its category though I found it to be a little too heavy for me.

The GRUR is a complete revamp of the original GOrun Ultra. The upper of the Skechers GOrun Ultra Road is designed with the Skechers Performance FITKNIT® technology providing a breathable and comfortable fit. A completely knitted upper without any overlays and seams, save for the bonded logo on the lateral side. It's completely runable sockless though I won't vouch for it cos I don't run sockless. Four reflective elements adorn the back of the shoe with two on the front. 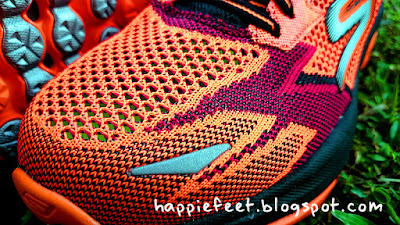 While the FITKNIT® upper did all it claimed to do, I found the fabric to be pretty stiff unlike the more stretchy FITKNIT® upper of the Skechers GOrun Bolt, which I simply love by the way. The upper was roomy enough for my toes to splay and had plenty of overhead toe room so the stiffness wasn't too much of a bother but I'd have preferred it to be more stretchy like the GOrun Bolt.

While the knit was a lot more 'closer' in the support area of the GRUR, a much 'looser' knit was apparent in areas where breathability and draining is required. The variable density of the knitting served different purposes of maximizing the airflow over the foot yet providing the necessary structure to keep the foot well supported during your run. 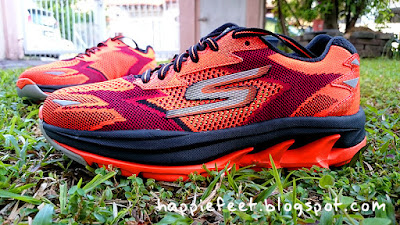 I did have two little issue with the shoe on my first run where I developed a blister on the top of my right small toe and felt the right heel collar rubbing against the back of my ankle. I very rarely get blisters and this was a concern for me. I first put it down to maybe a defect or loose piece of knit around that section but later discovered it was my old, stiff socks that was the culprit for both the issues. A change into a much newer pair of socks quickly cleared up both issues though I thought the heel collar was a tad too high for my liking. 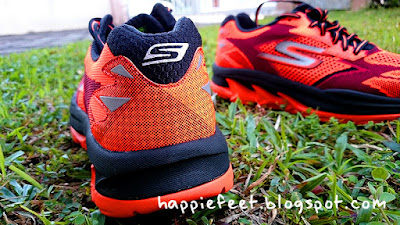 The midsole of the Skechers GOrun Ultra Road is what makes it a lot more different that its older hybrid sibling. The GRUR is made up of two layers, a relatively soft underfoot foam with a thinner layer of the proprietary Resalyte® foam. The dual density Resalyte® provides maximum cushioning for the feet. Too much cushioning for me that it looks almost as thick as the Hoka's out there.

Two drain holes are noticeable on both the lateral and medial sides slightly towards the back of the shoe for unrestricted draining of water should you submerge your feet in a huge deep puddle of water while running. Perforation on the insole also helps with the outflow of water to these drain holes. Aside from draining water out from the shoe they do assist somewhat in providing unrestricted airflow through the shoe. 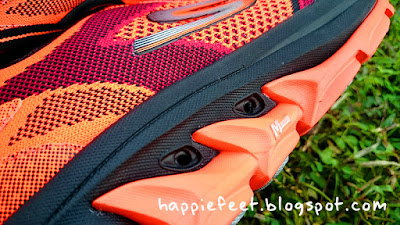 The outsole of the shoe is a completely different build up from its predecessor. This time around, the outsole looks more in line with the rest of the GOrun series in a sense that it has the firmer and more resilient GOimpulse sensors placed strategically around the outsole for added durability. I've always said the durability of the Skechers GOrun series was a little lacking especially around the lateral side of the shoes but the wear this time around seems to be way better.

The GRUR felt firm underfoot. It wasn't as flexible as the usual Skechers fare but it was as flexible as it could be for a shoe with such thick cushioning. Road feel though was completely non existent as to be expected with the amount of cushion you had on. For someone with a small Asian build and skinny feet like me, the shoe looked humongous on me. They actually weighed heavily on me as I ran in them. I guess I'm so used to running in the much more minimalist shoes. Personally I feel the Skechers GOrun Ultra Road would be perfectly ideal for someone with higher volume feet. 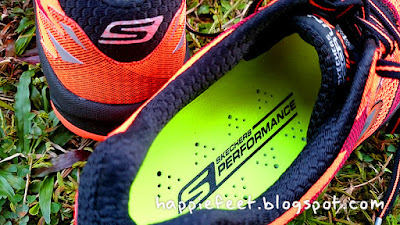 I've done a few runs in them and came away with mixed feelings. Like I said earlier, I'm more accustomed to the more minimalist or racing flats that anything with a higher stack height and tons of cushioning simply don't work all that well for me. I found it clunky, heavy and being a lot 'taller' than my usual lower drop fare, I had to be a lot more careful when I had to make sudden turns during my runs for fear of twisting my ankles. My feet also tired out a lot faster due to the weight. 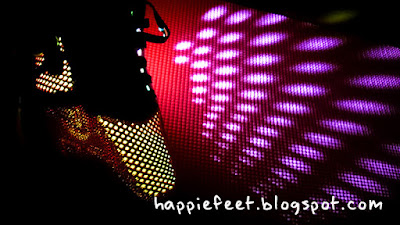 That said, it's a not a bad shoe really. Someone with a different build from me will be able to carry the shoe just fine. And with the extreme breathability of its knitted upper, running a long hot or wet weather run or even an ultra distance race at a slower pace would be perfectly ideal for the GRUR. For me, they're good as a recovery shoe or on days when I just want to go really slow and easy. 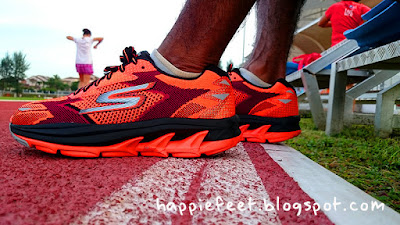 The Skechers GOrun Ultra Road is currently not available locally yet but when it does, it'll be retailing in at RM539.00 for the men's and RM529.00 for the women's. Once I get wind of the release dates, I'll add it to this post.

NOTE: The Skechers GOrun Ultra Road retail price has be revised to RM499.00 for the men and RM 469.00 for the women and will be out in stores nationwide this week. Good news, if you ask me :D