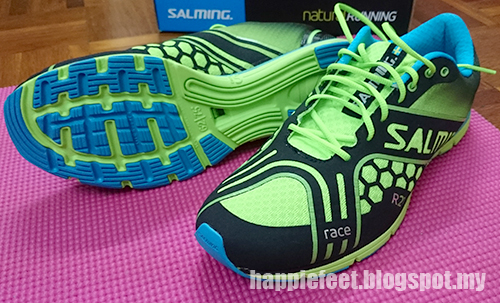 Salming is not a running shoe brand many of you would be familiar with in Malaysia. In fact as of May this year, the shoe wasn't even available in Malaysia. I came to know about the Salming brand when Stefan Albinsson, one of the ambassadors of Salming Running started writing reviews of the shoe on his blog, The Running Swede. Being a shoe geek, that piqued my interest and I was hoping to get my hands on a pair of Salming to try on.

It wasn't until this year that I finally got my hands on a pair of Salming running shoes. After a quick round of messaging with the local Malaysian distributors, I purchased the Salming Race R21 model from them. I love trying out new shoe brands and I was pretty excited to finally get my hands on a pair, especially one that falls into the racing flats territory.

When I first picked up the shoe, what caught my attention, aside from the color was how light it was. From the pictures I've seen of them, I'd have expected them to weigh much heavier than what I had in my hands. I was impressed. I've always loved light weight shoes. The US8.5 (which I sized up from my regular size 8) I had in my hands weighed a paltry 6.5 oz! It felt almost as light as the 5.2 oz Saucony Type A6 that I had! In fact, the Race R21 was almost similar to the Type A6 in many ways but with cushioning. The Saucony Type A6 can be tough on the feet but the Salming Race R21 is a much more forgiving shoe.

The upper of the Race R21 features a 2 layer construction which adds durability while keeping the weight at a minimum. A breathable mesh is overlaid by something Salming calls an Exo-Skeleton that hugs the foot, adding some extra stability and support. I don't really like too many overlays on a running shoe cos it'll just make the shoe less breathable but the Race R21 welded Exo-Skeleton construction didn't pose any breathability issues, in fact, it was decently airy during all my runs in them. I also like how it locks your foot in place nicely enabling a quick and responsive running experience. 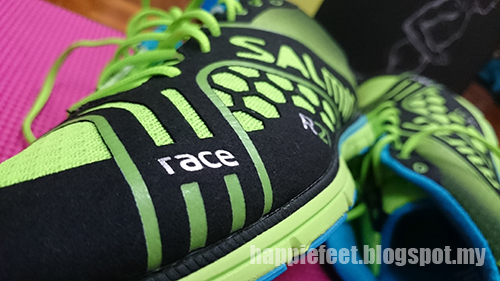 The fit of the shoe was another surprise. It looks a little narrow but once you slip your feet in them, they don't feel as narrow as they look. But that said, they're not also the widest shoe on the block. I know I'm contradicting myself but it's a little hard to describe, they're somewhere in between, though it fits my feet real well. Then again, I'm blessed to have feet that fit into almost any kind of running shoes.

The upper of the Race R21 sits atop the proprietary RunLite™ midsole that features a special high abrasion injection EVA that's designed to flexibly respond to the road surface in order to get a race like feel. Built into the midsole is something called the Torsion Efficient Unit™, a lightweight carbon fibre plate similar to the ones found in the Skechers GOspeed series. The TEU adds some sturdiness to the shoe giving it a bit of a snap on takeoff. 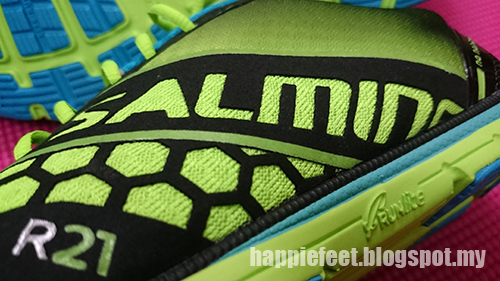 The Salming Race R21 is a 5mm drop shoe but feels a lot closer to the road than the drop would indicate. This is due to the extremely low stack height of the shoe. I can't find any info on the measurements of the stack height though I can attest that it rides lower to the ground. Like I mentioned earlier, it feels like a Type A6 and you can feel the road but has that added bit of cushioning for protection and comfort.

The outer sole is made up of an improved lightweight rubber compound material that provides remarkable grip even on wet slippery surfaces. All my runs the past week have been on wet after rain road conditions and not once did the Race R21 lose traction even when I ran on slippery pavement. 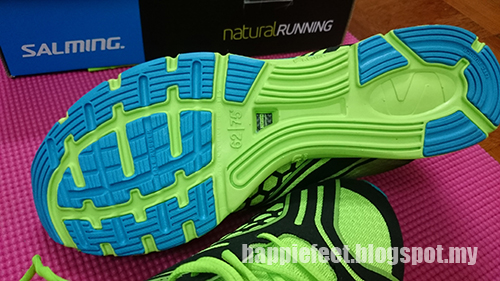 The outsole flexibility like all racers are a little on the firmer side so you can toe off much faster during your runs. Just above the TEU, you'll notice the numbers 62/75°. This represents the distance from the heel to the ball of the foot which Salming puts at 62% of the shoe is designed for extra stability and ends at the so called 'ballet' flex line, at a 75° angle. From this flex line, Salming has equipped the shoe with greater flexibility, assuring that the 62/75° feature bends in exactly the right places to simulate the foot's natural forward and lateral movements. 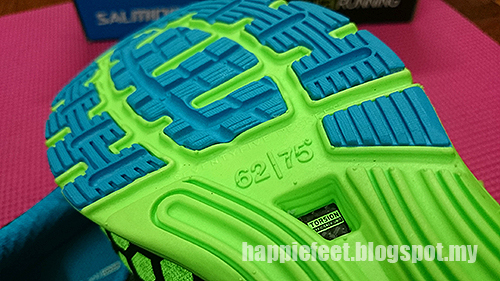 The heel cup has a nice snug fit. The collar and tongue provide just the right amount of cushioning that it doesn't 'squeeze' on your foot. The laces are the rounded kind and I always have this fear that rounded laces tend to come undone easily but in all my runs, the laces stayed knotted. You can slide the laces through the band on the outer top of the tongue with the Salming logo which keeps the tongue in place securely.

I've so far used them covering a distance of close to 80km and have come to love the shoe. The Salming Race R21 is in my humble opinion an excellent racer, built low to the ground but with ample cushioning to protect your feet as you speed along the roads. I would normally not recommend a racer for long distance races but with the Salming Race R21, I'd say it could easily take on a half marathon (and a full marathon if you've strong legs) without too much trouble. But for the shorter and faster runs, the Race R21 simply excels! It's also ideal for tempo and interval sessions on the track and will now play a huge part in my rotation of racing shoes. 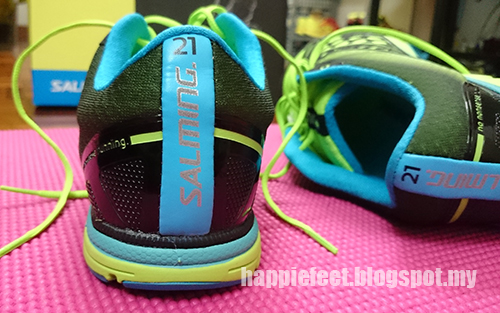 I can't attest to its durability cos I've so far only used them for slightly more than a week but based on what I see, I'd say they're a pretty durable pair of shoes. Even after more than week with them, the outsole still looks pretty new, unlike a few other brands that I know. But with the mileage I'm doing these days, let's really see how durable they really are after a few weeks.

The Salming Race R21 is clearly a well thought out shoe. It's comfortable right out of the box and takes very little getting used to. It's lightweight with just the right amount of targeted support for your feet. If you're looking for something different in a racer, I'd say give the Salming Race R21 a shot. But, as with all minimalist and racers, some conditioning of the feet is needed to be comfortable in them so as to avoid any injuries down the road.

At present, Salming running shoes can only be purchased online through the official Salming distributors here at Salming MY-KL. Drop them an email at salming.my.kl@gmail.com for more information on their range of running shoes and apparels. If you're in the Klang Valley, you can make arrangements with them to view and get your right size for the shoe cos I suspect you might have to size up from your current regular shoe sizes. 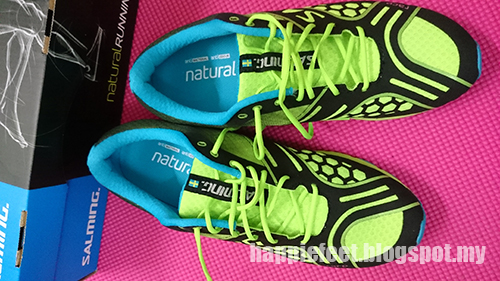 There is currently a promotion going on for a few specific models (Speed/Xplore/Race), so hurry on over and check them out. My pair of Salming Race R21 was purchased at a promo price of RM280.00 from the original price of RM350.00, a pretty good deal if you ask me and with a free pair of socks thrown in! Now I've got my eye set on the Salming Distance/Distance A3 and Speed models as next in line.

Disclaimer: This pair of Salming Race R21 was purchased personally by myself for this review.