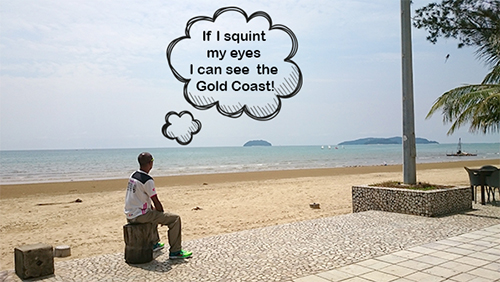 The recent bad hazy spell that has been enveloping the country has really scuttled my comeback training plans quiet considerably. Runs have been very sporadic to say the least. I may be passionate about running but I also take my health very seriously and will not step foot out there to inhale anymore of that bad smoky haze than I have too.

These are times when I wish I had access to a gym but I'm not willing to pay the exorbitant gym fees and ridiculous contracts that come attached with it. Lots of races with some high profiled ones, have either been cancelled or postponed with many disgruntled runners screaming bloody murder at the organizers for making the decisions to cancel these races. Some of the rants are justified and some are just plain stupid but everyone has a right to say what they want I guess.

Personally, the cancellations hasn't affected me race wise, save for one cos I hardly sign up for races these days. With two confirmed marathons lined up three months apart the first half of next year, I'm putting more effort into the training that's required for it.

The evening heavy rains the past couple of days has been very welcomed. It has at least cleared a huge chunk of the haze and made the mornings absolutely beautiful to run. I've been getting some very consistent mileage again since the rains started and I'm hoping that the haze has finally gone away for good so I can really get down to a proper training plan which I need to draw up real soon.

Fitness wise, with the sporadic training I've been having before the rains, I'm far from where I was prior to my stress fracture injury. While the legs have not forgotten how to run and I'm still able to kick up a decent speed for the shorter runs, the endurance and stamina has taken a considerable beating but with the current consistent running I'm doing, my endurance and stamina seems to be improving steadily. A lot of work still needs to be done but I'm quietly confident that I'll get up to speed in time.

That said and done, I still have three races that need to be fulfilled for the year, the Mizuno Wave run which has been postponed because of the haze, the Amnig 'I am Warrior' run and the Putrajaya 52K. The first two events mentioned are no biggies but the P52K on the other hand is another matter entirely. I'm definitely under trained for it and only signed up cos of a certain 'chef' who wanted company to run, though if you asked him, he'll tell you otherwise. The GC group will see three runners including myself running the event. I'll won't name them in respect for their privacy but at least I'll have company throughout the night.

But in all honesty, I'm doing the P52K in honour of a running friend who recently passed away, Zack Zakaria. A nice fellow with a friendly disposition who shall be sorely missed. I'm not holding out much hope for my performance during the P52K. I'm just planning to have fun with my two partners in crime and hopefully that 'chef' fellow will be able to keep us awake through the night with his stories :D